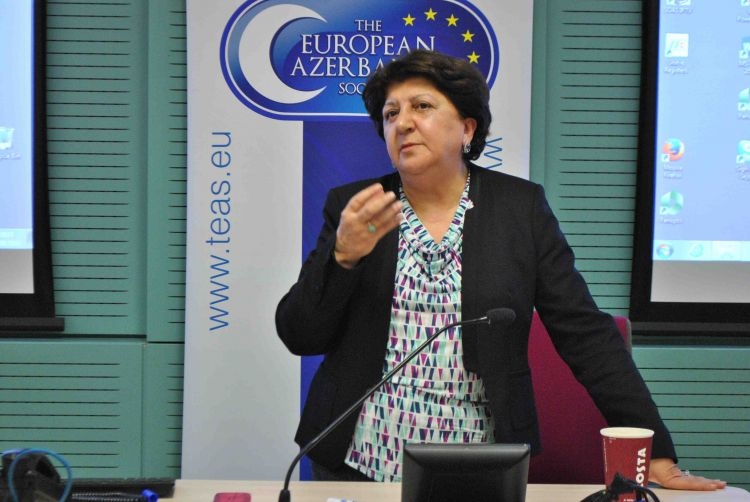 Musicologist of the Azerbaijan National Academy of Sciences, one of the leading experts on mugham Dr Sanubar Baghirova, in the world-renowned School of Oriental and African Studies (SOAS) – part of the University of London, delivered a talk entitled Mugham in Azerbaijan: New Trends and Classical Traditions, organised by the SOAS Music Department and Vostok Society, and sponsored by The European Azerbaijan Society (TEAS).

This was attended by 70 participants, including Dr Lucy Duran, a SOAS lecturer and frequent BBC Radio 3 broadcaster, and Simon Broughton, Editor-in-Chief of the leading world music periodical Songlines and world music columnist for the Evening Standard newspaper, TEAS told APA.

Musically illustrated by the legendary UK-based tar player Rafiq Rustamov, Honoured Worker of the Cultural Industry of the Azerbaijani Republic – born in Armenian-occupied Aghdam in Nagorno-Karabakh – whose career was kickstarted by winning a Gold Medal in the 1969 Soviet Music Festival and was formerly the Director of the Khan Shushinsky Music School and the Qarabag Bulbulleri (Nightingales of Karabakh Ensemble), Dr Baghirova swiftly delineated the development of the ‘classical traditions’ of mugham. Investigating the evolution of the modes of this ancient music, particularly during the 19th Century, which saw the conception of the Azerbaijani variant of the tar in Karabakh, she demonstrated how new developments by various mugham masters were rapidly assimilated into tradition. His performances of an excerpt from Bayati-Shiraz and three variants on Rast mugham demonstrated the dexterity and passion of a master at work.

Dr Baghirova also played some recent recordings and performances by innovators – both Azerbaijani and foreign – who are taking a new approach to mugham tradition, combining classical and jazz with mugham to remarkable effect. She explained: “Mugham themes i.e. melodies of free meter, are not normally composed by the mugham performers, as they are a form of canonical musical text. However, this does not mean that the performer cannot contribute its own details to this text. They must strike the right balance between the canonical and personal elements, and the balance where traditional elements are prevailing over personal and innovative ones.

“The compositions for kamancha and piano by Elnur Mikayilov and the duets between French jazz singer Pierre de Trégomain and Azerbaijani khanande Gochag Askarov demonstrate different approaches to mugham. The composers do not deliberately strive to maintain the correct balance, as their compositions are not classical mugham with a specific sequence order of melodic phrases that serve to develop the mugham mode.

“The composition by Elnur Mikayilov does not show any traditional melodic progression, or use a traditional type of music ensemble. It is purely beautiful music composed mainly on the base of mugham vocabulary and its modal ‘grammar’.

“An alternative approach to mugham is displayed in the compositions of Pierre and Gochag. Their music is a combination of mugham vocabulary and some melodic patterns taken in a free, not canonical order, with a western melodic vocabulary. In their two compositions – one is Let Me Be Voice in the mugham mode Bayati Kurd, another is Shelter, in the mode Bayati Shiraz. The two singers represent two musical realms and two semi-improvised musical languages – jazz and mugham – and they are juxtaposed. These two musical genres are not just placed mechanically side-by-side; they are related to each other by a certain modal, linguistic, and emotional affinity. The entire score happens to be polyphonic, comprising a few musical lines and even strata, but it does not show any eclectic touch. They sound homogeneous. And it sounds very spiritual, and this reflects the very spirit of the mugham.”

Video footage of the performances – recorded at the International Mugham Centre in Baku – stunned the audience into silence, with the mellifluous interplay between the tenor of Pierre and Gochag, seamlessly mixing styles, approaches and both English and Azerbaijani. Dr Baghirova commented: “This is very spiritual music and has a cathartic quality. This is the music of an inner world and does not destroy the origins of mugham.”

The speech ended with a lively and informed question-and-answer session, including questions about the origins of mugham, which Dr Baghirova considered to date back to the pre-Christian and pre-Islamic Zoroastrian period in Azerbaijan, and whether the Armenian–Azerbaijani conflict was having any impact on development of the music, to which Dr Baghirova replied: “There is no Azerbaijani music in Karabakh”, and Sabina Rackcheyeva, Violinist and Cultural Advisor, TEAS expanded: “Unfortunately, currently mugham is a music in exile. All the great mugham singers and performers – including Rafiq and Gochag – are from Karabakh.”