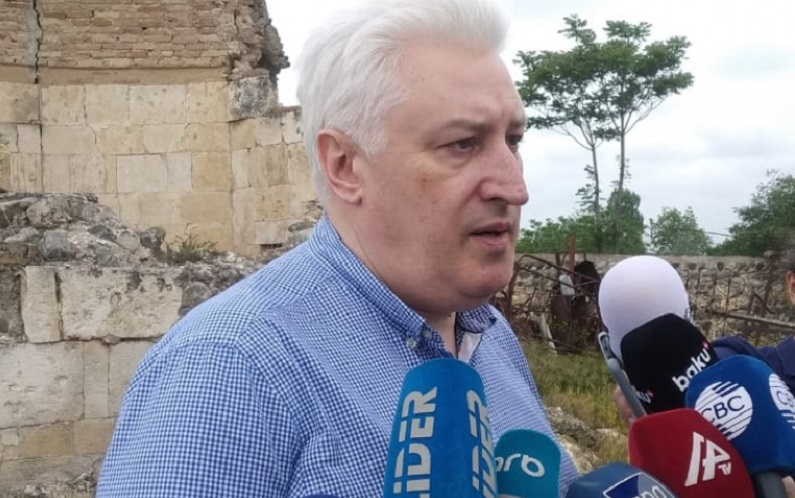 "From the military point of view, Operation "Iron Fist" is a 21st-century military operation based on high technology," the editor-in-chief of the Russian magazine "National Defense", military expert Igor Korotchenko told journalists during his visit to Aghdam today.

Korotchenko noted that the Azerbaijani Army fought against an enemy which was well prepared: "This enemy for almost 30 years has created several lines of defense. In Yerevan, they considered this line of defense as impassable for the Azerbaijani Armed Forces. But we have witnessed a new model, the war of the 21st century, which was conducted on the basis of new technologies. The Azerbaijani Army was able to achieve this remarkable victory in the 21st century. Operation "Iron Fist" is being studied at military academies around the world. This military operation is studied in the United States, Britain, France, Russia, and Arab countries. The "Iron Fist", in which Azerbaijan used modern weapons, has no analogue."

"In terms of the use of drones in real combat on this scale, neither the U.S. nor Israel can match Azerbaijan. No one, not even the Armenian propagandists can dispute that. There were 10 thousand deserters in the Armenian army during the 44-day war. This is an unprecedented case in modern military history. Azerbaijan won because of its will, its determination, its superior economy, its politics. It goes without saying that it was also a struggle between leaders. Against the background of the confused, hysterical, surrendered Nikol Pashinyan, there was a worthy President Ilham Aliyev, one of the modern world leaders. Azerbaijan is now regarded in many capitals of the world as a country that should be treated with trust, respect, and friendliness. Azerbaijan is a fully sovereign state, taking major political decisions. There are very few such countries today. Azerbaijan is one of those countries," the expert said.