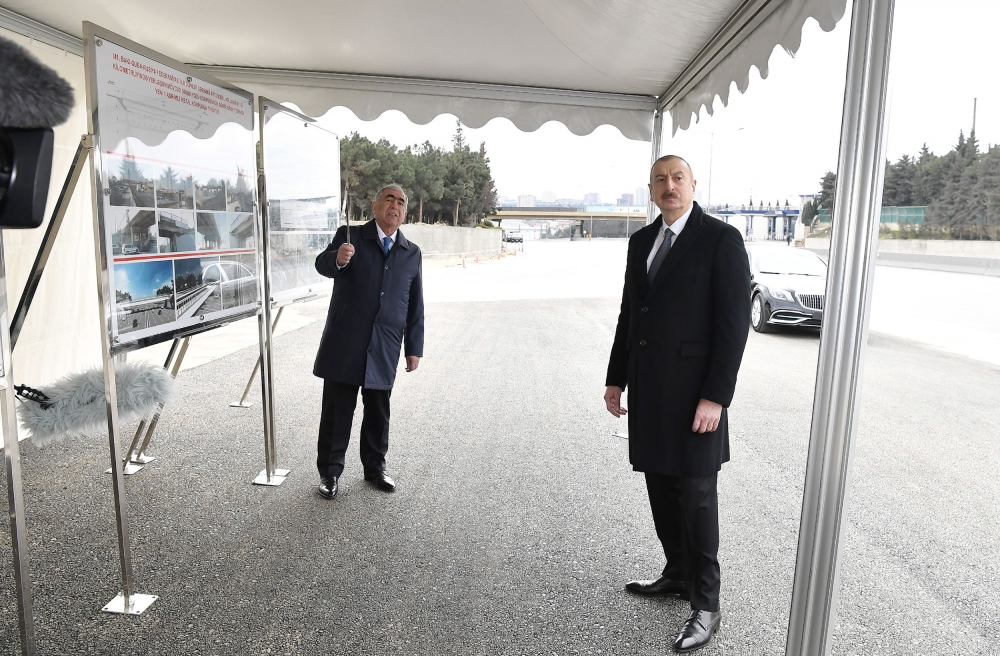 President of the Republic of Azerbaijan Ilham Aliyev has viewed the work done as part of the expansion of Baku-Sumgayit highway.

The head of state also attended the inauguration of the elevated pedestrian crossing at the intersection of Moscow Avenue and 20 January Street.

The head of state also attended the inauguration of an overhead pedestrian crossing at the intersection of Moscow Avenue and 20 January Street.

Informing President Ilham Aliyev about the work carried out as part of the expansion of the Baku-Sumgayit highway, Chairman of the Board of Azerbaijan Highway State Agency Saleh Mammadov said:

- Dear Mr. President, according to your executive order, we have been expanding the roads from the 7th kilometer of the Baku-Guba-Russian Federation state border highway to the 14th kilometer of this highway, a place called the Masazir Bridge, for five months now. Our main goal here has been to expand the existing four-lane highway starting from the exit of a tunnel called 20 January - “Shamakhinka”. In addition, on your instruction, we have begun the construction of a new tunnel at a place called the Khirdalan Roundabout. Thus, automobiles will move from the center only in the direction of Baku-Guba-Russian Federation. We plan to separate the direction of traffic from the 20 January Roundabout using road signs. In other words, automobiles will move towards Binagadi, Bilajari and then Masazir and Sumgayit on the right side. At the Khirdalan Roundabout section of the road, we have opened a new tunnel and a two-lane adjoining road with a length of 495 meters and a width of 7.5 meters. The width of the new tunnel is 9 meters. In addition, we have introduced another innovation – we restricted the entry of cars coming from Shamakhi, Khojasan and Lokbatan directly to

the 20 January Roundabout. At this site, we have already completed 80 percent of the work. We will probably finish the work by the end of May.

Dear Mr. President, this railway bridge was built in the 1960s and its supports interfered with the new tunnel. According to your instruction, the construction of a new bridge without medium supports is envisaged here. We will completely build this bridge, which will consist of metal structures. There will be no disruption to the railway traffic. We will bring and install the bridge as soon as it is ready.

President Ilham Aliyev: Will the road be expanded from there?

Dear Mr. President, this is a new pedestrian crossing built at a place called “Shamakhinka”. For the first time in Azerbaijan, the crossing has been built using a pylon method, i.e. without the middle support. The arch rests on cables.

President Ilham Aliyev: Dozens of bridges, road junctions, the construction of new roads, the expansion of existing ones, the standards observed during their construction. It is no coincidence that the Davos World Economic Forum gives the highest assessment to the quality of road infrastructure in Azerbaijan. We are in 30th place in the world in terms of the quality of our roads. But the population is growing and public activity is increasing. Even though economic activity has declined today, during the coronavirus period, it is, however, a temporary problem. At the end of the fight against this disease, economic activity will recover.

Considering the fact that the Baku-Sumgayit road is no longer able to cope with the existing traffic, which has become very busy, it was necessary to expand the road, of course. Baku and Sumgayit are somewhat connected now. Many people work in Baku but live in Sumgayit and vice versa. Therefore, we are implementing this project due to the strategic nature of this road – it is also a road leading to the north. Of course, technically this is not a straightforward project, because it involves numerous resettlements, construction of new bridges and relocation of some facilities. The implementation of this transport project is also provided for in the State Investment Program. Therefore, additional steps will be taken to build pedestrian crossings. A lot has been done in this direction in recent years, and this is of great importance for the safety of our people – modernization of the road infrastructure, reduction and elimination of traffic jams. Of course, “Azeravtoyol”, the Baku Transport Agency and other agencies dealing with transport issues should coordinate all of the work related to both the expansion and quality of the roads. At the same time, as a result of the application of regulatory rules on the roads, the creation of “green corridors” is also envisaged, and work in this direction is already under way. Therefore, it is necessary to continue this work. The road and all interchanges must be put into operation on time, i.e. within about two, maximum three months. This will bring people comfort and help avoid traffic jams on this road.

Saleh Mammadov: Mr. President, all this is being implemented according to your instructions. We, in turn, promise to complete all work within two months and thereby completely adjust comfortable movement in the direction of Sumgayit and Russia.

President Ilham Aliyev: Are you expanding this section of the Shamakhi road?

Saleh Mammadov: Yes, so that the cars traveling from here do not hamper each other.

President Ilham Aliyev: There have always been traffic jams here and the turn was narrow.

President Ilham Aliyev: Which side are you expanding it towards?

Saleh Mammadov: Towards the roundabout on the right.

Despite the recent sharp decline of the oil price in the world and the economic difficulties it has brought about, all the work envisaged in Azerbaijan in relation to socioeconomic development is being implemented under the leadership of President Ilham Aliyev successfully and in a timely manner. Clear evidence of that is the modernization of the road infrastructure as an important element of the social sphere and the widespread reconstruction of roads in the country. Large-scale work involving the reconstruction and expansion of roads at the modern level has also been done in Baku in recent years. All these measures are being taken in the interests of people’s comfort and safety. From this point of view, a major role is played by the project to expand the Baku-Sumgayit road being implemented on the instruction of President Ilham Aliyev. This project is very important for eliminating traffic jams and congestion, especially at rush hours, at the northern entrance to Baku. The implementation of the project will pave the way for a comfortable and safe entry and exit of vehicles.

The head of state then attended the inauguration of the overhead pedestrian crossing at the intersection of Moscow Avenue and 20 January Street.

On the instructions of President Ilham Aliyev and on the basis of relevant orders, comprehensive measures are currently being taken to ensure traffic safety on roads and provide citizens with comfortable and safe road crossings. In this regard, the construction of overhead and underground pedestrian crossings is of particular importance. In general, this work contributes to the modernization of the transport infrastructure in the capital. As part of the comprehensive measures taken in this direction, the overhead pedestrian crossing built at the intersection of Moscow Avenue and 20 January Street represents great importance as well. There is a high density of both vehicles and pedestrians in this territory. The construction of an overhead pedestrian crossing here will not only ensure the safety of pedestrians but also prevent possible traffic jams in the area, which will help intensify traffic. The construction of the 130 meters long and 3 meters widecrossing began in 2018.