President Ilham Aliyev: This Victory will forever remain in the history of Azerbaijan as a glorious Victory 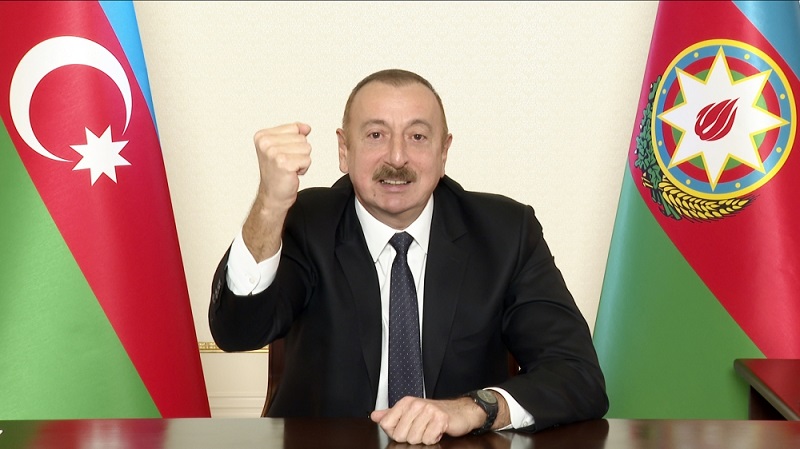 “Who were the leaders of Armenia? For 20 years, Armenia was led by bandits of the Kocharyan-Sargsyan junta and the Armenian people know only too well who led them in the last two and a half years. Their train is off. But it is still not too late. You can still catch this departing train if we give you permission and if our conditions are met. From now on, this will be the case, only this!” said President Ilham Aliyev as he addressed the nation.

The head of state said: “I wonder what conditions Pashinyan can put forward today and who he can put forward those seven conditions to. Where are those seven conditions? They are gone. Azerbaijan should hold talks with the so-called “Nagorno-Karabakh” – where is this condition? It has gone to hell! “Nagorno-Karabakh is Armenia and full stop” – he declared this in Khankandi with such enthusiasm, like a hero, and everyone applauded him. So? Is Karabakh Armenia? Let him come and say this. Karabakh is Azerbaijan! Those who applauded him, representatives of that criminal regime have either been destroyed or have deserted. They acknowledge that they have over 10,000 deserters. He said that they would build the parliament of the so-called “Nagorno-Karabakh” in Shusha, in our historical and ancient city, in our soul and heart. Where is this parliament? We have destroyed it, we have smashed it to smithereens. When he danced drunk on Jidir Duzu, he should have thought about how it might end.”

“We raised our flag in Shusha, in all other cities and districts,” the Azerbaijani President noted. “Everyone saw our strength. Everyone saw our power and our resolve. This iron fist broke their back, crushed them. It is a fist of unity, a fist of strength. After that, Azerbaijan will only follow the path of development and progress. We will continue to take tangible steps in the field of army building, we will further strengthen our army. All instructions have been given. We have both the resolve and experience – irreplaceable experience. All countries are studying the experience of this Patriotic War now. We also have the resources. There is a unity of people and the government. We have proven that we are a great and proud people. We have crushed the enemy. We have broken its back. We have destroyed it. This is a historic Victory. It will forever remain in the history of Azerbaijan as a glorious Victory!” the head of state added.