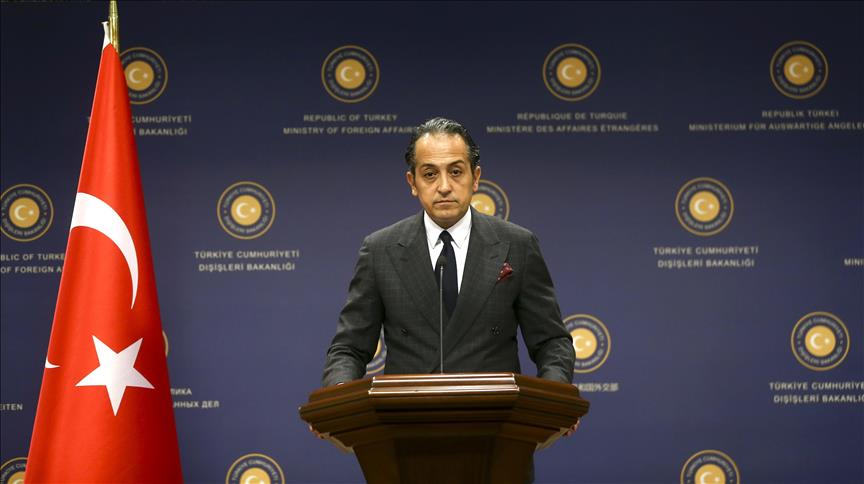 Turkey on Thursday warned Russia it may respond if there are further PKK/PYD attacks against it in the future, the Foreign Ministry said.

The warning came after a Turkish soldier in the southern province of Hatay was killed by PKK/PYD sniper fire on Wednesday, according to Anadolu Agency.

Speaking at a news conference in Ankara, Foreign Ministry spokesman Huseyin Muftuoglu said the Russian charge d’affaires had been invited to the ministry following the shooting to be told of Turkey’s alarm.

He said the envoy was told of the “kind of steps that should be taken in order to prevent similar cases in the future” and that “a reprisal” would be aimed at the PKK/PYD if such an attack was repeated.

The soldier was killed on Wednesday morning at the Reyhanli Bukulmez border post by gunfire from Syria, the Turkish General Staff said in a statement on Wednesday.

The army retaliated in self-defense under international law, the statement added, without specifying the form of retaliation.

The PKK/PYD is listed as a terrorist organization by Turkey due to its ties to the PKK, which has waged a terror campaign against Ankara since 1984.

However, the PKK/PYD is viewed by the U.S. as its ally against Daesh in Syria and Russian forces are stationed in Afrin, the northwestern Syrian district controlled by the PKK/PYD.

Muftuoglu said Turkey expects Russia to take steps to shut down PKK/PYD offices in the country.

He said Turkey and Russia are sharing views over "every type of terrorist organization" with links to the PKK/PYD and YPG.

"That is a known fact," he said. "We expect Russia to take steps to shut down the offices there."

Muftuoglu also voiced Turkey's concerns over photographs on social media showing Russian soldiers and PKK/PYD and YPG terrorists in Syrian city of Aleppo during a celebration to mark the spring festival of Newroz.

Muftuoglu said Turkey's" dismay over the issue have been "conveyed" to Russian charge d’affaires Sergei Panov.