US magazine: 'United in Faith for the Future of Karabakh' 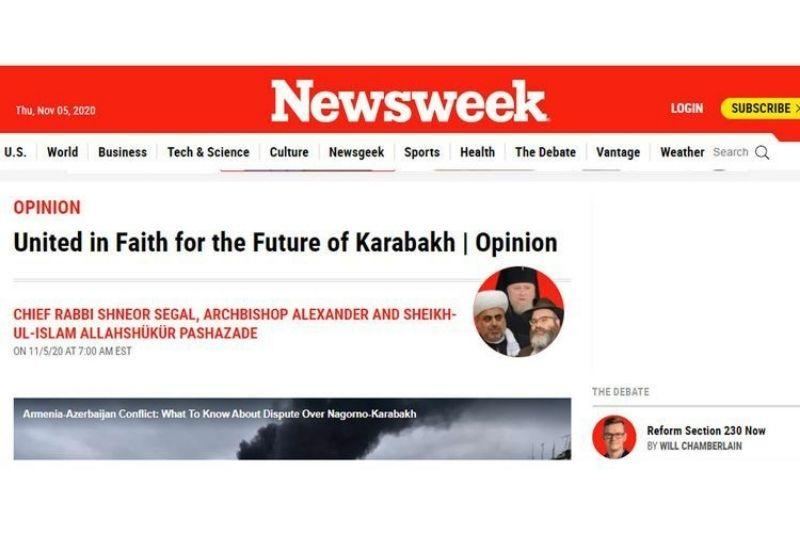 Newsweek published 'United in Faith for the Future of Karabakh' article concerning the religious aspect of the ongoing hostilities in the Nagorno-Karabakh conflict zone.

The article reflects response of Azerbaijan’s Chief Rabbi of Ashkenazi Jews Shneor Segal, Archbishop of Baku and Azerbaijani Eparchy of Russian Orthodox Church Alexander and Chairman of the Caucasian Moslems Office Allahshukur Pashazade to those who represent the Armenia-Azerbaijan hostilities as a religious war.

“When we, as religious leaders from Azerbaijan's Jewish, Christian Orthodox and Muslim communities, hear the international media say that our nation is involved in a ‘holy war" where ‘Christians are in peril,’ it is time for us to speak out,” the article said.

According to the article, the escalating conflict between Armenia and Azerbaijan is not religious in nature, no matter how much others wish it to be, nor is Azerbaijan playing the ‘Muslim invader’ part.

“Ours is a multi-ethnic nation with Ashkenazi Jewish community and Christians of the Catholic, Orthodox and Armenian traditions. Even Islam is not of one single branch, with both Sunni and Shia amongst our fellow citizens,” noted the article. “Armenia certainly is a Christian nation. During the 1988-94 conflict that led to the Armenian occupation of Azerbaijan's territory—more than 300,000 Azerbaijanis, mostly Muslims, were forced from Armenia as refugees.”

That war also saw 700,000 Azerbaijanis evicted from Nagorno-Karabakh and surrounding territories, which are internationally recognized territory of our country, also said the article.

“Azerbaijan does not play the role of invader. What Azerbaijan offers for settling the conflict is not the ejection of those who live in Nagorno-Karabakh today, but the return of those who were once themselves ejected,” the article pointed out. “Our country offers the chance for autonomy within the legal borders of Azerbaijan for those who wish to live there, in peace, with different religions.”

The article reminded that last week Archbishop Sahak - one of the four Patriarchs of the Armenian Apostolic Church - affirmed that the tragic events in the Caucasus are not an inter-religious conflict.

“It’s dangerous to play politics with religion and to attempt to pit religions against each other. We ask the politicians to stop such actions and reconsider. They know not what they do. There are countries rich and poor, which are Christian, Muslim, and others of many faiths. But we must remember, we are all equal in the eyes of the Lord,” summed up the article.