Vusal Gasimli: Karabakh will be a new driver of economic growth in Azerbaijan 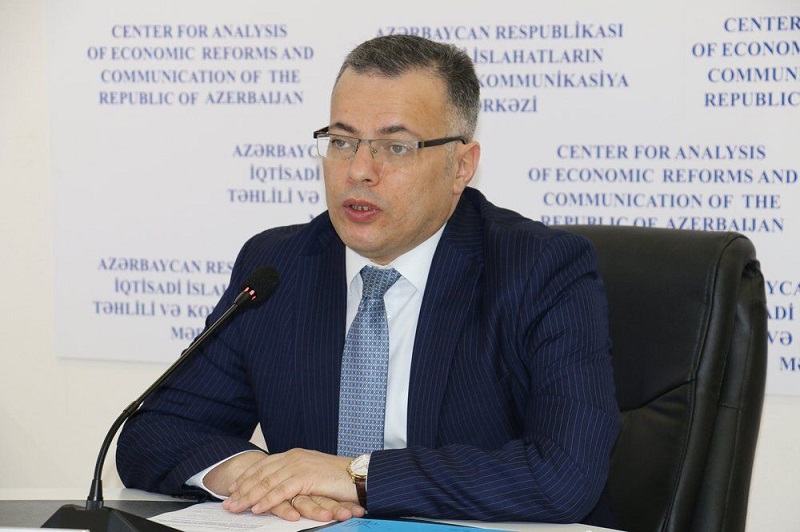 Under the leadership of the President of the Republic of Azerbaijan, Commander-in-Chief Ilham Aliyev, the glorious Armed Forces of the Republic of Azerbaijan won the Patriotic War, which lasted from September to November 2020, and put an end to the occupation. Executive Director of the Center for Analysis of Economic Reforms and Communication, Doctor of Economics Vusal Gasimli responded to questions about the main directions of post-conflict reconstruction.

-How can the conceptual framework of post-conflict reconstruction be assessed?

-In fact, President Ilham Aliyev has already defined the framework for post-conflict reconstruction. Post-conflict development of Azerbaijan’s territories liberated from occupation, including institutional solutions, construction and humanitarian activities with the involvement of international development partners and investors, cooperation between the state and the private sector, the return of internally displaced persons and the development of social capital can be implemented by the implementation of special government programs.

Post-conflict reconstruction will be carried out within the framework of the overall development strategy of the Republic of Azerbaijan through the re-integration of territories liberated from occupation and joining the value chain. In accordance with the UN Sustainable Development Goals and the principles of the 4th industrial revolution, post-conflict areas will develop taking into account local characteristics, resources and prospects. With the involvement of international experts, the damage caused by Armenia to Azerbaijan, including damage to land, waters, forests, minerals, property and cultural resources and, most importantly, civilians, is calculated, and claims are filed against the opposite party in this regard.

The Karabakh development strategy can cover short-term, medium-term and long-term activities at the local, regional, national and international levels. For the implementation of the strategy, it is very important to organize management and use macroeconomic, fiscal, monetary, social, and other government policy instruments. At the same time, to regulate the real exchange rate of the national currency, it may be necessary to take into account the stages of the money stock absorption by the economy.

Post-conflict reconstruction will contribute to economic growth in Azerbaijan. Azerbaijan will continue to constantly strengthen its economic, political and military superiority in the region.

-What can you say about post-conflict reconstruction strategies applied in international practice?

The main goal of post-conflict reconstruction strategies is to achieve sustainable economic growth and human development. A study of the economic recovery of many post-conflict countries, including Iraq, Afghanistan, Kosovo and Croatia, shows that post-conflict countries face greater challenges than stably low developed countries. Among those problems are economic downturn, high inflation, chronic fiscal deficits, high government debt, damaged physical, human and social capital, destroyed economic incentives, widespread poverty and massive unemployment. The "safety cushion", clear vision and political will of Azerbaijan will allow us to avoid these problems.

In world practice, we can see that countries mobilize and re-prioritize budgetary resources in the post-conflict period. Under these conditions, the use of such model in Azerbaijan will be more expedient. A new economic policy strategy, adopted in Malaysia in 1971, was aimed at ensuring national unity in two ways: reducing poverty and eliminating economic imbalances by accelerating the restructurization of society.

According to the world practice, first, it is necessary to assess the internal human capital, which includes the population of the former conflict zone. These economic actors should not passively wait for funding from foreign agents. On the contrary, by showing determination, diligence and innovation, they can create added value themselves. Development strategies will be more sustainable if they are based on social dynamics and a full understanding of institutional processes. According to the United Nations Development Program, local economic actors should play a key role in the recovery plan.

In the practice of post-conflict countries, a new strategy of economic development must meet the following requirements to ensure macroeconomic stability: gradual and consistent implementation of economic reforms; choosing private investment as a top priority; rebuilding monetary and fiscal policies that ensure economic recovery; setting financing of recovery and increasing employment as the main goal of fiscal policy, along with ensuring equal fiscal sustainability; restoration of all social services for individuals and households; ensuring transparency and efficiency in the management of international aid and grants; correct organization of the donor coordination center; the formation of an institution ensuring the implementation of the strategy.

After the World War II, economic recovery in France and Italy was based on the Marshall Plan. Like other post-conflict aid programs, Marshall Plan focused on imported goods and services. At the same time, the use of aid was conditioned by the approval of the US budget and expenditures. With sharp deviations from the conditions and expectations of this program, Italy and France, by increasing funding for the country's priority areas, implemented a successful post-conflict reconstruction policy.

At all these stages, it is important to pursue the experience of international structures that play a significant role in building a post-conflict reconstruction model. A high-quality institutional climate, available funding sources, and the phased implementation of reforms are essential for the implementation of an effective post-conflict model.

-What can be the main directions of the Karabakh development strategy?

Following the new framework for strategic management of economic policy, created in Azerbaijan upon the order of the President, the Karabakh region will constantly develop and reintegrate into the life of the country. The development strategy of Karabakh can be carried out by consistent implementation in terms of time and regions and according to the priorities below. To ensure the implementation of the development strategy of Karabakh, a management, monitoring and evaluation mechanism, as well as a transparent and accountable financing mechanism, can be created. In the liberated territories, activities will cover the decontamination, as well as construction and improvement in compliance with the new main plans for cities, settlements and villages. It is necessary to create, restore and develop economic infrastructure of the territory, including roads, land reclamation and irrigation systems, electricity, gas, water supply, sewerage, etc. At the same time, it is important to develop social infrastructure, including education and health care. Priority should be given to ensuring the full functioning of state and municipal authorities in the liberated territories, the development of competitive sectors of the economy and employment, including self-employment. The priorities should also include the following: gradual return of internally displaced persons to their places of residence taking into account economic and social issues; the development of human capital; attraction of external and local investments along with state investments; supporting the development of entrepreneurship, especially micro, small and medium-sized businesses, as well as the development of economy following the principles of innovative solutions, new technologies, green and circular economy.

-What financial sources will be used during post-conflict reconstruction?

There are various sources of financing to be used in the region, including the state budget, SOFAZ, aid, grants, and donations of foreign credit organizations, private investments and other sources not prohibited by law. We can already feel the interest of representatives of international organizations, foreign countries, large and medium-sized businesses in participating in post-conflict reconstruction. Each international organization, following its mandate, and each business in accordance with its profile, is ready to invest in the liberated territories. Following the example of Israel, widespread use of the diaspora investment model is possible in Azerbaijan. In the post-conflict period, venture capital investment, crowdfunding and crowdinvesting can attract interest in technology sector in the liberated territories. Considering that it is difficult to make large investments at the initial level, attracting investments at the level of small and medium-sized businesses will contribute to large investments in the future. That is why Taiwan and Japan have demonstrated themselves as venture capital investors in technology. Through public-private cooperation, investments can be attracted in many areas. Implementation of infrastructure projects through public-private cooperation leads to a revival of the private sector, increases efficiency, and reduces pressure on the state budget.

The territories liberated from the occupation have potential to develop the mining industry, metallurgy, food industry, processing industry, tourism and recreation, creative industry, pharmaceuticals, grain and vegetable growing, viticulture, cotton and fruit growing, animal husbandry, poultry farming, beekeeping, and production of building materials. Investment in these areas is important both for the growth of non-oil exports and import substitution and for joining value chains. Post-conflict reconstruction will play an important role in terms of economic security, including food security. Various mechanisms can be used to encourage investment in these areas, including industrial parks and districts, agro and techno parks. Karabakh has resources, strategic assets, efficiency and markets that can attract investor interest. The region's opportunity to enter the Iranian market with the population estimated to 80 million and Turkish market covering 83 million people (through Nakhchivan) is attractive for export-oriented investments.

In general, Karabakh will be a geographical driver in Azerbaijan, the growth center. Investments in this region and reconstruction activities will accelerate the GDP growth in Azerbaijan.