Week of 'Justice for Khojaly' held in Istanbul - PHOTOS 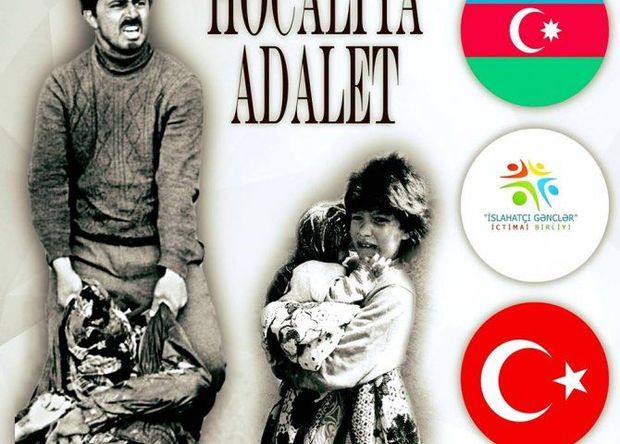 The week 'Justice for Khojaly' has been held in Turkey's Istanbul city by the 'Reformer Youth' Public Union.

According to public union chairman Farid Shahbazli, for already five years the public union has been holding the commemorative events in Istanbul by joining the international campaign 'Justice for Khojaly' of the vice president of Heydar Aliyev Foundation Leyla Aliyeva. The main goal of holding the week of Justice for Khojaly is to draw the attention of fraternal country to the realities of Khojaly genocide and Nagorno-Karabakh conflict. Shahbazli noted that the commemorative programs were arranged in Marmara, Yeni Yuzyil and Istanbul Culture Universities as part of the week.

In the week of Justice for Khojaly held in Istanbul, Azerbaijan was represented by a large delegation. MPs Elshan Musayev, Eldeniz Salimov, honored artist Aybeniz Hashimova, NGO leaders Fahraddin Hasanzade, Ahmad Sharifov spoke at the conferences arranged at the universities and informed those present about the bitter consequences of the Khojaly genocide and atrocities committed bt Armenians.

During the week the Turkish side was represented by vice president of the Marmara University Recep Bozlaghan, Yeni Yuzyil University rector Yashar Hajisalioglu, Culture University vice president Ahmet Jihan, chief of the foreign news department of NTV channel Ahmet Yesiltepe, advisor of the Reformer Youth Public Union chairman Hakki Sener and others who shared the grief of the Azerbaijani people and said they will spare no effort to attain the legal and political assessment of the Khojaly genocide on the international level.

Musical compositions in the patriotic spirit were performed by honored artist Aybeniz Hashimova and Bulbuller group during the events organized as part of the week.

The events as part of the week were highlighted by Turkey's TRT Haber and NTV channels.

It has to be noted that the week was organized with the support of Turkish Airlines, Azer-Turk Bank, STI Travel Azerbaijan.