Agridag Mountain to be illuminated in colors of Azerbaijani, Turkish flags 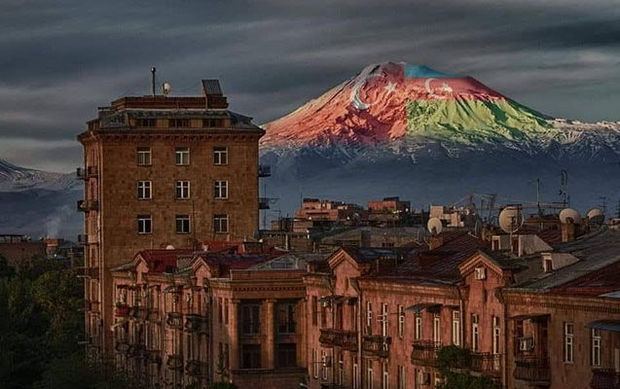 All Armenians living in houses overlooking the Agridag mountain will see reflect the colors of the Azerbaijani and Turkish flags on November 10, the commemoration day of the Turkish Republic’s founder Mustafa Kemal Ataturk, Mayor of the Agri Province Municipality Savci Sayan told Trend.

According to Sayan, the implementation of this project was supported by businessmen from the province and the GemiKaya Holding company operating in Azerbaijan’s Nakhchivan.

"This is a very big project, and is almost ready. Foreign experts have also been invited to participate in it," he said.

Speaking about the origin of the project’s idea, the mayor noted that the idea appeared as expression of the desire to support the Azerbaijani brothers who are fighting in Armenian-occupied Karabakh.

He reminded that Armenia used to claim Turkish territories, too.

"My grandfathers also fought with Armenian gangs, and we’re well aware of Armenians’ essence," he said.

The mayor stressed that the entire Turkish people fully supports the Azerbaijani brothers.

"From all of Turkey, from the province of Agri and personally on my behalf, I convey greetings to the brotherly Azerbaijani people. We are always next to our brothers, because they are on the right path," noted Sayan.

“Turkey couldn’t remain silent in the face of the long-lasting occupation of Karabakh and surrounding districts of Azerbaijan. For us, Karabakh is everything, as for Azerbaijan. Azerbaijan is our soul, because we are one nation and two states. It has always been and will be like this," the mayor emphasized.

“Turkey is proud of the Azerbaijani army’s victories. We celebrate every victory of Azerbaijan. I’m convinced that Azerbaijan will soon liberate its lands, because it is fighting a fair struggle, and the whole world knows about it," he added.