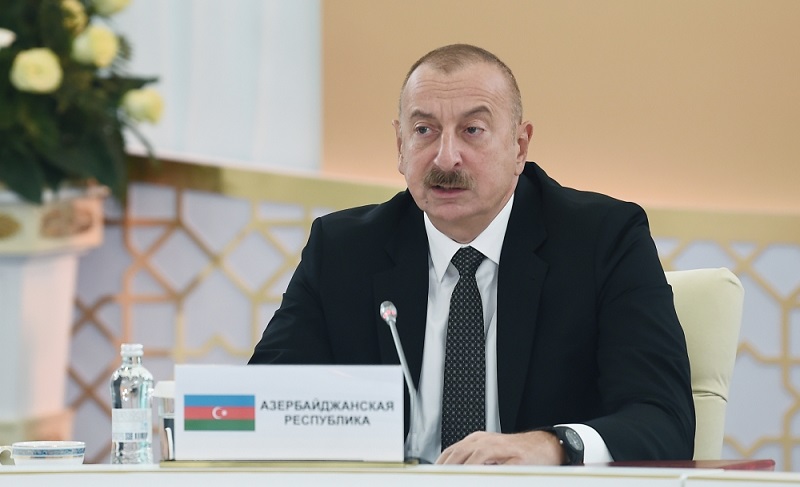 “The French foreign minister has made false anti-Azerbaijan statements. During the Second Karabakh War, the French Senate and the lower house of their parliament adopted resolutions recognizing the so-called Nagorno-Karabakh although it wasn’t recognized even by Armenia. We are aware that another anti-Azerbaijan resolution is being prepared in the French Senate in mid-November,” said Azerbaijan’s President Ilham Aliyev as he addressed the meeting of the CIS Heads of State Council in Astana on Friday, News.Az reports.

“Therefore, unfortunately, the current French leadership, unlike the previous ones – I had the opportunity to communicate quite closely with President Chirac, President Sarkozy and President Hollande, and our relations were quite balanced, quite friendly, and we always perceived the activities of previous French presidents, despite, of course, a certain factor of the Armenian diaspora in France, as balanced. However, the current French leadership has effectively crossed out all this. Therefore, I wanted to inform colleagues about this situation,” the president noted.

“Further, the Embassy of Azerbaijan has been attacked twice in Paris. Moreover, after the first attack, the President of France, in a telephone conversation, promised to me that measures would be taken to prevent this from happening again. This turned out to be untrue, to put it mildly. The security guards that were installed in front of the Embassy of Azerbaijan after the first act of vandalism and an attempt to break into the Embassy building were removed. Most likely, this was agreed with the Armenian side. As soon as the security was removed, there was a second attempt to break through, there were insulting posters, crowds of raging radicals attacking the Embassy of Azerbaijan. This is categorically unacceptable and it is a violation of all diplomatic conventions,” the head of state added.