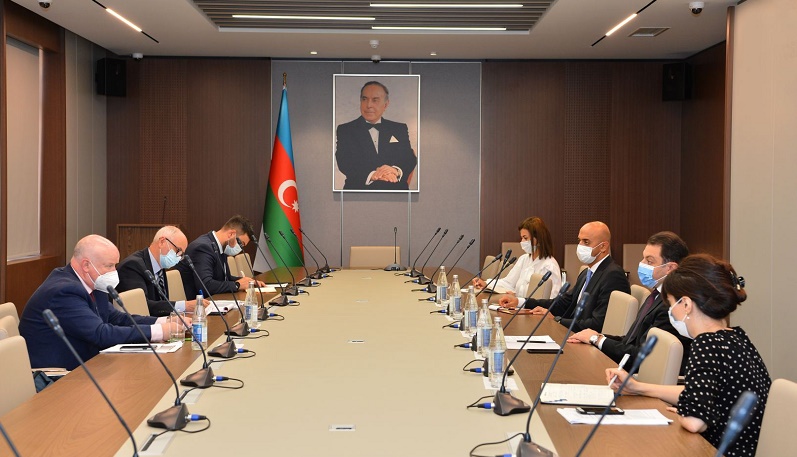 A meeting with a member of the PACE committee Paul Gavan was held at the Azerbaijani Foreign Ministry, the ministry said.

Azerbaijani Deputy Foreign Minister Elnur Mammadov met with a member of the PACE Committee on Migration, Refugees and Internally Displaced Persons, who is on a visit to Azerbaijan on July 26, rapporteur on the report to be prepared on the topic "Humanitarian results of the conflict between Armenia and Azerbaijan" Paul Gavan.

The views on the main topic of the future report, the prospects for the political solution to the upcoming issues, the involvement of the international community in the processes, as well as in connection with the fact that the territories of Azerbaijan were liberated from the Armenian occupation are among the most "contaminated" by mines in the world were exchanged during the meeting.

The issue of returning internally displaced people to their lands was also discussed.

PACE rapporteur Paul Gavan stressed that during the visit he will try to obtain as much detailed information as possible and prepare a comprehensive report.

Mammadov stressed that in the final report of PACE rapporteur Paul Gavan, who is also a member of the Irish Senate, attention must be paid to the grave consequences of the conflict, the fact that up to 4,000 Azerbaijanis went missing during the first Karabakh war; over the past period, Azerbaijanis have been subjected to ethnic cleansing both on the territory of Armenia and in the occupied territories of Azerbaijan, as a result of which up to a million Azerbaijanis became refugees and internally displaced people.

The interlocutor was informed about two main problems in connection with the return of internally displaced people to their lands. During the occupation, the Armenians destroyed the entire infrastructure on the Azerbaijani lands.

Moreover, both during the occupation and after the 44-day Karabakh war, while leaving the Azerbaijani territories, the Armenians planted many mines there.

Therefore, it takes some time for the safe return of internally displaced people to their lands.

The Azerbaijani deputy minister stressed that by putting pressure on Armenia in the issue of giving all maps of minefields, the international community may render assistance in this issue.