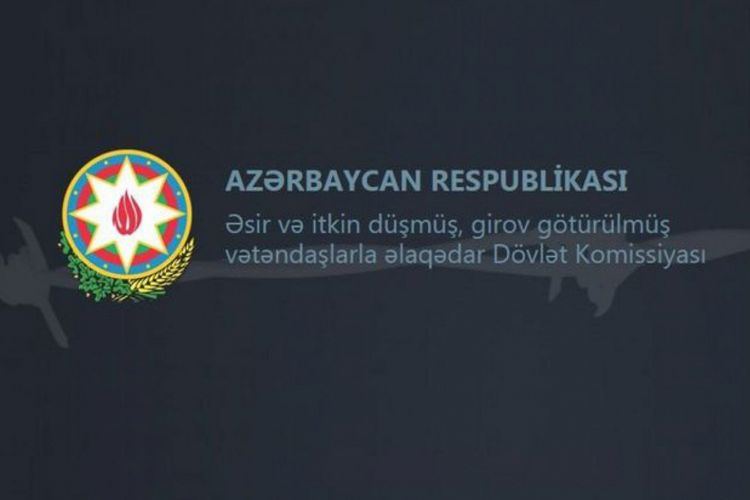 Azerbaijani non-governmental organizations (NGOs) made a statement in connection with the captives, hostages and persons missing as a result of military aggression and occupation of Azerbaijani territories by the Armenian armed forces [until their liberation in the 2020 second Karabakh war], the Agency for State Support of NGOs told News.Az.

"Beginning from the late 1980s, Armenia, grossly violating international law, had been occupying the ancient historical lands of Azerbaijan - Karabakh and seven surrounding districts, which lead to the large-scale humanitarian catastrophe. As a result, about one million peaceful Azerbaijanis becoming victims of Armenian policy of occupation and ethnic cleansing were expelled from their lands by force of weapon,” the statement said.

“Mass killings of the peaceful population were committed, including old people, women and children. People were taken hostage, subjected to unbearable tortures and blackmail, became objects of human trafficking, settlements, historical and religious monuments, cemeteries were destroyed. Moreover, Armenia, not refusing from its aggressive actions and making a claim for ‘new war for new territories’, continued its policy of occupation and ethnic cleansing by launching artillery and missile attacks on Azerbaijani cities and villages [during the second Karabakh war],” the statement noted.

According to the statement, after the end of the second Karabakh war, in line with the trilateral statement of November 10, 2020 [between presidents of Azerbaijan, Russia and Armenia’s prime minister], Azerbaijan took all the necessary measures to restore peace and stability in the region. The measures included return of persons who were captured during the war [by Azerbaijani Armed Forces] to Armenia, assistance in search and return of dead bodies. This process still continues.

"However, Armenia continues to violate the requirements of international law. Despite numerous appeals from Azerbaijan, Armenia still refuses to provide information about the fate of nearly 4,000 Azerbaijanis taken hostage and captured by the Armenian armed forces during the first Karabakh war [in the 1990s]. Indisputable facts and the materials show that most of these people were killed or died from tortures and diseases,” the statement further said.

“The Armenian side tries to hide its crimes against peace and humanity, war crimes, and refuses to cooperate within the framework of humanitarian organizations. It should be reminded that in accordance with international humanitarian law the parties to a conflict are obliged to cooperate on the issue of not only exchange of bodies, but also on their search and identification.”

“One of the most serious violations of international humanitarian law is the enforced disappearance of both civilians and military conscripts during an armed conflict. This issue is reflected in the International Convention for the Protection of All Persons from Violent Disabilities adopted by the UN General Assembly in 2006,” the statement also noted. “The resolution of the UN General Assembly of November 6, 1974, recommended that the parties to the conflict provide mutual information about the missing. In 2002, the UN Commission on the Rights of Man also declared in its resolution that the other side of the armed conflict should participate in the search for missing persons."

"Currently, the number of Azerbaijanis registered as missing on the basis of supporting documents is 3,890, of whom 3,171 are military servicemen, and 719 – civilians, while out of civilians 71 people are minors (20 young girls), and 267 women (154 old people). Thus, the Armenian side grossly violated Article 34 of the IV Geneva Convention on the Protection of Civilian Persons in Time of War, which prohibits the capture of hostages,” the statement said. “The persons had been remaining in the territories of their residence during the occupation of cities and villages [by Armenia]. Based on the testimony of persons released from Armenian captivity, military personnel who took part in the hostilities, as well as civilians who witnessed the above facts, a list of these persons was compiled and transferred to the opposite side.”

“Despite the existing proof, Armenia denies the fact that the people were taken hostage. Information about 54 Azerbaijanis, mentioned in the letters, addressed by the International Committee of the Red Cross (ICRC) to the State Commission of Azerbaijan on Prisoners of War, Hostages and Missing Persons in 1998 and 2001 is one of the most serious and undisputable facts in this context,” said the statement. “According to those materials, the ICRC representatives visited the 54 citizens of Azerbaijan, taken hostage and captured by Armenian servicemen, in the places of the citizens’ detention in Armenia and in the previously occupied territory of Azerbaijan, and the persons were officially registered by the ICRC. These 54 people were killed in the Armenian captivity. The remains of 17 people out of the 54 persons were returned, the remains of the 33 people weren’t returned although it was reported that they died in the places of detention, and no information about the further fate of four people was provided.”

According to the authors of the statement, the Action Plan, adopted by the ICRC in 2000-2003, also stated that the other side of the armed conflict must provide information about the missing persons to their families. The failure to provide such information to members of the family is a gross violation of the principle of respect for family life, fixed in international law in the field of human rights and international humanitarian law. This also applies to information about persons who died.

"The IV Geneva Convention of 1949 states that one of the parties to a conflict must respond to requests from individual members to search for members of their families. This convention directly recognizes the right of family members to receive information about the fate of their loved ones. This right is also reflected in the recommendations of the Parliamentary Assembly of the Council of Europe (868; 1056, etc.),” the authors reminded. “Numerous testimonies, brutal treatment of Azerbaijani prisoners of war and hostages and the physical damage inflicted on them by the Armenian military servicemen, as well as the imprisonment conditions confirm the gross violation of the international humanitarian law by Armenia. Azerbaijani captives and hostages were heavily tortured to obtain various data. Medical and other experiments were conducted on the persons, attempts were made to carry out terrorist acts against Azerbaijan by attracting them to the cooperation with Armenian special services through threats and blackmail.”

“All the mentioned facts show that the Armenian side has violated international law and principles, strictly prohibiting tortures and inhumane treatment, including the violation of the Geneva Conventions, to which Armenia acceded and continues to commit crimes against humanity. At the same time, the fact was revealed that the Azerbaijani captives and hostages were deliberately killed and buried in a mass order during occupation of the territories by the armed forces of Armenia,” the NGOs’ statement further said. “Article 120 III of the Geneva Convention and Article 130 IV of the Geneva Convention require a decent burial of persons who have died in captivity, and, if possible, in accordance with their religious rites and in separate graves. The existing mine threat on Azerbaijan’s liberated territories doesn’t allow to search these mass burials. The Armenian side not only refuses to provide accurate and complete maps of the minefields, but also doesn’t provide information on the places of mass burials of murdered Azerbaijani captives and hostages.”

The statement noted that as a country that had been suffering many years from the conflict, Azerbaijan pays special attention to the observance of international humanitarian law and supports international efforts in this area.

“Unfortunately, double standards and indifference in relation to the crimes against humanity committed by Armenia create background for the continuation of its policies of undermining measures on the establishment of a stable peace and stability in the region. We believe that it’s unacceptable to allow the politicization of the problems of captives and missing people,” the statement authors said.

“The issue should be treated with a purely humanitarian point of view, and and end must be put to the indefiniteness and suffering of hundreds of families. We again call on international organizations and states to put pressure on Armenia for receiving information about the fate of about 4,000 Azerbaijanis who are missing as a result of the aggression of the armed forces of Armenia, and the return of captives and hostages, as well as the remains of the persons who died as a result of tortures and diseases, and for the investigation of military crimes committed by this country," said the statement.