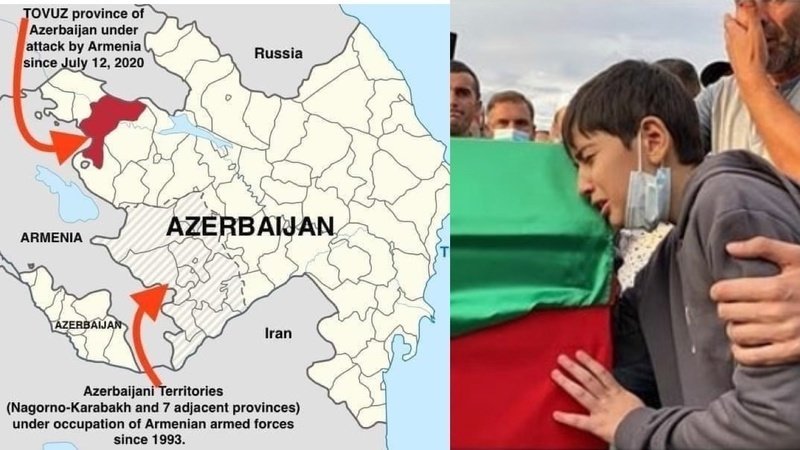 A group of Azerbaijani youth has launched a petition on military provocation committed by Armenian armed forces on Armenia-Azerbaijan border on July 12.

"After almost 30 years of Armenia occupying land internationally accepted as Azerbaijan, ethnically cleansing its people, displacing over 1 million Azerbaijanis from their own land and violating international law, they again attacked the Azerbaijani border, this time in Tovuz.

On July 12, 2020, in an attempt to seize strategic positions in Azerbaijan, the Armenian military violated ceasefire agreements by attacking the Armenia-Azerbaijan border in Tovuz. As of now, 11 Azerbaijani soldiers and 4 Azerbaijani civilians have been killed. Armenia is currently continuing to attack both the military and civilian structures in Tovuz, Azerbaijan.

For clarification, this is a completely different region of Azerbaijan, separate from Nagorno-Karabakh, which has been illegally occupied by Armenia since 1993.

Tovuz is a province in Northwestern Azerbaijan and is populated by ethnically Azerbaijani people. Prior to the attack, this region has never had any clashes with Armenia, proving that Armenia’s attack of this region is solely for the purpose of land expansion.

Armenia’s Minister of Defense, Davit Tonoyan, threatened Azerbaijan with the invasion of “new advantageous positions” and mentioned that Armenia would invade “new territories in the event of a new war” with Azerbaijan.

Since the collapse of the Soviet Union, Azerbaijani civilians have been experiencing endless ethnic cleansing and illegal occupation of their land by the Armenian military. Most notable is the Khojaly massacre, where 613 Azerbaijani civilians were all killed in one night. Since then, there have been over 1 million Azerbaijani IDPs and refugees waiting to go home to Nagorno-Karabakh, making Azerbaijan a country with one of the largest forcibly displaced people in the world.

To this day, 20% of Azerbaijani land is still illegally occupied by Armenia despite the UNSC, UN General Assembly, Council of Europe, European Parliament, NATO, OIC, NAM and many other international organizations demanding the complete and immediate withdrawal of Armenian forces from the occupied regions.

Azerbaijanis, both in Azerbaijan and across the world, are tired of seeing their civilians being killed, tired of Armenia’s violation of international borders, tired of more and more Azerbaijani land being illegally occupied and tired of the international silence.

Sign this petition if you want Armenia to stop invading Azerbaijan’s land and to stop killing Azerbaijani people!"

The petition can be signed at:  https://www.change.org/p/donald-j-trump-stop-armenia-from-invading-azerbaijan-s-land-and-killing-azerbaijani-people?recruiter=688213124&utm_source=share_petition&utm_campaign=psf_combo_share_initial&utm_medium=whatsapp&recruited_by_id=d2d07300-fdd0-11e6-9915-05e5e542ff16

Another  petition calling for the immediate withdrawal of Armenian troops from Nagorno-Karabakh and ensuring the territorial integrity of Azerbaijan has been launched in the section "We the People" of the official website of the White House.