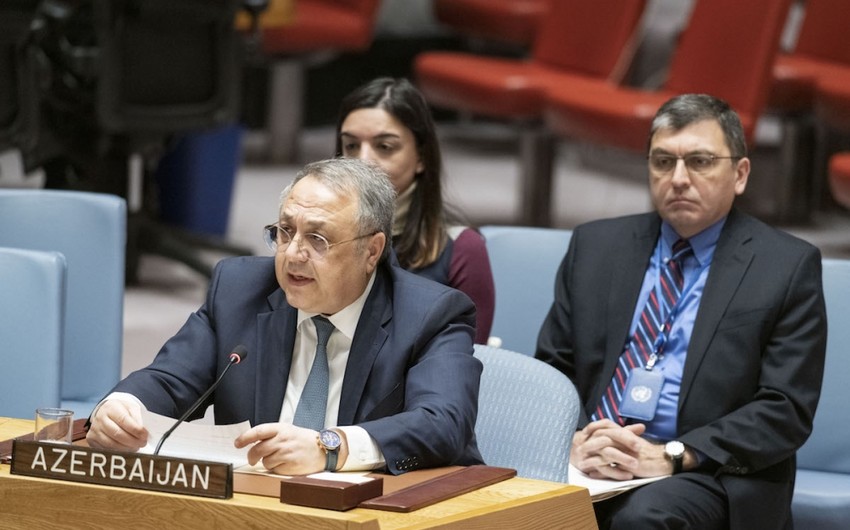 "We categorically reject Armenian representatives' accusations. "These accusations, which consist entirely of fabrications, distortions, and deceptions, demonstrate how far Armenia is from fulfilling its international obligations and promoting peace, stability, and cooperation in our region," Y. Aliyev said.

The ambassador emphasized that the accusations made during the speech of the Permanent Representative of Armenia to the UN are baseless and slanderous: "These statements, full of standard fabrications, distortions and deceptions, demonstrate how far Armenia is from fulfilling its international obligations and promoting peace, stability and cooperation in our region."

"The fact that Armenia still does not fulfill its international obligations and is not sincerely committed to peace and stability in the region is proven by its continuous use of outdated or fictitious place names in Azerbaijan. References to such names, which have no historical and legal basis in the statement of the representative of Armenia, are evidence of his government's ongoing territorial claims against Azerbaijan and blatant disregard for the sovereignty and territorial integrity of my country," he said.

Moreover, the ambassador said that the claims that Azerbaijan is targeting civilian objects in Armenia are false and emphasized that it was Armenia that fired large-caliber weapons at civilian buildings in the cities of Ganja and Barda of Azerbaijan in 2020.

Y. Aliyev added that the state of Azerbaijan, which has always shown humanism towards Armenia, brought several Armenian military personnel to the other side, which it tried under criminal responsibility.