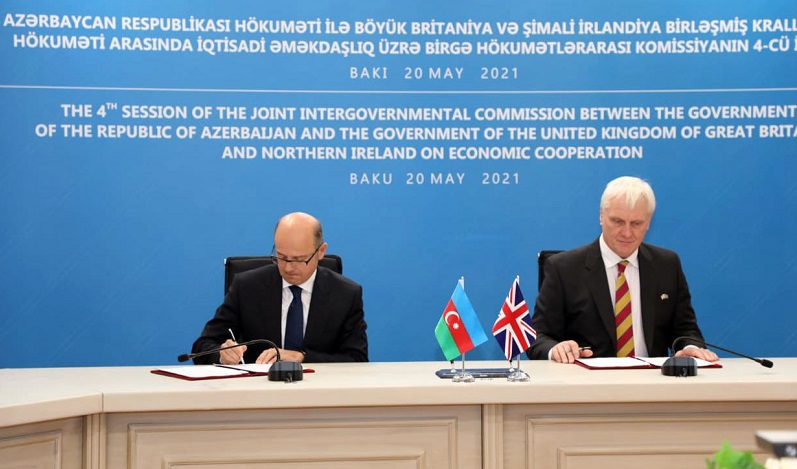 The representatives of the relevant structures of the two countries took part in the online meeting, co-chaired by Azerbaijani Energy Minister Parviz Shahbazov and Parliamentary Under Secretary of State, Minister for Exports Graham Stuart.

The work conducted after the 3rd meeting of the Intergovernmental Commission were considered, the possibilities of expanding cooperation and ties between Azerbaijan and the UK in the field of energy, renewable energy and energy efficiency, agriculture, transport, communications, environment, education, health care, tourism, culture and other spheres were discussed during the meeting.

The successful development of trade and economic cooperation, as well as political cooperation between the two countries was stressed. Mutual visits at the highest level were mentioned. The signed documents and ongoing projects played an important role in the development of multifaceted economic relations.

In this regard, the importance of the visit of President of the Republic of Azerbaijan Ilham Aliyev to the UK in April 2018, as well as high-ranking officials of the UK’s government to Azerbaijan was emphasized. The trade turnover between the two countries increased by 34 percent and reached $704.6 million in 2019.

Last year, this figure, due to the negative consequences of the COVID-19 pandemic, decreased by 35 percent, but this year it is growing. In particular, the trade turnover increased by 2.5 times in the first quarter of this year compared to the same period of last year and amounted to $162.2 million.

The successful cooperation between Azerbaijan and the UK during 30 years in the oil and gas sector has entered a new stage of development, responding to the challenges of the global energy sector, Azerbaijani Energy Minister, Co-Chair of the Intergovernmental Commission Parviz Shahbazov said.

“In general, $28.8 billion out of $30.6 billion invested by the UK in the Azerbaijani economy accounted for the energy sector,” the minister said.

"The implementation of the national priority "Clean environment and a "green growth" country in the next decade, approved upon the relevant order of the Azerbaijani president, a strategic decision to promote the development of renewable energy sources and "green" technologies, the implementation of the set tasks open new opportunities for diversifying cooperation between our countries in the energy sector," Shahbazov said.

"Our cooperation in the field of decarbonizing integrated energy and transport systems, renewable energy sources, energy efficiency, the transition to the liberal energy market and energy networks will contribute not only to strengthening relations between the two countries, but also to the energy transition process," the minister said.

Parliamentary Under Secretary of State, Minister for Exports Graham Stuart expressed the UK’s support for new directions in the development of relations between Azerbaijan and the UK.

“The UK has the greatest potential and experience to support the global process of using clean technologies, beginning from offshore wind power, smart energy systems, sustainable construction and agriculture and ending with eco-financing and electric vehicle manufacturing,” Stuart said.

“I hope that the government's efforts to liberalize and reform the energy market will make Azerbaijan a more attractive country for investors,” Stuart said. “Even more UK’s companies will be able to support the projects to improve infrastructure and become important partners in opening the great economic potential of Azerbaijan in the future."

The mutual presentations on a number of issues, including the development of the energy sector, the investment climate, opportunities for small and medium-sized businesses, further planning in the field of education, taking into account the needs of the two countries and an assessment of bilateral opportunities in this sphere, smart cities, the use of artificial intelligence, an overview of Azerbaijan's plans in the field of digital transformation and the UK's experience in this sphere, digital health, reforms in the financial sector, as well as cooperation in the field of the creative economy and creative education were discussed and heard during the meeting.

A Memorandum of Understanding for cooperation on the transition to clean energy was signed between the Ministry of Energy of Azerbaijan and the Ministries of International Trade of the UK and Northern Ireland during the event.

The document envisages the strengthening of cooperation between the two countries in the field of energy and the study of possibilities for solving the problem of climate change.

The cooperation, the transition to a liberal energy market will be carried out, as well as the information and experience on renewable energy sources, energy efficiency, low-carbon technologies will be exchanged within the memorandum.

A protocol of intent in the field of digital government was signed between the E-Gov Development Center of the State Agency for Public Service and Social Innovations under the president of the Republic of Azerbaijan and UK’s Government Digital Service.

A protocol was also signed following the fourth meeting of the Joint Intergovernmental Commission on Economic Cooperation between the Republic of Azerbaijan and the Government of the United Kingdom of Great Britain and Northern Ireland.

The agreement was made to hold the 5th meeting of the Intergovernmental Commission in 2022 in London.