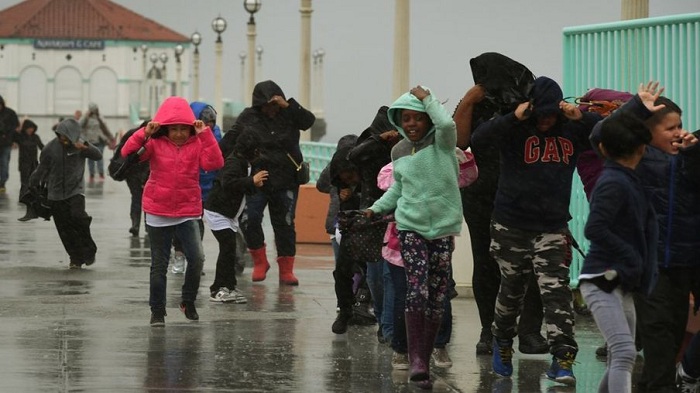 One of the strongest storms possibly in decades - dubbed a "bombogenesis" - is set to drench California this weekend, prompting fears of flash floods.

The system is dumping torrential downpour from Los Angeles to San Francisco, fuelled by an "atmospheric river" extending to the Pacific, according to Azvision.az.

Rainfall predictions range from 2-6in (5-15cm) on the coast and from 5-10in in foothills and coastal mountains.

After five years of drought, a series of storms have filled state reservoirs.

California`s Sierra Nevada mountain range is also loaded with snow. Runoff from its snowpack normally supplies about a third of the state`s water.

Meteorologists describe the "bombogenesis" as an intense extra-tropical cyclonic low-pressure area, or "a weather bomb".

"The storm looks to be the strongest storm to hit southwest California this season," the National Weather Service said.

"It is likely the strongest within the last six years and possibly even as far back as December 2004 or January 1995."

Gusts of 87mph (140km/h) were reported on the Big Sur scenic coastal highway.

Ryan Maue, a meteorologist for WeatherBell Analytics, told the Los Angeles Times that 10 trillion gallons of rain would fall on California in the next week, enough to power Niagara Falls for 154 days.

Hundreds of flights have been cancelled or delayed in and out of the Golden State.

Evacuations have been recommended at hundreds of homes in the city of Duarte, in the foothills of the San Gabriel Mountains east of Los Angeles, and in parts of Camarillo Springs in Ventura County.

The storm is not expected to bring major rainfall to the far north, where flooding damage to the Lake Oroville dam forced the evacuation of 188,000 people last weekend.