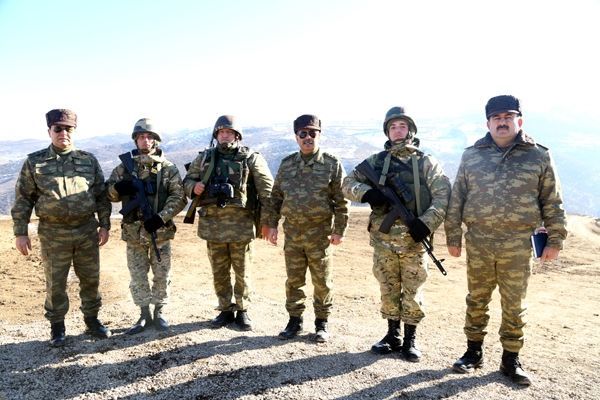 Azerbaijan’s Defense Minister, Colonel-General Zakir Hasanov and the senior staff of the ministry paid a visit to the military units located on the frontline.

The visit took place under the instructions of Azerbaijani President, Commander-in-Chief of the Armed Forces Ilham Aliyev, the Defense Ministry’s press service told APA on Thursday.

Minister Hasanov viewed the conditions created in the military units located along the Azerbaijani-Armenian border in the direction of Tovuz district and watched Armenia’s army positions.

The minister met with the military personnel performing combat duty in mountainous and difficult climatic conditions on the line of contact between Azerbaijani and Armenian troops. Hasanov was briefed on the operational situation in the area.

The minister also checked the combat duty in the trenches, moral and psychological readiness of personnel and their social conditions. He was also reported that the military units located on frontline were provided with drinking water, heating, shower and other necessary facilities for the winter season.

The ministry’s senior staff had a talk with the personnel during lunch.

The minister expressed his confidence in the Armed Forces’ capability to fulfill any order by the head of state, praising their combat capability and psychological readiness.

The ministry’s senior staff also met locals in one of the front line villages and discussed with them the defense of residential areas and people’s security.