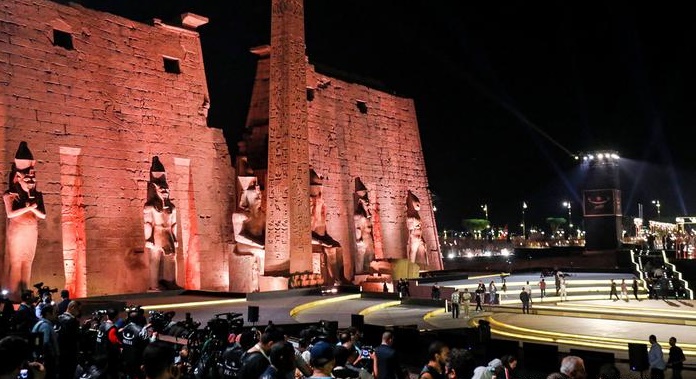 Egypt reopened Thursday night the Avenue of Sphinxes in Upper Egypt's Luxor Province after years of renovation works, with hopes to internationally promote the country's ancient civilization and its tourism sector.

The inauguration ceremony was attended by Egyptian President Abdel-Fattah al-Sisi, a number of ministers and many foreign ambassadors.

The 2400-year-old Avenue of Sphinxes is a 2,700-metre-long ancient walkway with 1,057 ram-headed and man-headed sphinxes lining along both sides of the road. The avenue once connected the temples of Karnak and Luxor, said Khaled al-Anany, Egyptian minister of tourism and antiquities.

The historical road was uncovered more than 70 years ago, and excavations continued during last decades. However, excavations and restoration works paused in 2011 due to political turmoil.

"Excavations and development work resumed in 2017, given that it is one of the important elements of the city which is on the UNESCO World Heritage List," the minister told Xinhua after the ceremony.

The walkway was used once a year during the Opet festival, an annual pharaonic commemoration when ancient Egyptians paraded along the walkway, carrying the statues of Amun and Mut in a symbolic re-enactment of their marriage.

As the reopening ceremony started, the ancient road and the sphinxes were lit up, revealing the beauty of the statues that were recently restored.

The celebration also included an artistic performance inspired by the ancient 27-day long Opet Festival, which was celebrated by the ancient Egyptians in the second month of the Nile flood.

Former Egyptian Minister of Antiquities and renowned Egyptologist Zahi Hawass said that ancient Egyptians used to call the avenue "the way of God."

"The road used to witness the celebration of the Opet Festival in the presence of kings, statesmen and priests ... songs and celebrations continued for 11 days during the rule of the 18th dynasty in ancient Egypt, to reach 27 days in later families," he told Xinhua.

For his part, Mostafa Waziri, secretary-general of the Supreme Council of Antiquities, said the reopening of the avenue is a cultural promotional celebration that aims to promote tourism in Luxor as the largest open museum in the world, and to highlight its distinct and diverse tourist and archaeological potentials.

"The ceremony is a message to the whole world that Egypt and all its cities are safe and rich of heritage," he told Xinhua.

The reopening ceremony is the second international event held by Egypt this year to honor its cultural heritage, after Egypt moved 22 Pharaonic mummies from the Egyptian Museum on Tahrir Square in downtown Cairo to the National Museum of Egyptian Civilization in a remarkable festival, known as "The Pharaoh's Golden Parade."