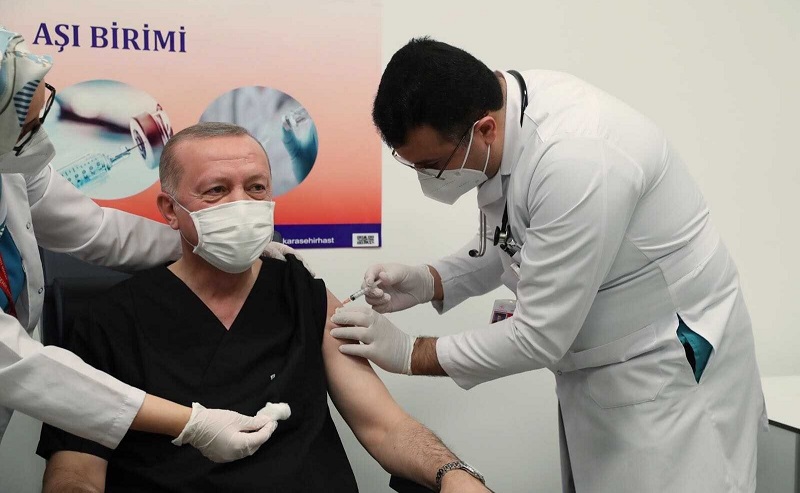 "I got vaccinated as well," Erdoğan said on the Telegram social network after receiving the jab.

Addressing reporters while leaving the hospital, the president said that some 256,000 people across Turkey have received their first doses so far.

"We aim to vaccinate all of our citizens as soon as possible," he said adding that nearly 30 million more doses of vaccine will come from China.

Turkey began administering the shots developed by China's Sinovac to health workers on Thursday, as it rolls out a nationwide vaccination program against the disease that has killed more than 23,000 people in the country. It has so far vaccinated more than 200,000 health workers.

Health Minister Fahrettin Koca and members of the ministry's Coronavirus Scientific Advisory Board were the first to get shots late Wednesday. In the early hours of Thursday, mass vaccination started for thousands of health care workers across the country.

The country’s Medicines and Medical Devices Agency (TITCK) on Wednesday approved the emergency use of the vaccine. The approval came after a 14-day testing period, which began when the first shipment of the vaccine, containing 3 million doses, arrived in the country on Dec. 30.

Last month, Turkish researchers said CoronaVac showed a 91.25% efficacy based on an interim analysis of 29 cases. A fuller analysis can take place once they reach 40 cases.

The vaccine will be administered by the Health Ministry's COVID-19 vaccine application units, which will be established in family health centers, as well as in private and university hospitals, according to the Health Services Directorate.