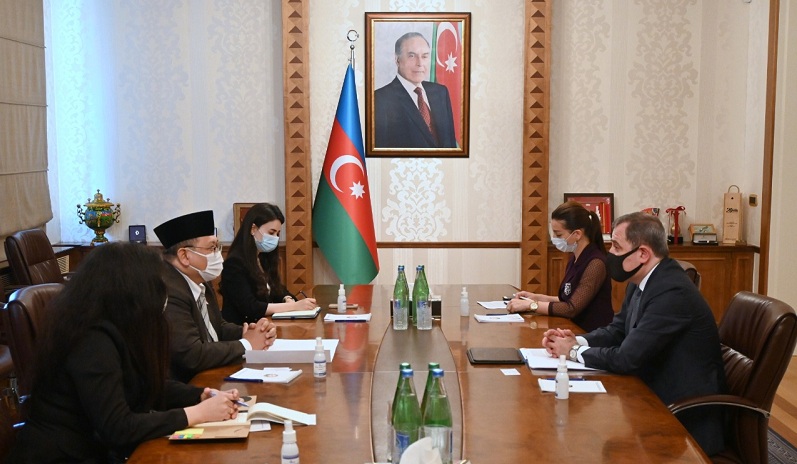 On July 28, 2020, Minister Jeyhun Bayramov received Ambassador of the Republic of İndonesia to the Republic of Azerbaijan Husnan Bey Fananie upon the termination of his diplomatic mission.

Minister noted with satisfaction the intensive development of relations between the countries both in bilateral and multilateral frameworks. He stressed the development of cooperation between both states within international organizations, in particular within the Organization of Islamic Cooperation and Non-Aligned Movement.

Minister Jeyhun Bayramov expressed his appreciation to the Indonesian side for demonstration of the firm position with regard to the respect of the sovereignty and territorial integrity of the Republic of Azerbaijan.

Further Minister Jeyhun Bayramov informed his interlocutor on the aggressive policy of Armenia, which threatens peace and security in the region, as well as about the pre-planned military provocation committed by the Armenian armed forces in the direction of the Tovuz district of the Azerbaijan-Armenian border on July 12, 2020. It was noted that Armenia couldn’t achieve any goal by this provocation, on the contrary, faced with the firm position of the international community.

Ambassador Husnan Bey Fananie conveyed his congratulations to Jeyhun Bayramov with regard to his appointment of the Minister of Foreign Affairs. Further, he expressed his condolences to the Azerbaijan Government in general and the families of martyrs who lost their lives as a result of tension between two states. Ambassador noted the firm position of Indonesia with regard to the respect of sovereignty and territorial integrity of the Republic of Azerbaijan within its internationally recognized borders.

While mentioning the efforts provided during his term regarding the development of relations between both states, Ambassador noted the existing potential of development of cooperation in various spheres.

Ambassador also emphasized that the exchange of visits would contribute to the further development of relations between the two states.