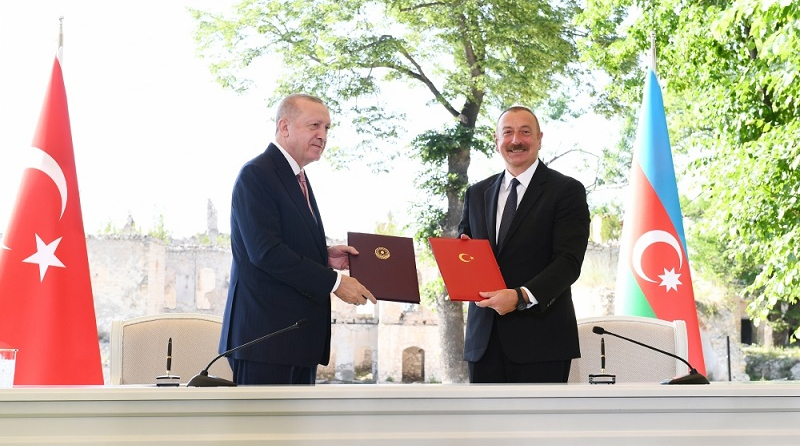 The full text of the Shusha Declaration on Allied Relations, which was signed June 15 by Azerbaijani President Ilham Aliyev and Turkish President Recep Tayyip Erdogan in the city of Shusha, has been published.

The text of the document reads as follows:

Once again reaffirming their adherence to all international documents signed between the two friendly and fraternal countries, and to the Treaty of Kars of 13 October 1921,

Realizing the importance of combining the capabilities and potentials of both countries in the political, economic, defense, cultural, humanitarian, healthcare, educational, social spheres, in the field of youth and sports in common interests,

Stressing the importance of continuing joint efforts to ensure global and regional peace, stability and security in accordance with the principles and norms of international law, including the Charter of the United Nations,

Expressing the need for mutual coordination of activities in regional and international strategic issues of common interest,

Proceeding from the principles of solidarity and mutual assistance in bilateral and multilateral formats in such issues of national interest as independence, sovereignty, territorial integrity of the Republic of Azerbaijan and the Republic of Turkey, inviolability of their internationally recognized borders,

Combining efforts in promoting joint activities on the regional and international plane aimed at the stable development of the Turkic world,

Emphasizing that the wise sayings of the founder of the Republic of Turkey, Mustafa Kemal Ataturk, and the national leader of the Azerbaijani people, Heydar Aliyev, “The joy of Azerbaijan is our joy and its sorrow is ours too” and “One nation, two states”, are regarded as the national and spiritual heritage of our peoples,

The sides, expressing their satisfaction with the level of strategically developing relations between the two friendly and fraternal countries, note the importance of continuing the political dialogue at all levels and mutual visits at the highest level.

The sides proudly declare that Azerbaijan, having won a victory during the 44-day Patriotic war, put an end to the aggressive policy of Armenia that lasted for 30 years, liberated its lands from occupation, secured the victory of justice and the restoration of international law.

Azerbaijan highly appreciates the moral and political support of the Republic of Turkey in ending the 30-year Armenian aggression, liberating the occupied lands and restoring the territorial integrity of Azerbaijan. The parties will continue their efforts aimed at strengthening stability and security in the Caucasus region, restoring all economic and transport links, normalizing the relations between countries of the region and ensuring long-term peace. In this context, the special geographical location of the Nakhchivan Autonomous Republic of the Republic of Azerbaijan will be taken into account. The sides emphasize that the contribution made by Turkey to the operation of the Turkish-Russian Joint Center in the territories of Azerbaijan liberated from occupation plays an important role in ensuring peace, stability and prosperity of the region.

The Republic of Azerbaijan and the Republic of Turkey, guided by the principles of independence, sovereignty, territorial integrity, inviolability of internationally recognized borders, noninterference in the internal affairs of states, determine the political and legal mechanisms of their allied relations.

The parties make joint efforts aimed at the development of international relations based on peace, friendship and good-neighborliness through stability and prosperity on a regional and international scale, as well as the settlement of conflicts and the solution of issues of global security and stability.

Demonstrating solidarity and mutual support on international issues of a topical nature and of mutual interest, the parties, speaking from a consolidated position, will deepen bilateral cooperation and support each other within the framework of international and regional organizations, including the United Nations, the OSCE, the Council of Europe, the Cooperation Council of Turkic-Speaking States, and the Organization of Islamic Cooperation.

If, in the opinion of one of the parties, there is a threat or an act of aggression from a third state or states against their independence, sovereignty, territorial integrity, the inviolability or security of their internationally recognized borders, the parties will hold joint consultations and, in order to eliminate this threat or acts of aggression, carry out initiatives in accordance with the purposes and principles of the UN Charter and provide each other with the necessary assistance in accordance with the UN Charter. After determining through urgent discussions the volume and form of such possible assistance, a decision will be made to secure defense needs for the adoption of joint measures and coordinated activities will be organized of power-wielding and administrative agencies of the Armed Forces.

The parties will continue to make joint efforts aimed at reorganizing and modernizing the armed forces of the two fraternal countries in accordance with modern requirements.

Guided by the clearance of mined areas, the parties will support activities aimed at normalizing life in the regions liberated from Armenian occupation.

The parties will encourage the exchange of personnel aimed at strengthening the defense capability and military security, conducting joint exercises and trainings, increasing the interaction capabilities of the armed forces of the two countries, cooperating closely in the management of weapons and ammunition on the basis of modern technologies, and ensuring coordinated activities of authorized agencies and institutions for this purpose. Azerbaijan and Turkey will support the implementation of military exercises together with the armies of other friendly states.

The parties, carrying out mutual technological exchange in the maritime, air and space spheres, and taking into account their national and international obligations, will encourage the implementation of common projects in order to develop joint capabilities and make a positive contribution to the development of mutual technologies in the defense industry, provide their weapons and ammunition, and mutually encourage production technologies and support the creation of production industries that do not currently exist in their countries, the implementation of joint research and production activities, cooperation between defense industry bodies of the two countries in the field of technology, military products and services in the domestic and international markets.

The parties note that the military-political cooperation developed between the two states and meeting their national interests is not directed against third states.

The parties emphasize the importance of further developing cooperation in the field of cyber-security, and will conduct joint scientific research, train specialists in this area and encourage mutual technical cooperation.

The parties will step up efforts aimed at diversifying national economies and exports in trade and economic relations, as well as creating joint production in promising industries and developing more favorable conditions for the mutually beneficial development of investment cooperation. In this context, Azerbaijan and Turkey will take measures aimed at creating mechanisms for organizing the free movement of goods.

The parties emphasize the advanced role of Turkey and Azerbaijan in the implementation of the strategic Southern Gas Corridor, which contributes to the energy security of the region and Europe and ensures the diversification of sources and routes of natural gas. The parties will continue their efforts in a coordinated manner aimed at rational use and further development of the Southern Gas Corridor. The parties, taking into account the processes in the global energy sector, also express their intention to continue their efforts in the field of electricity and to intensify efforts towards regional cooperation in order to enhance the security of energy supply of the region.

The parties will strengthen their cooperation in order to increase the competitiveness of the East-West Transport Corridor passing through the territory of the two countries. Azerbaijan and Turkey, using the technologies of intelligent transport systems, will further develop the transit and transport potential on the Azerbaijani-Turkish sections of international transport corridors.

The parties emphasize that the current level of relations between Turkey and Azerbaijan contributes to the overall regional and international peace and prosperity and that by bringing peace and prosperity not only to the two countries but also to the region as a whole, these relations serve stability, peace and the interests of the international community headed by countries of the region.

The parties will expand and deepen their joint efforts and cooperation in the field of combating various threats and challenges that have a negative impact on regional and international stability and security, in particular terrorism, all its forms and manifestations, financing, as well as the proliferation of weapons of mass destruction, organized crime, money laundering, drug trafficking, human trafficking, illegal migration.

The parties will consolidate their efforts to further develop cooperation between Azerbaijani and Turkish diasporas living in different countries, take joint action against common problems they face and show consistent solidarity.

The parties will encourage coordination and mutual support of diaspora activities in representing their countries and communicating the historical truth related to the protection of national interests to the world.

The parties, stressing that Armenia's unfounded claims against Turkey, attempts to distort history and politicize historical facts through their distortion, harm peace and stability in the region, strongly support the efforts of Turkey in this context, which has opened its archives in connection with the events of 1915 in order to encourage the opening of archives in Armenia and other countries and enable a research to be conducted on this topic by historians.

In accordance with the “Memorandum of Understanding on Strategic Cooperation between the Republic of Azerbaijan and the Republic of Turkey in the Field of Media” signed on 10 December 2020, the parties, taking into account the capabilities of the Azerbaijan-Turkish media platform, will further strengthen cooperation between relevant agencies of the two countries in the field of information, communication and public diplomacy. Within this framework, active consultations and exchanges of information will be regularly held between the ministers of foreign affairs.

The parties encourage further strengthening of inter-parliamentary cooperation and increased interaction in this direction.

The parties will ensure the provision of the necessary public support for important manifestations of the common values of the two peoples and carry out joint activities to protect the historical and cultural heritage.

The parties note the intensification of national and international efforts that will serve the unity and well-being of the Turkic world.

The parties will strengthen cooperation in the field of promoting and advancing Turkic cultural heritage at the international level.

In order to further strengthen Turkic cooperation, the parties will give an impetus to the activities carried out within the framework of the Cooperation Council of Turkic-Speaking States, the Turkic Academy, the Foundation of Turkic Culture and Heritage, TURKSOY and the Inter-Parliamentary Assembly of Turkic-Speaking Countries.

The parties express their satisfaction with the agreement reached on the entry of citizens of one party into the territory of the other party with domestic passports only and, noting the exceptional importance of this agreement in terms of proximity between our peoples and ties between them, approve the adoption of appropriate measures to enable citizens of one party to obtain the right to reside in the territory of the other party in accordance with the principle of reciprocity.

The parties, providing the necessary state support, will continue to develop and deepen close ties on the basis of common values in the humanitarian sphere, in the field of social protection, science, education, healthcare, culture, youth and sports. To this end, relevant agencies of the two countries will carry out joint activities on a permanent basis.

This Declaration is signed in the city of Shusha on 15 June 2021 in the Azerbaijani and Turkish languages in two original copies, and all texts are equally authentic.