In Photos: Deadly tornados ravage US states, leaving devastation behind 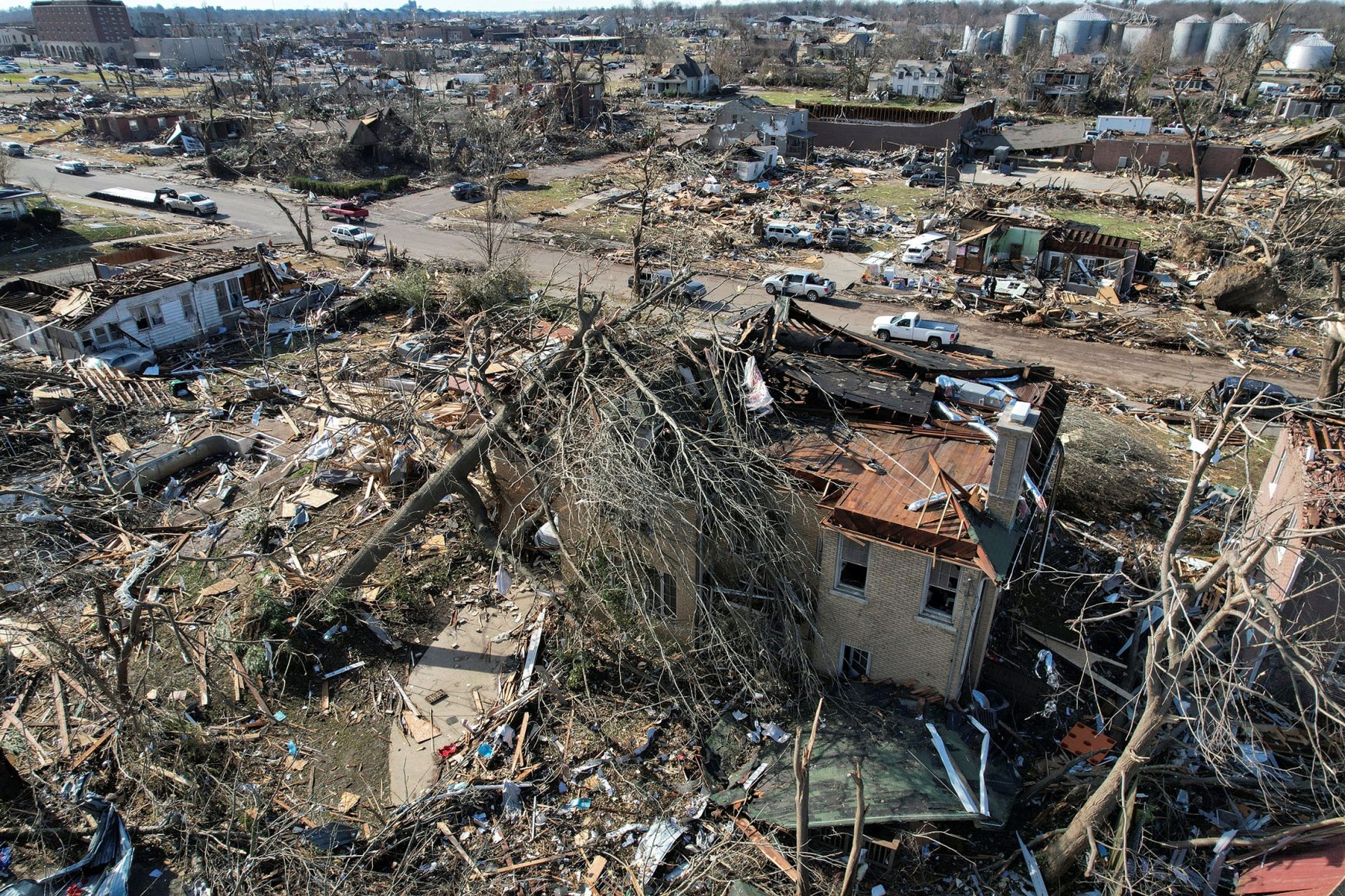 More than 50 tornadoes were reported across eight states late Friday and early Saturday, killing dozens of people and leaving a trail of devastation.

The severe weather caused the collapse of an occupied candle factory in Kentucky, an Amazon warehouse in western Illinois and a nursing home in Arkansas, killing people at each site and leaving responders scrambling to rescue survivors.

"The level of devastation is unlike anything I have ever seen," said Kentucky Gov. Andy Beshear. 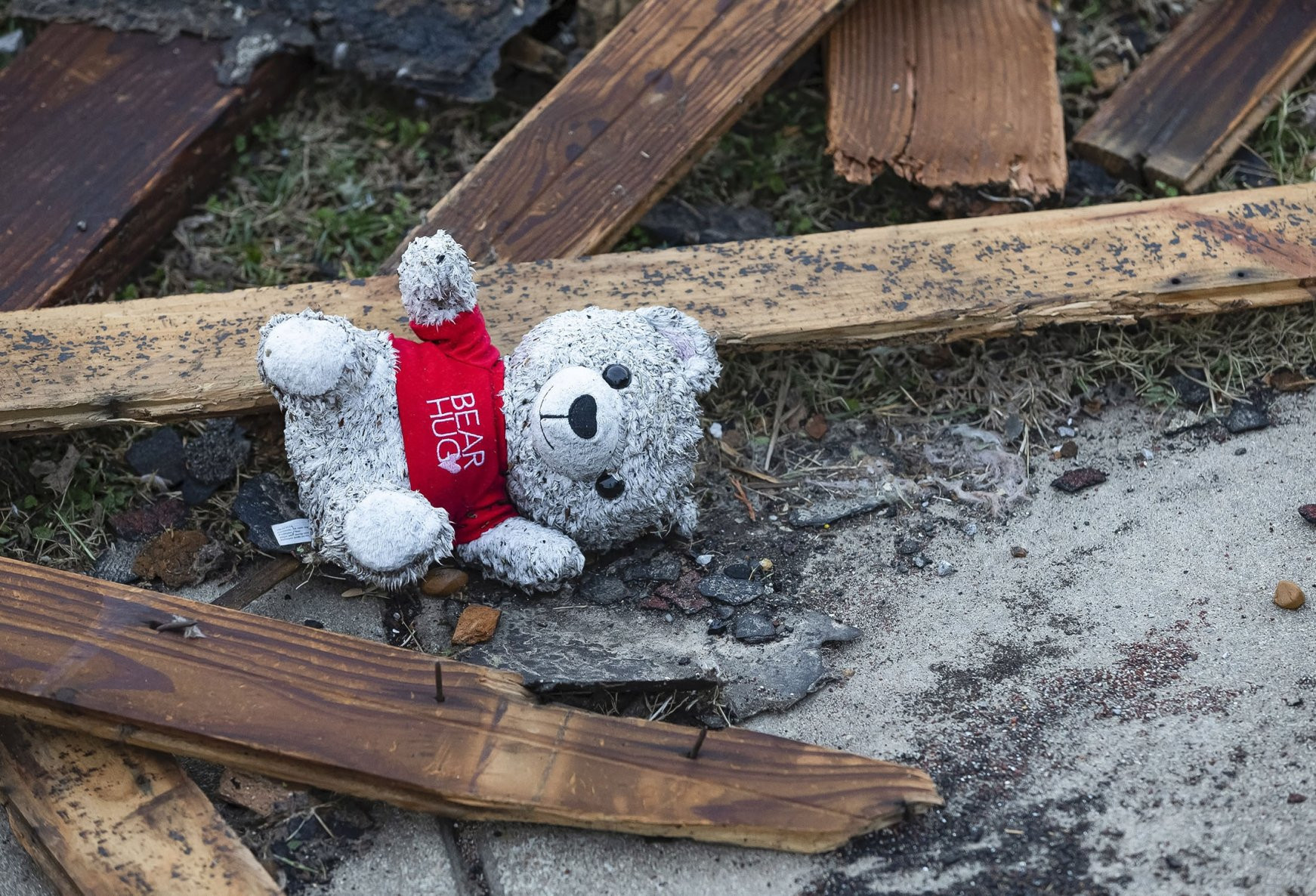 Tornadoes ripped through five U.S. states overnight, leaving more than 70 people dead Saturday in Kentucky and causing multiple fatalities at an Amazon warehouse in Illinois that suffered "catastrophic damage" with around 100 people trapped inside. A child's toy amongst damage caused by a tornado in Mayfield, Kentucky, USA, Dec, 11, 2021. Large storms overnight in the area generated multiple tornados and have reportedly killed as many as 70 people, according to Kentucky Governor Andy Beshear. (EPA/ADDISON LEBOUTILLIER) 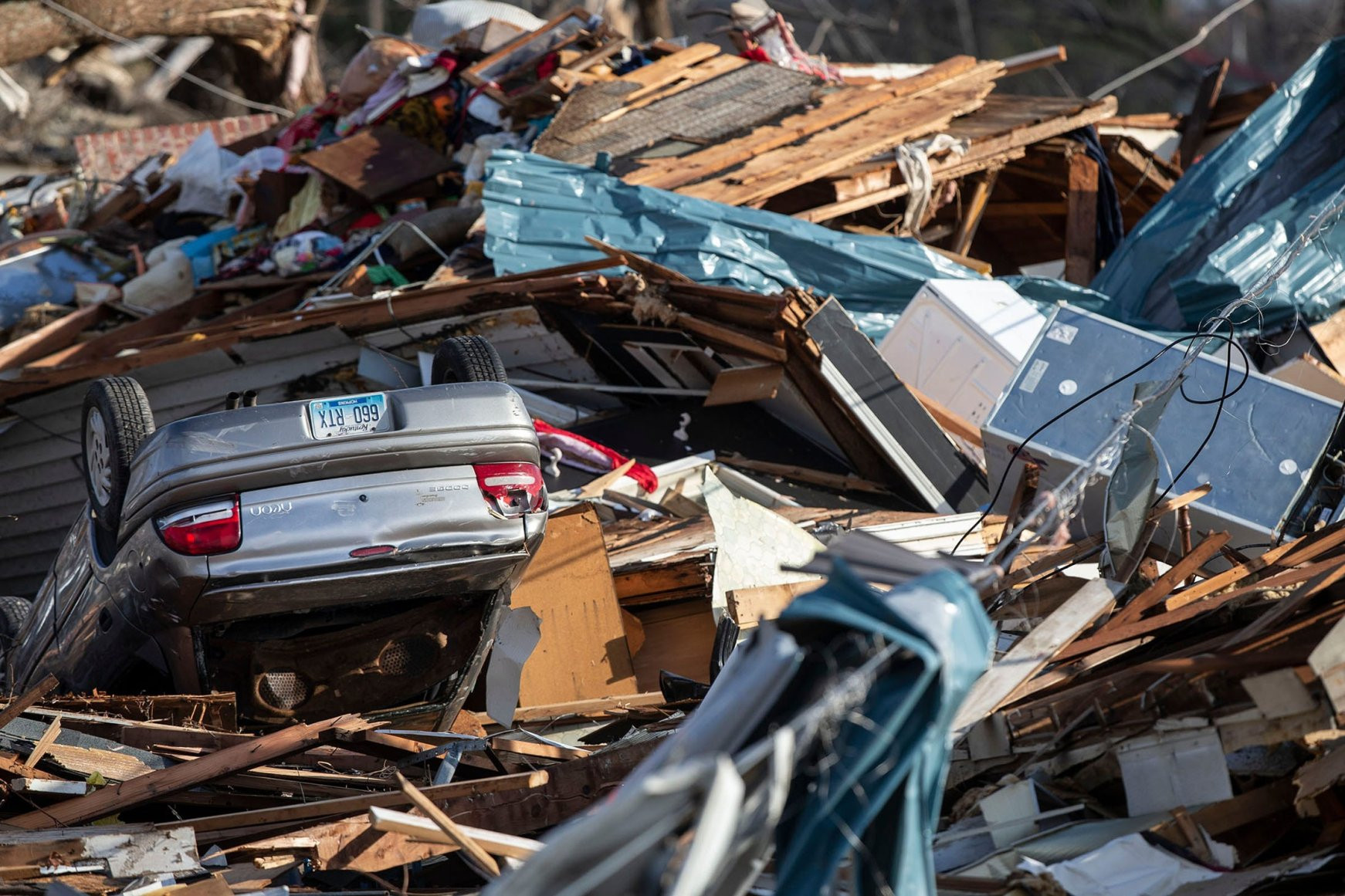 The western Kentucky town of Mayfield was "ground zero" of the storm – a scene of "massive devastation," one official said. A car is flipped upside down and buried in rubble in Barnsley, Kentucky after the area was hit by overnight tornados, Dec. 11, 2021. (REUTERS PHOTO) 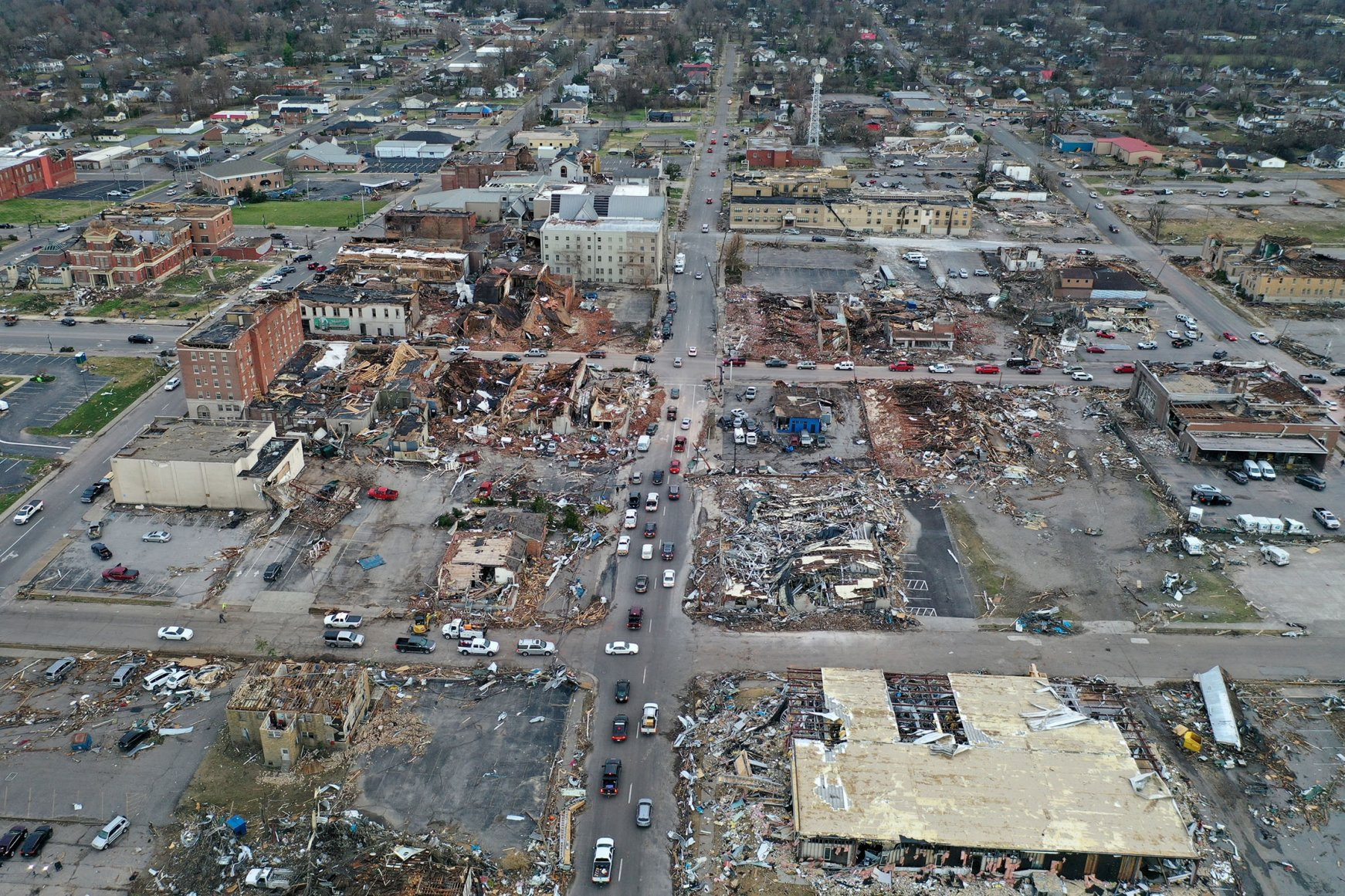 An aerial view of homes and business destroyed by a tornado in Mayfield, Kentucky, Dec. 11, 2021. (AFP PHOTO) 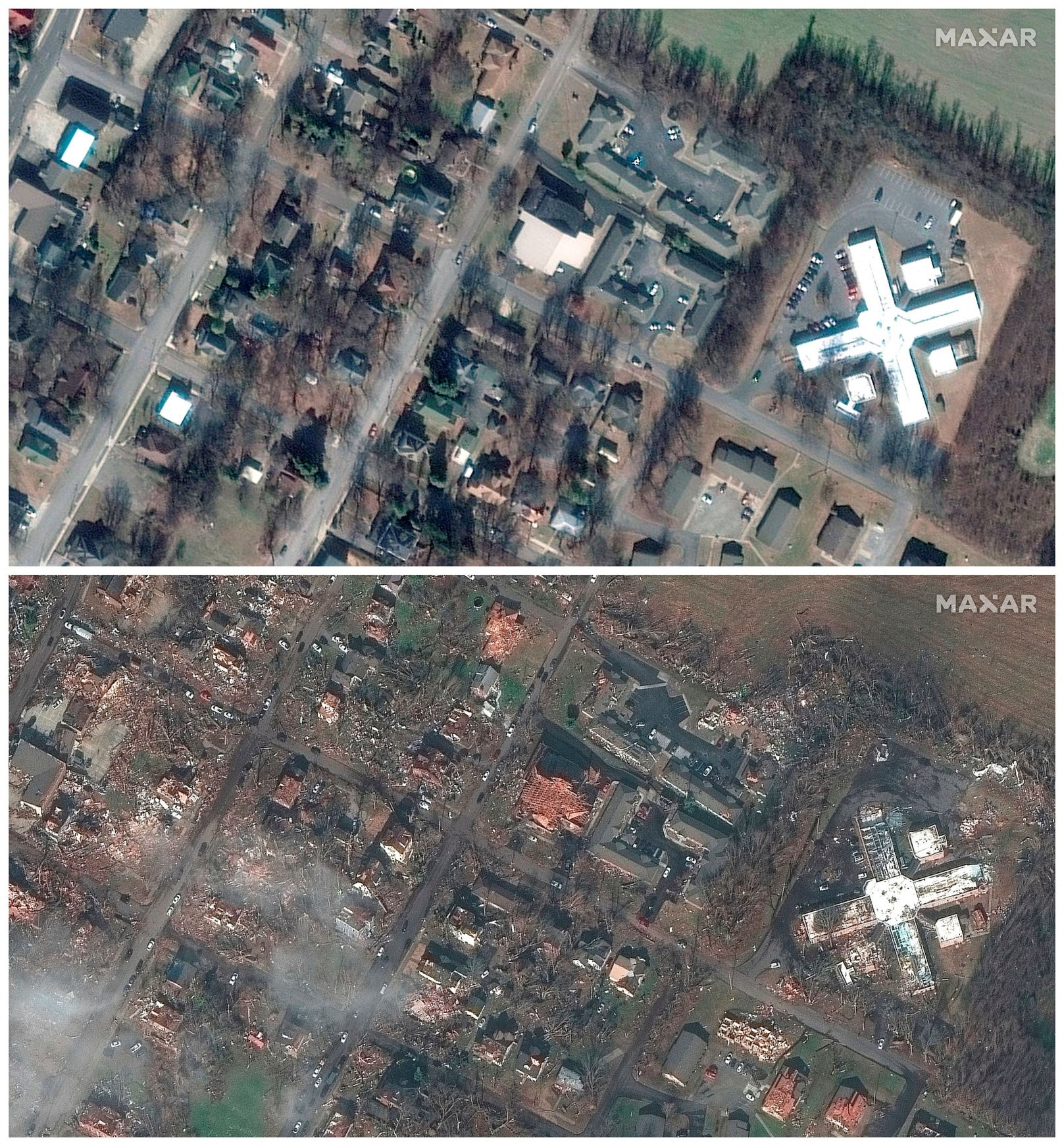 A combination of satellite images shows homes and buildings in Mayfield, Kentucky, U.S., before and after a devastating outbreak of tornadoes ripped through several U.S. states, Jan. 28, 2017 (top), and Dec. 11, 2021. (MAXAR TECHNOLOGIES/HANDOUT VIA REUTERS) 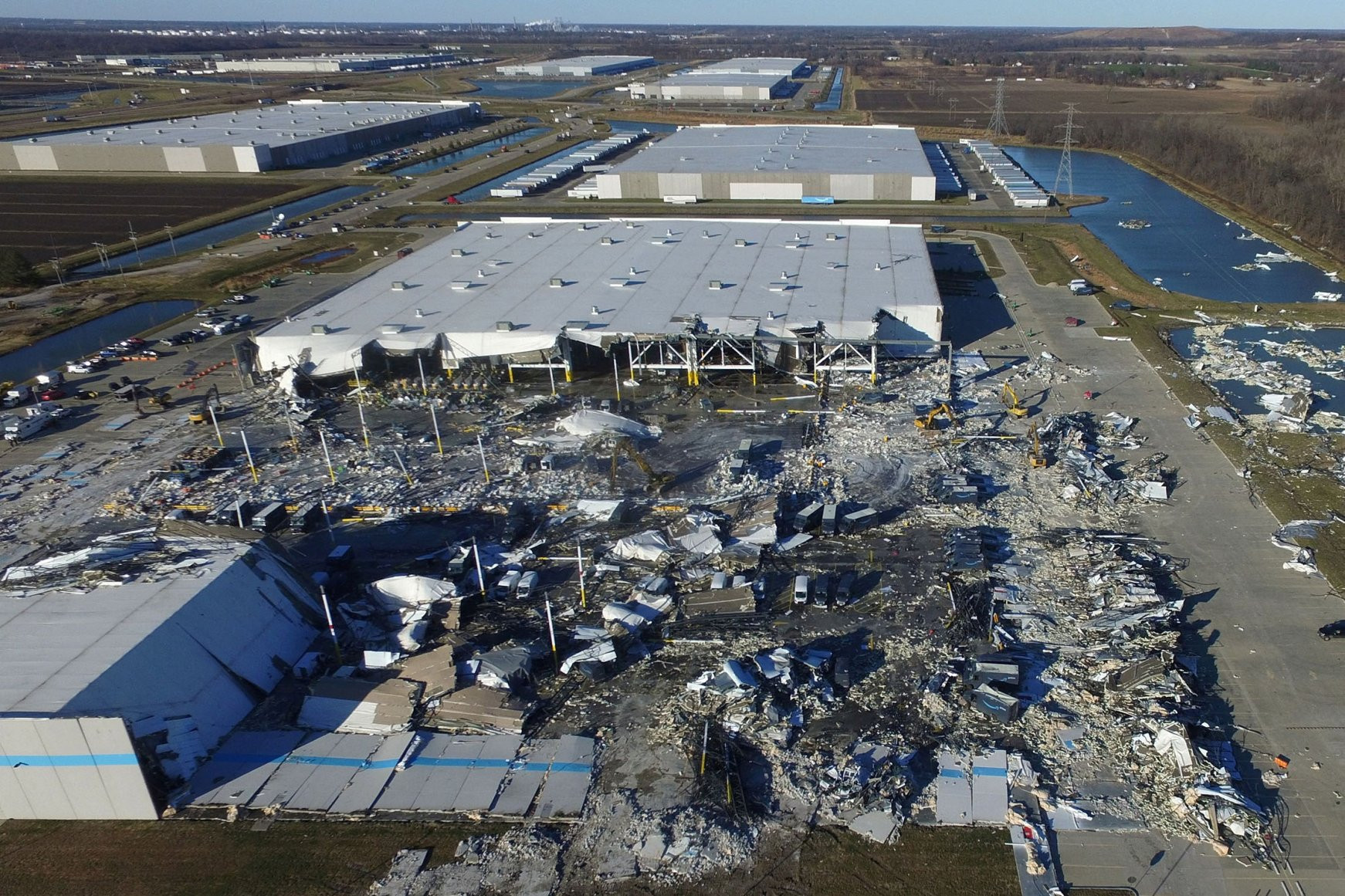 The site of a roof collapse at an Amazon.com distribution center a day after a series of tornadoes dealt a blow to several U.S. states, in Edwardsville, Illinois, U.S., Dec. 11, 2021. (REUTERS PHOTO) 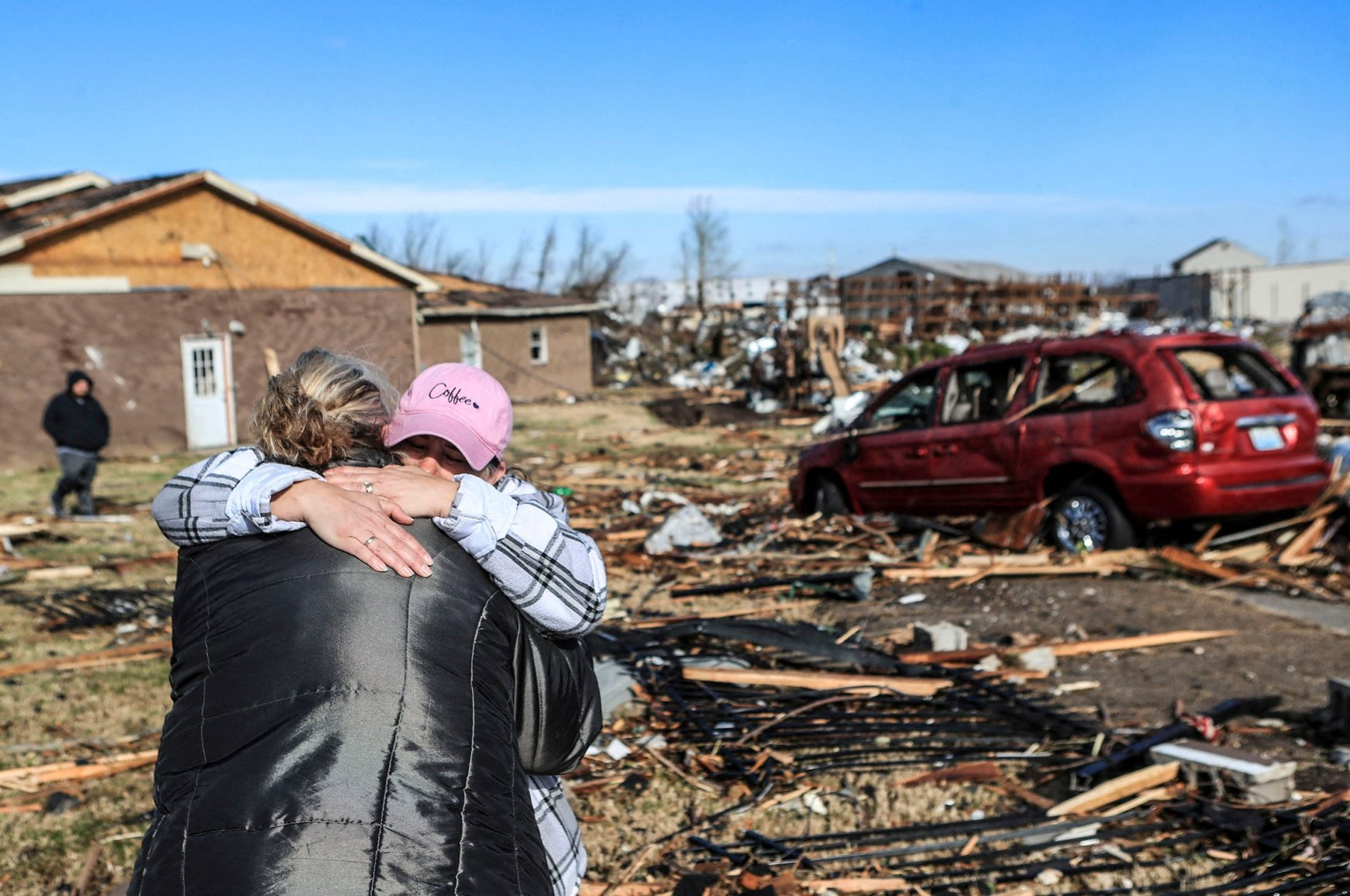 Irene Noltner consoles Jody O'Neill outside The Lighthouse, a women and children's shelter that was destroyed by a tornado along with much of the downtown of Mayfield, Kentucky, U.S., Dec. 11, 2021. (MATT STONE/USA TODAY NETWORK VIA REUTERS) 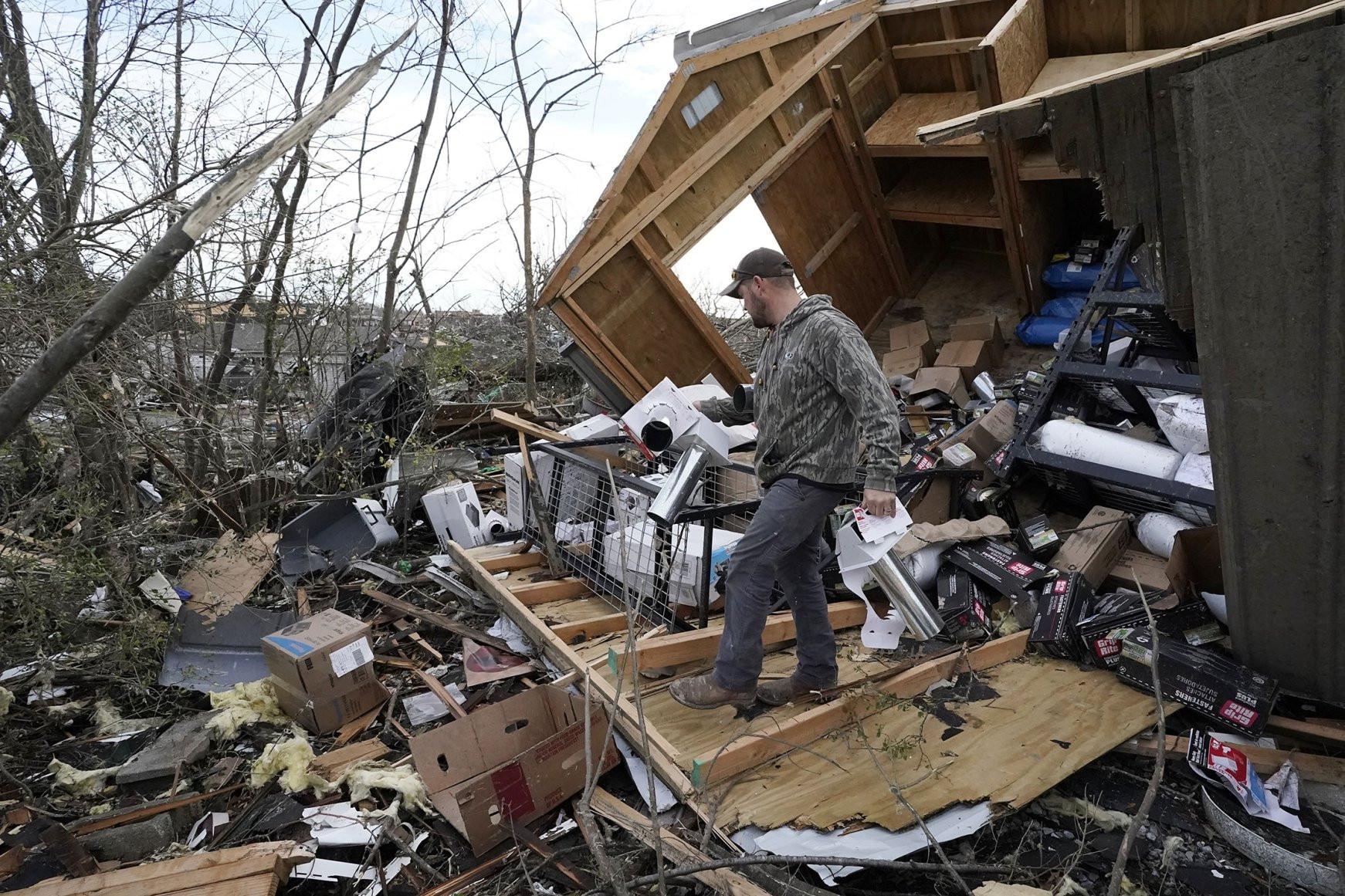 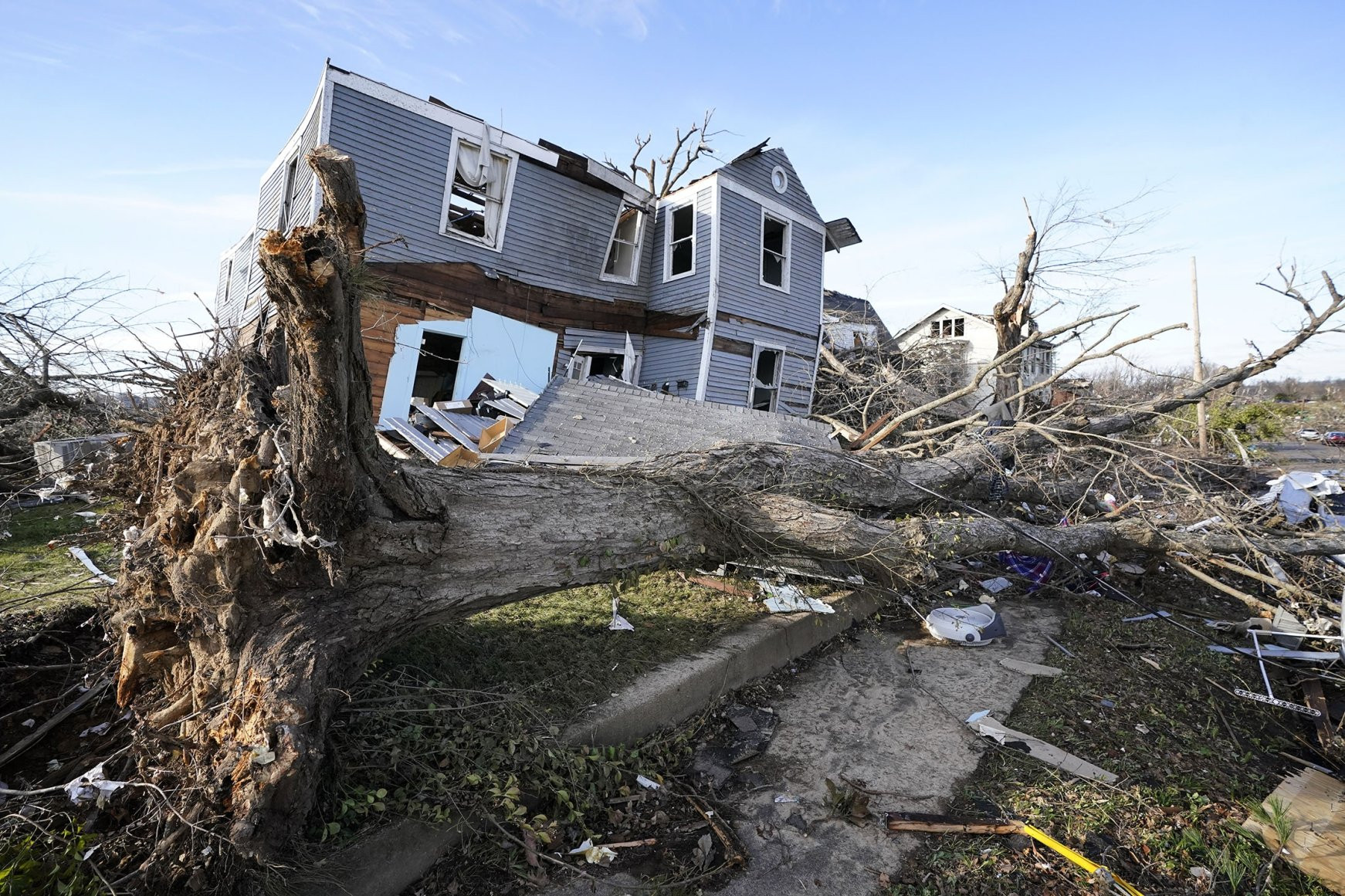 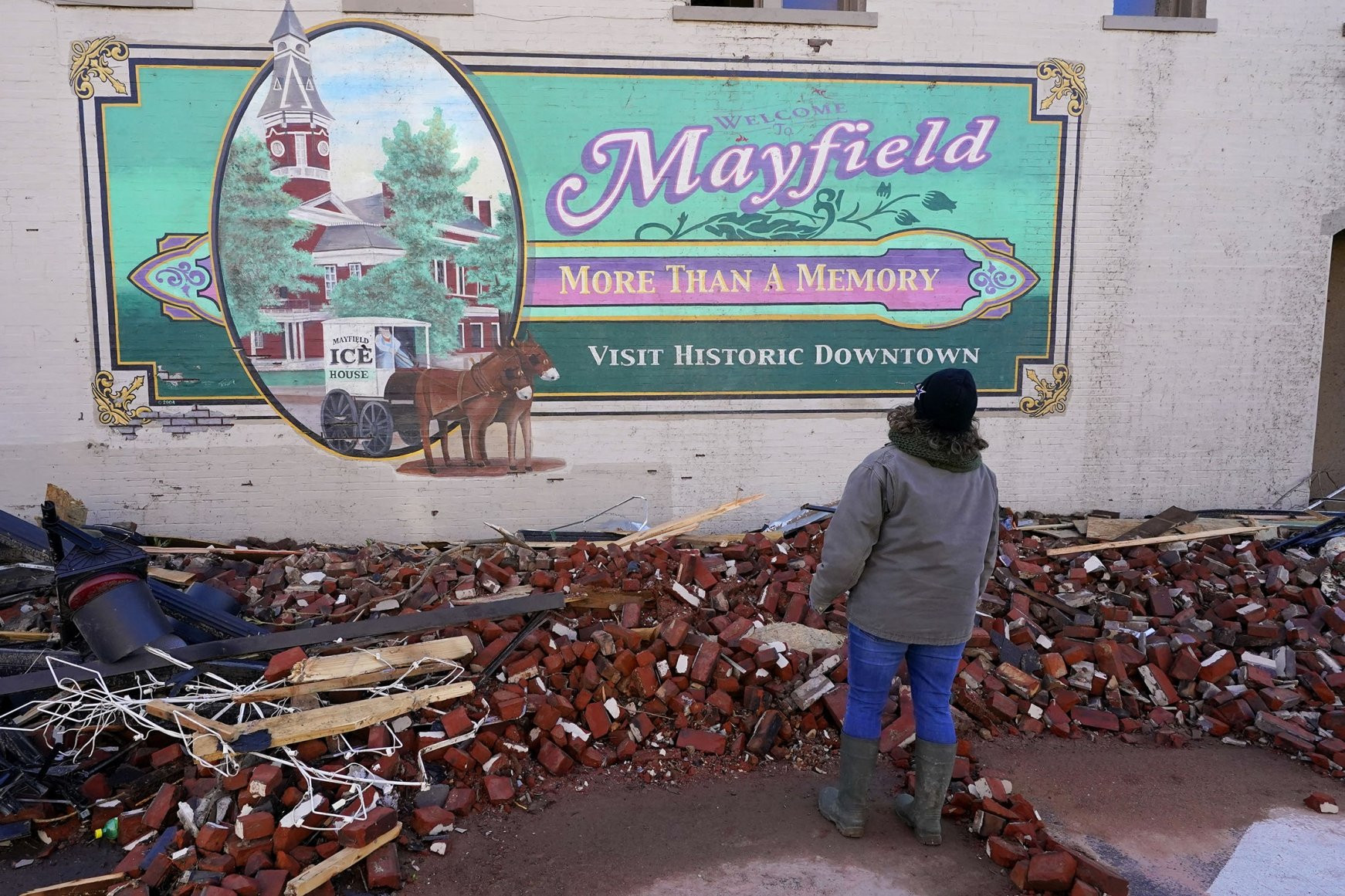 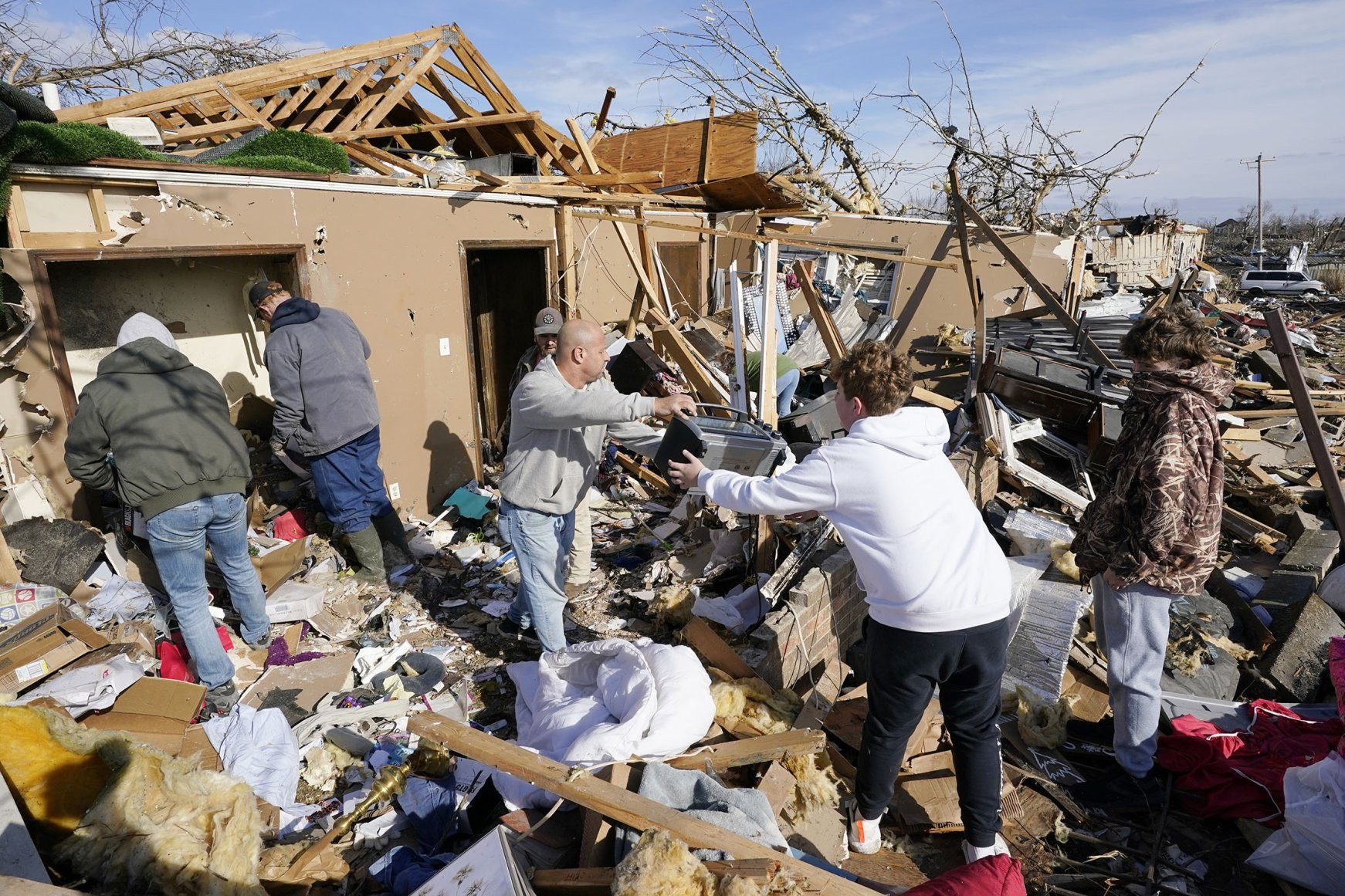 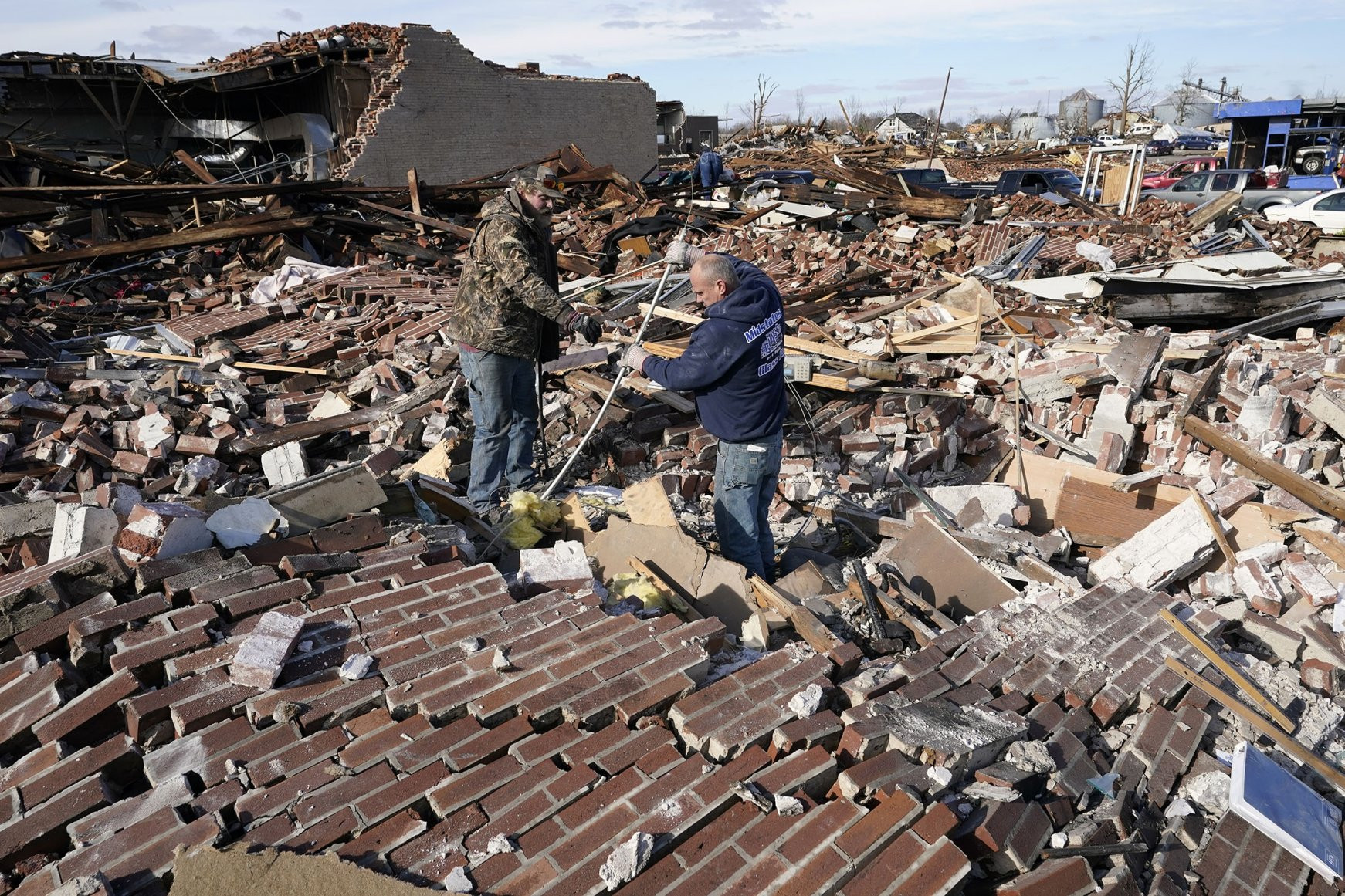