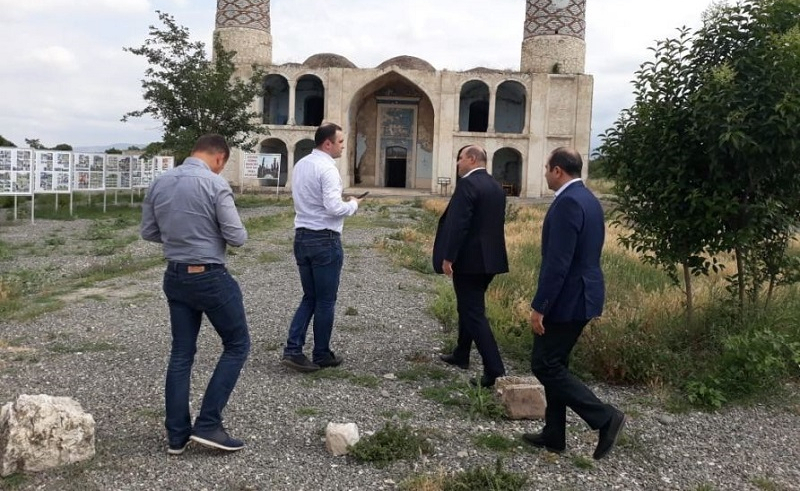 A Latvian parliamentary delegation, led by the head of the Support Group for Cooperation with the Parliament of Azerbaijan, Romans Naudins, eyewitnessed the traces of vandalism committed by Armenians in the Juma Mosque in Aghdam city.

The delegation was informed about the war crimes of the Armenians, about the cultural, historical and religious monuments destroyed by them. It was noted that in Aghdam, as in other former occupied districts of Azerbaijan, Armenians committed unprecedented vandalism against the historical and cultural heritage of Azerbaijan. Monuments, cultural centers, mosques, cemeteries of the region were destroyed and desecrated, and some of them were armenianized.

The Aghdam Juma Mosque is one of the historical and religious monuments subjected to Armenian vandalism.

This mosque, included in the list of monuments of national significance, belongs to the architectural school of Karabakh mosques. Armenians didn’t completely destroy the mosque, to use its minarets for military coordination and observation.

The minarets of the mosque were destroyed from the inside, the ceiling was demolished in several places, the design and inscriptions were deliberately turned into disrepair. The Armenian vandals kept cattle in the Aghdam Juma Mosque, demonstrating their hatred towards Azerbaijanis and the Islamic world.

Azerbaijan liberated Aghdam district and other territories from the Armenian occupation as a result of the Second Karabakh war (from late Sept. to early Nov.2020).