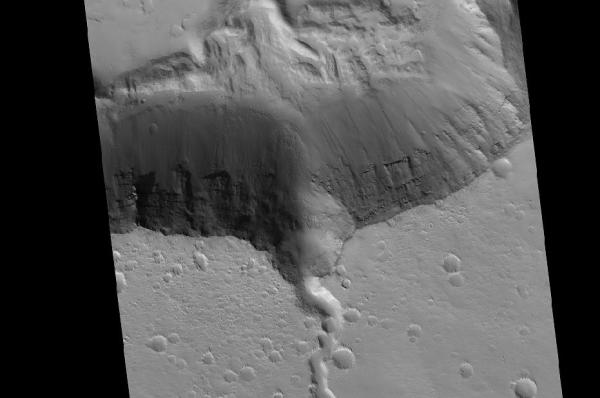 The chemistry of lava flows from Elysium, a major volcano complex on Mars, suggests a heterogeneous mantle with layers melting at different temperatures, according to UPI.

Like its lava flows, Elysium is a unique geologic structure.

"Most of the volcanic features we look at on Mars are in the range of 3 to 4 billion years old," David Susko, a planetary scientist at Louisiana State University, said in a news release. "There are some patches of lava flows on Elysium that we estimate to be 3 to 4 million years old, so three orders of magnitude younger. In geologic timescales, 3 million years ago is like yesterday."

"Because thorium and potassium are radioactive, they are some of the most reliable geochemical signatures that we have on Mars," Susko said. "They act like beacons emitting their own gamma photons. These elements also often couple in volcanic settings on Earth."

Susko and his colleagues surveyed chemical signatures as well surface morphology in an attempt to explain Elysium's geochemical anomalies.

Researchers have previously suggested magmatic idiosyncrasies on Mars are the result of glacial activity, but the latest research suggests they are more likely the result of the evolution of complex magmatic conditions in Mars' mantle.

"We determined that while there might have been water in this area in the past, the geochemical properties in the top meter throughout this volcanic province are indicative of igneous processes," Susko said. "We think levels of thorium and potassium here were depleted over time because of volcanic eruptions over billions of years. The radioactive elements were the first to go in the early eruptions. We are seeing changes in the mantle chemistry over time."

Researchers published their findings in the journal Scientific Reports.

Changing magmatic conditions in long-lived volcanos is a well-studied phenomenon on Earth, but scientists have traditionally imagined Mars and its volcanoes as simple and lifeless -- more like the moon than Earth. Now, that's changing.

"The more we look at Mars, the less moon-like it becomes," Susko said. "We're discovering more variety in rock types and geochemical compositions."