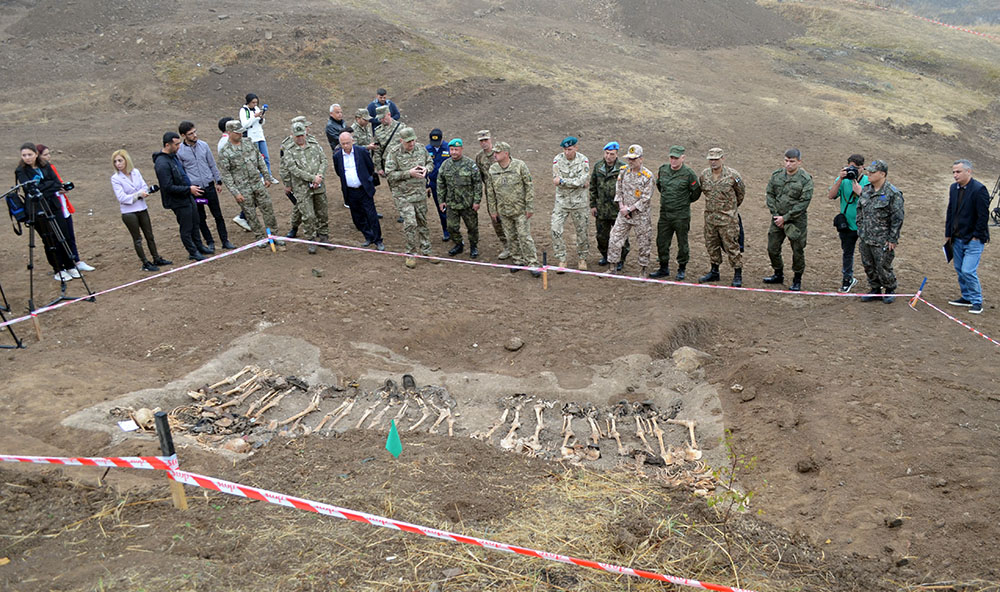 On October 6, with the organization of the Ministry of Defense and with the support of the State Commission on Prisoners of War, Hostages and Missing Persons, foreign countries’ military attachés accredited to the Republic of Azerbaijan visited a mass grave in the territory of the Edilli village of the Khojavand region, where the persons presumed to be servicemen of the Azerbaijan Army were buried, News.az reports citing Azerbaijan's Ministry of Defence.

Chief of the International Military Cooperation Department, Major General Huseyn Mahmudov, informed military representatives of foreign countries about gross violations of the norms and principles of international humanitarian law by Armenian military formations and the armed forces of the Republic of Armenia that illegally operated in the territory of the Republic of Azerbaijan during the First Karabakh War. Detailed information about the facts of the capture, torture, and murder of persons presumed to be servicemen of the Azerbaijan Army was provided.

It was noted that the 12 people’s remains were discovered in the grave. It was emphasized that the clothes and belongings on the skeletons are indicators of the fact that these skeletons are the remains of servicemen. It was also brought to the attention of the military attachés that the skeletons had their hands and legs tied with wire and rope.

Major General H. Mahmudov noted that nothing is yet known about the fate of up to 4000 civilians and prisoners of war missing as a result of the Armenian aggression.

Then the military attachés visited one of the military units and got acquainted with the conditions created for military personnel.