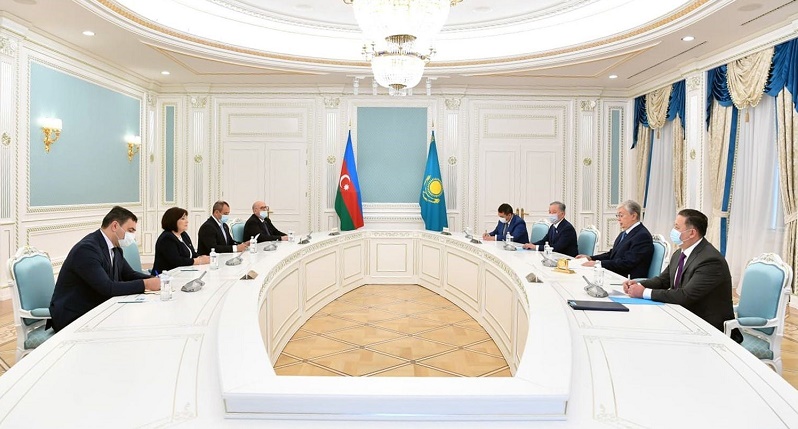 The chairman of the Parliament of Azerbaijan, Sahiba Gafarova, who is in Kazakhstan on an official visit, met with the country's president, Kassym-Jomart Tokayev, News.Az reports referring to parliament's press service.

President Tokayev welcomed Sahiba Gafarova and expressed satisfaction with the high level of bilateral relations and congratulated Azerbaijan on the victory in the second Karabakh war, noting the significant development of historical ties after the two states gained independence.

The relations developed by the Great Leader Heydar Aliyev and the First President of Kazakhstan Nursultan Nazarbayev are now successfully continued by the Heads of the two States, Tokayev said.

He asked to convey his greetings to Azerbaijani President Ilham Aliyev.

Sahiba Gafarova expressed gratitude for the greetings to President Ilham Aliyev and said that relations between Azerbaijan and Kazakhstan have reached a completely new level after the two states became independent.

Next year will mark the thirtieth anniversary of the establishment of diplomatic relations between the two countries, she added.

Bilateral relations are moving upward in the parliamentary dimension, and friendship groups operate in the legislative bodies of both countries, Gafarova said.

Azerbaijani and Kazakh MPs exchange visits and hold regular meetings under the influential international parliamentary organizations. This contributes to the development of bilateral relations, Gafarova noted, emphasizing the importance of cooperation within the TURKPA.