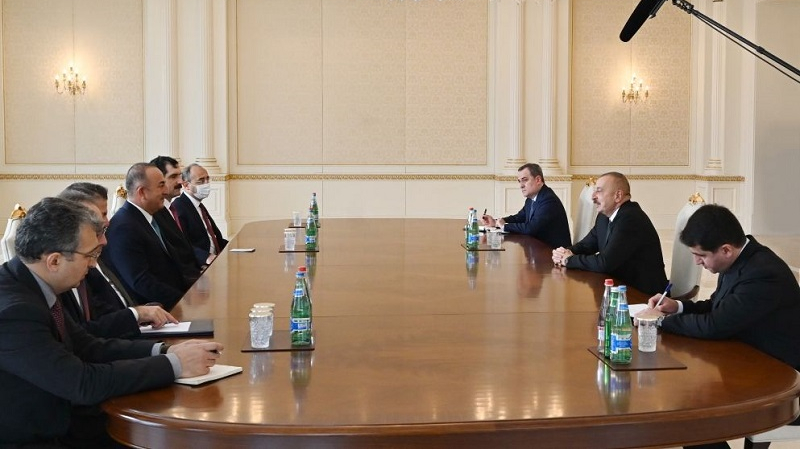 I am pleased to see you. Your visit once again demonstrates Turkish-Azerbaijani solidarity. Turkey has been with us since the first days and hours of the war. As my dear brother Mr. President has said, Turkey is always with Azerbaijan and Azerbaijan is not alone. This political and moral support continues to this day. Mr. President, the Speaker of the Turkish Grand National Assembly, you as Minister of Foreign Affairs, the Minister of Defense and other high-ranking officials have repeatedly supported Azerbaijan. This makes us, the people of Azerbaijan, very happy. This shows once again that we stand by each other at all times – both on good and difficult days. This political and moral support certainly inspires us, and we continue our just cause.

As you know, the operation continues successfully. To date, many villages, towns and settlements have been liberated from the occupiers, including the cities of Fuzuli, Jabrayil, Zangilan and Gubadli. In total, about 200 settlements have been liberated from the enemy, and this process continues. I report on the liberation of new cities and villages every week and hope that we will restore our territorial integrity.

I have repeatedly stated during this period that we want this issue to be resolved at the negotiating table. However, Armenia does not allow this to happen, has grossly violated the ceasefire declared three times, including the bombing of Ganja with ballistic missiles, then the bombing of the city of Barda, as a result of which we had numerous casualties. This once again shows the inhumane behavior of Armenia and demonstrates that they are not interested in peace. They want this occupation to last forever. They want to re-occupy the settlements our army has liberated. This is the main reason why this war continues. If Armenia gives up its ugly deeds, then a ceasefire will be ensured and the issue will be resolved at the table.

But I hope that this process will not take long. We have been waiting for 30 years. We want the issue of the withdrawal of Armenian armed forces from other occupied territories to be resolved at the negotiating table as soon as possible. Otherwise, we will continue to restore our territorial integrity by any means and, as I said, we will go to the end.

As a matter of fact, Armenia has already acknowledged defeat. As you know, the prime minister of Armenia recently sent a letter to Russian President Vladimir Putin. This letter is, in fact, an acknowledgement of defeat because Russia has been asked for military support although there is no legal basis for that. Azerbaijan is conducting its military operation on the territory of Azerbaijan, which is recognized by the international community. No operations are carried out on the territory of Armenia and we have no such plans. If we had had such plans, we could have done it in July this year. As you know, Armenia attacked us at the state border then and we drove Armenia out of our lands without crossing into its territory. Therefore, on the one hand, he admits defeat as this letter shows, but on the other, he does not want to give up completely. Today, the responsibility for the continuation of the war and losses on both sides lies squarely on Pashinyan and his ugly deeds. All responsibility lies on Armenia, and if it admits its defeat and leaves our lands, the most acceptable option is to resolve the issue at the negotiating table. In short, the solution to this problem is already happening. As I said earlier, Azerbaijan is implementing UN Security Council resolutions and has implemented most of the fundamental principles. I do hope that the rest of other fundamental principles will be implemented too and the territorial integrity of our country will be restored.

I would like to take this opportunity to thank all the Turkish people for the support Turkish citizens and our brothers have provided to us these days. They have sent me many letters, very sincere letters, and it touches all of us. At the same time, Turkish media representatives are putting their lives on the line day and night. The world sees and knows these images mostly through the Turkish media. Our brothers from Turkey were the first to come here after the cowardly bombing of Ganja and Barda. Therefore, it once again shows the Turkish-Azerbaijani unity. Every time I talk to my dear brother about this, we know that this unity is not in word but in deed, and the whole world knows it today. Welcome again!

- Thank you very much for receiving us, Mr. President.

I came here on the instructions of our President. You talk to him every day, at least twice a day, but he still sends you his greetings. Our President has instructed us not to leave brotherly Azerbaijan alone in this process, go to Baku on a regular basis and act together. Our Minister of Defense, other comrades and Binali Bey will also come, our Speaker is already here.

We are proud of your victories on the battlefield. You have shown the power of Turks to the whole world. We are very proud! Hopefully, we will return our ancient lands with these successful operations.

Our citizens are closely following the Karabakh issue and these ongoing operations, and we are always told to "support Azerbaijan more, do not leave it alone". There are many who say, "Send us to the front". I am sure that these words are also expressed in the letters you receive.

Everyone sees what Armenia is doing and that it violates the ceasefire every time. But there are many who do not want to say that, and we are aware of that. For this reason, we will continue to defend our cause by further strengthening our solidarity.