President Ilham Aliyev: We must return to Lachin, Zabukh and Susa 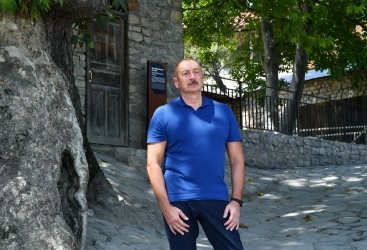 “We must return to Lachin, Zabukh and Susa. I have ordered the state refugee committee to contact the natives of Lachin city, Sus and Zabukh villages, so that we could return them to their native places in the near future,” said President of the Republic of Azerbaijan Ilham Aliyev as he was interviewed by the Azerbaijan Television in Basgal settlement, News.az reports.

Noting that Azerbaijan is committed to all its obligations, the head of state said: “We have taken this path and our other steps have been based on these commitments. We have acted on the basis of that. But Armenia is still engaged in provocations. They have to understand that marking time will not do them any good. If they think that something may change in their favor in a year or a year and a half, they are wrong. Things may change, but in our favor. Because the geopolitical situation in the world and in the region is obvious. You don't have to be a great politician to see that. Azerbaijan's power is growing, both military, economic and political, while Armenia's isolation, if it is possible to say so, is because they are wrong. They are doing the wrong thing. They have not yet given up their territorial claims against Azerbaijan. However, I told them directly and officially. Abandon your territorial claims. If you don't, then we can raise a territorial claim against Armenia too.”