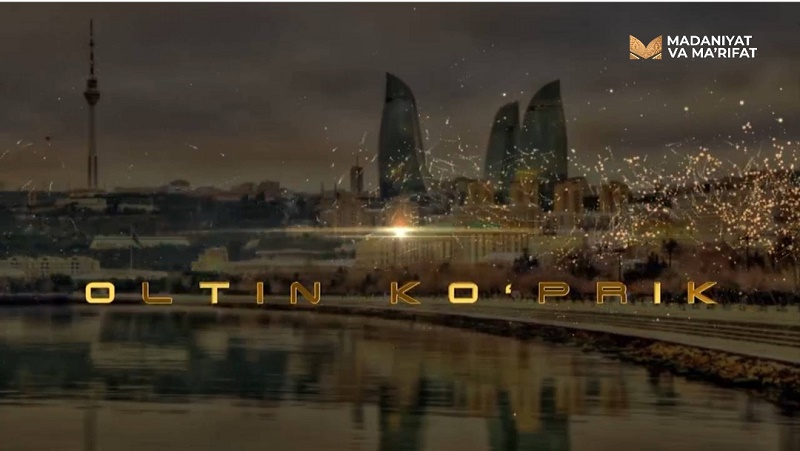 On August 26 of the current year, the program entitled “Oltin ko'prik: Ozarbayjon” (Golden Bridge: Azerbaijan) was broadcast on “Madaniyat va ma'rifat” TV channel of Uzbekistan within the framework of the project and the initiative advanced by the Center of Azerbaijani Culture named after Heydar Aliyev in Uzbekistan.

The program highlighted the historical bonds of friendship between our peoples sharing closely intertwined language, religion, culture, customs and traditions; the program also provided ample coverage of the shared values of Azerbaijan and Uzbekistan, the leading countries of the Turkic world.

The screened work expresses the views of the prominent personalities and scholars of both countries regarding our history and literature, as well as narrates about the numerous contributions of Nizami Ganjavi, Alisher Navoi, Muhammad Fuzuli, Boborahim Mashrab, Huseyn Javid, Gafur Gulyam to the development of our literary relations.

Gulbahor Ashurova, the associate professor at the Uzbek Language and Literature University named after Alisher Navoi in Tashkent and director of the Center named after Fuzuli, reported that President Ilham Aliyev declared 2021 as the year of “Nizami Ganjavi” and by the order of the President Shavkat Mirziyoyev, the 580th anniversary of the prominent poet of Uzbekistan Alisher Navoi will be widely celebrated in Uzbekistan; she also emphasized the contributions of these two distinguished figures in paving the path to our friendly and literary relations.

Samir Abbasov, the director of the Center of Azerbaijani Culture named after Heydar Aliyev in Uzbekistan, referred to the friendship and high level of cooperation between our countries. He emphasized the cultural and literary ties in the Middle Ages and the 20th century, the Decades of Literature and Art during the Soviet period, the cultural days, the work carried out in this direction during the years of independence as well as the reciprocal visits of heads of states and further development of cooperation.

Almaz Ulvi Binnatova, the professor at the Institute of Literature named after Nizami Ganjavi of the National Academy of Sciences of Azerbaijan, referred to the literary ties with Uzbekistan and the work carried out in this regard.

The activities undertaken by the Azerbaijan Center named after M. Fuzuli, established at the Uzbek Language and Literature University named after Alisher Navoi in Tashkent, received broad coverage in the program. The Center provides information regarding Azerbaijani and Uzbek literature, as well as the events and projects dedicated to our shared values.

The program included interviews with the renowned literary scholars of Uzbekistan: Mamatgul Hazratgulov, Islam Yagubov, Abdulla Ulugov, as well as the notable scholars of Azerbaijan: Pasha Karimov, Akif Azalp, Umid Mirzoev and other figures from the literary world.