Russian FM Lavrov, US State Secretary Tillerson agree on date of next meeting 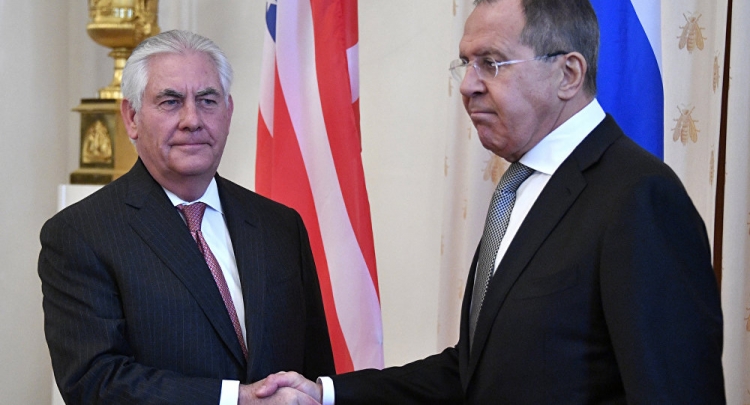 Russian Minister of Foreign Affairs Sergei Lavrov held phone talks with the US Secretary of State Rex Tillerson, agreeing on the date of their next meeting in May, the Russian Foreign Ministry said Monday, APA reports quoting sputniknews.

The two diplomats have agreed to meet on the sidelines of the ministerial Arctic Council talks on May 10-11.

Over the phone, Lavrov discussed with Tillerson the upcoming Astana talks on Syria, as well as some issues of bilateral relations, Russian Foreign Ministry revealed in a statement.

"Certain issues of bilateral relations were discussed. The schedule of the upcoming Russian-American contacts [was discussed as well], in particular, the meeting on the sidelines of the ministerial Arctic Council talks in Fairbanks (US) was confirmed to be held on May 10-11. The heads of foreign services also exchanged opinions on the Astana international talks on Syria which is to be held on May 3-4," the statement said.

US Secretary of State Rex Tillerson and Russian Foreign Minister Sergei Lavrov held bilateral discussions in Moscow on April 12. The sides dealt with a number of issues on the bilateral agenda, including Syria, shortly after a surprise US strike on Syrian army facilities that resulted in Russia suspending its air safety memorandum with Washington.

Shortly after Tillerson's visit, Russia restored its 2015 memorandum of understanding on Syrian air operations with the United States at Tillerson's request.