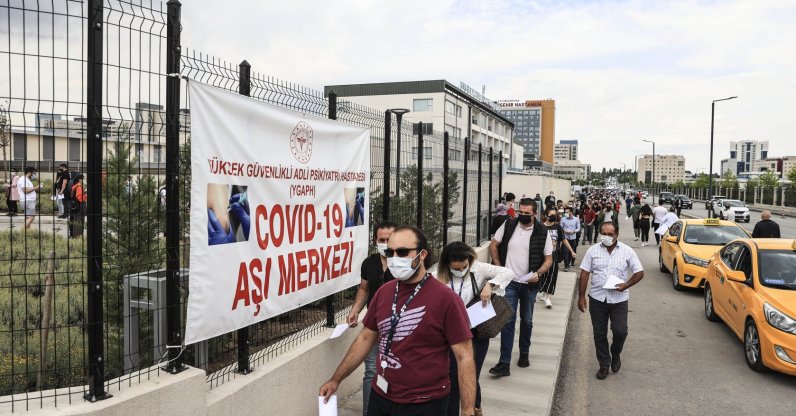 Turkey administered over 1.46 million shots of COVID-19 vaccines in the last 24 hours, according to official figures released Thursday.

Over 38.74 million doses of coronavirus vaccines have been administered since the country launched a mass vaccination campaign in mid-January.

More than 24.59 million people have received their first doses, while over 14.14 million have been fully vaccinated, showed the Health Ministry count.

The country uses an inactive vaccine developed by China’s Sinovac as well as Pfizer-BioNTech’s Messenger RNA (mRNA) vaccine. A deal was also made with Russia for imports of the Sputnik V vaccine and locally made vaccines are expected to be available later this year.

"Next week we will inoculate volunteers with a Turkish-developed COVID-19 vaccine," Koca said in a live press conference recently.

"This is the last phase in its development as it has entered the human trials phase," he added.

Koca also noted that studies are currently being carried out to determine which vaccines can be mixed if scientific research proves that a third dose is necessary.

Administering over nearly 39 million doses in less than six months is no small feat for a country of more than 83 million people. Turkey once ranked sixth in the world in coronavirus vaccination but the drive slowed down due to delays in the shipment of vaccines. Vaccine hesitancy among the public also hurts the process.

This month, more Pfizer-BioNTech vaccines are set to arrive in the country. Authorities seek to promote vaccination among the wider masses and are considering bringing in restrictions for those who do not get their jabs, though inoculation is not mandatory in the country.

It also confirmed 5,904 new coronavirus cases, including 509 symptomatic patients, across the country in the last 24 hours. The number of new cases was 6,221 Wednesday.

Turkey's overall case tally is now over 5.35 million, while the nationwide death toll has reached 49,012 with 62 new fatalities.

As many as 4,143 more patients won the battle against the virus, raising the total number of recoveries past 5.21 million.

Over 57.89 million coronavirus tests have been done to date.

The latest figures put the number of COVID-19 patients in critical condition at 860.