Turkish President: I am very pleased to be with you on Azerbaijan’s Independence Day 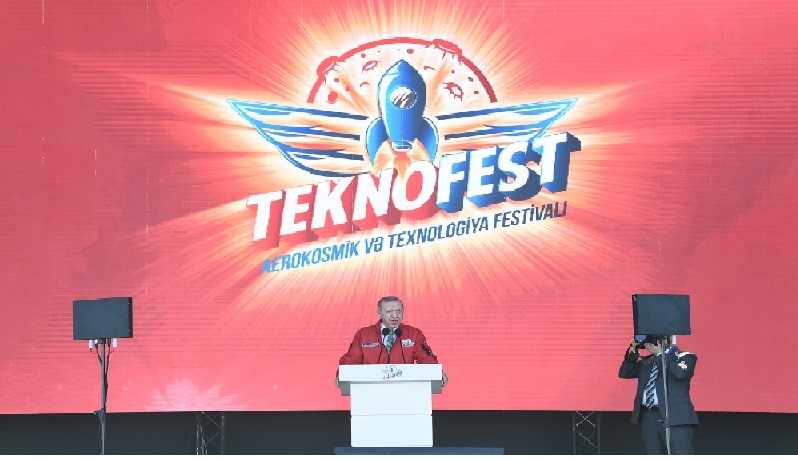 “I am very pleased to be with you on Azerbaijan’s Independence Day. As a child of a nation that knows very well how independence was achieved and how valuable it is, I sincerely congratulate you on your Independence Day. I remember with gratitude and respect our heroes who crowned our glorious struggles for independence and the future with their martyrdom,” said Turkish President Recep Tayyip Erdogan in his speech at the TEKNOFEST Azerbaijan festival in Baku, News.az reports.

“In the person of my dear brother Ilham Aliyev, I thank the noble people of Azerbaijan for their sincere hospitality.

We are holding the world's most prestigious aviation, space and technology festival, TEKNOFEST under the slogan “One nation, two states, one festival” in Baku, the pearl of the Caspian Sea. On behalf of myself and my nation, I personally thank our dear scientist Aziz Sancar for sharing in our joy on this proud day. Greetings from Badi-Kuba, i.e. from the beautiful city of winds Baku to every inch of the lands where the Caucasian Islamic Army under the command of Nuru Pasha fought alongside our Azerbaijani brothers, to the lowlands where Natavan's ghazal was heard, to the lands where our martyr Khudayar sang, to Ganja, Shusha, Fuzuli, Lachin and all the regions of Azerbaijan. I send you my love from here. May Allah make our brotherhood, which it is once again demonstrated here today, eternal and permanent,” Recep Tayyip Erdogan emphasized.