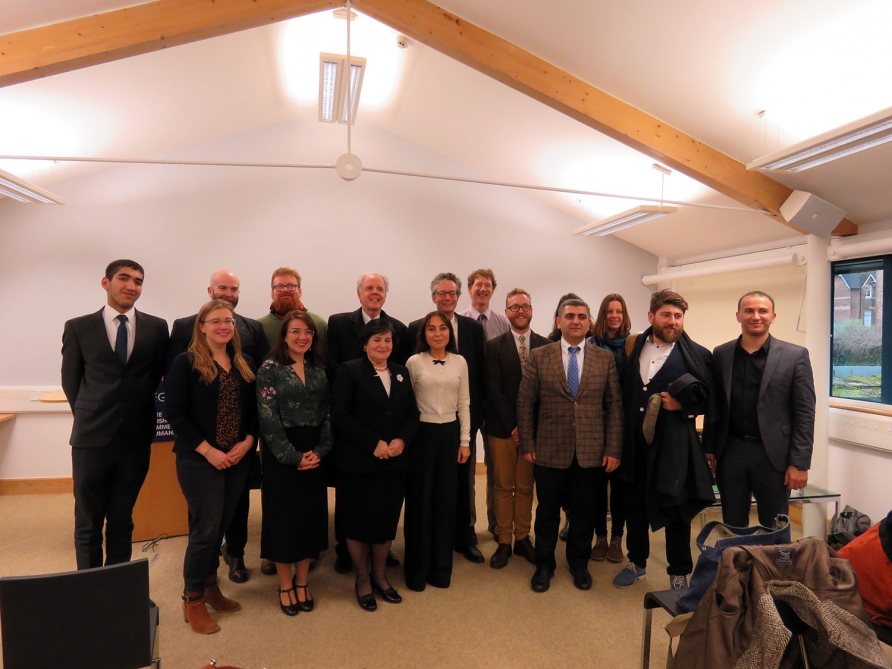 A colloquium on the archaeology of the medieval city of Barda of Azerbaijan has been held at the Ertegun House of the University of Oxford, AzerTag reports.

Archaeological Exploration of the Barda Project (AEB) is one of the most important scientific initiatives of the Nizami Ganjavi Center, which was established in 2013 with the aim of studying history, languages, and cultures of Azerbaijan, the Caucasus, and Central Asia.

Prior to the colloquium, the Ertegun House hosted a lecture by SOAS University professor, representative of the Department of the History of Art and Archaeology of the University of Oxford Khalili Research Centre Scott Redford. Held under the theme "The South Caucasus in the Middle Ages (XI-XIII centuries)", the lecture was followed by four scientific sessions featuring speeches by the participants of the Barda archaeological expedition.

Welcoming the participants, Dean of the Oriental Institute of the University of Oxford, Professor of Tibetan and Himalayan Studies Ulrike Roesler, Rector of the Baku branch of the Moscow State University after Lomonosov (MSU), vice-president of Azerbaijan National Academy of Sciences (ANAS), Board member of the Nizami Ganjavi Scientific Center of the University of Oxford,(www.orinst.ox.ac.uk/nizami-ganjavi-programme-study-languages-and-cultures-azerbaijan-and-Qafqaz), academician Nargiz Pashayeva declared the event open.

In her remarks, Professor Nargiz Pashayeva expressed confidence that the colloquium on archaeological excavations in Barda would be interesting and fruitful. She said that the scientific discussions to be held during the event would make a valuable contribution to the study of the Caucasus and help fill in certain knowledge gaps in this area.

Professor Nargiz Pashayeva thanked all her colleagues who contributed to the successful delivery of the project, especially Professor Edmund Herzig and doctor Paul Wordsworth.

Then, the famous scientists involved in the archaeological investigations in the city of Barda spoke about the excavations conducted in the area.

The first session featured a lecture by Professor of the Institute of Oriental Studies at the University of Oxford Edmund Herzig entitled "Writing the medieval history of Azerbaijan” on the history and historiography of Barda and Arran.

Director of the National Museum of History of Azerbaijan, Doctor of Historical Sciences, academician Naila Valikhanli presented her report on "Archaeology of the Middle Ages in Azerbaijan".

The second session was held under the theme “Archaeological approach to the study of Barda city and landscapes of medieval cities in Azerbaijan”. The participants heard reports by head of Barda Archaeological Exploration Group, Research Fellow at the Brasenose College of the University of Oxford Paul Wordsworth on "Barda city landscape, 600-1200", expert on Central Asian, Islamic and Caucasian archaeology, representative of the School of Archaeology at the University of Oxford Katie Campbell on "The Mongols in the Caucasus cities", Georgian archaeologist and employee of Tbilisi State University David Naskidashvili on archaeological excavations of the Medieval Caucasus.

The third session of the colloquium entitled "Bioarchaeological evidence from Barda" featured three speakers. Zooarcheologist, a specialist in geometric morphometrics of Exeter University, Honorary Research Fellow at the Martin Luther University of Halle-Wittenburg Ashleigh Haruda presented a report on “Nutrition and Economy of Medieval Barda". The session also heard reports by expert on Roman North Africa Studies and landscape archaeology, representing the Department of Classical Studies of the University of Michigan David Stone on "Archaeobotanical remains found in the city" and employee of the Institute for Ancient World Studies at the University of New York Dr. Selin Nugent on the information about people living in and around Barda – Karatapa area.

The Archaeological Exploration of Barda Project (AEB) aims to chart the development of the Late Antique and the medieval city of Barda, a provincial capital between the 5th and the 11th centuries CE.

The first archaeological reconnaissance and excavation fieldwork of the Archaeological Exploration of the Barda project got underway in September 2015.