Another Munich fake of Pashinyan? 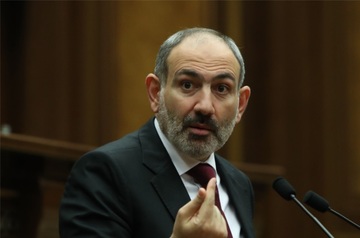 News.Az reprints from Vestnik Kavkaza an article titled "Another Munich fake of Pashinyan?" by Andrei Uglanov.

Yesterday, the Prime Minister of Armenia Nikol Pashinyan held a meeting with the security forces, during which the resonant events of the last weeks in the army were discussed, where since the beginning of the year non-combat losses amounted to 13 people. The last case of a soldier’s death occurred on February 14 in the “NKR” unrecognized “Defense Army”, where 23-year-old contract soldier Hayk Asryan was mortally wounded in the head. A criminal case has been opened.

Secretary of the Security Council Artur Grigoryan, Minister of Defense David Tonoyan, head of the General Staff of the Armed Forces Artak Davtyan, acting directors of the National Security Service Eduard Martirosyan, prosecutor general Arthur Davtyan, chairman of the Investigative Committee Hayk Grigoryan and other representatives of law enforcement agencies whom Pashinyan urged to fight against criminal subculture in the army.

Meanwhile, something is wrong with the statistics of deaths in the Armenian army.

So, last Saturday, during a meeting between the President of Azerbaijan and the Prime Minister of Armenia, held on the sidelines of the Munich Security Conference in the presence of journalists, Ilham Aliyev asked Nikol Pashinin a question about “how he relates to what happened today on the contact line when was an Azerbaijani soldier killed by an Armenian sniper?

The Armenian prime minister replied literally the following: "President Aliyev said that today an Azerbaijani soldier has been killed, I will say that today on the border of the Gazakh region, [on the border] of Armenia and Azerbaijan, an Armenian soldier was wounded by Azerbaijani snipers."

However, Vestnik Kavkaza did not manage to find confirmation of information about the tragic incident of February 15 on the border of the Gazakh region in the Russian-language segment of the Armenian media, although usually such reports are received quite quickly. This immediately raises several assumptions about the essence of the statement by Nikol Pashinyan.

The first one. It was a spontaneous counterargument to Aliyev’s statement from the series "Azerbaijanis also kill Armenians."

The second one. Will the Armenian Defense Ministry misinform his prime minister or, even worse, did Pashinyan disclose secret information in the heat of the dispute, knowing the facts that are hidden from the public? This version confirms reports that on the background of tension on the contact line in the Gazakh region, the Armenian side is trying to hide its losses.

The third. The number of deaths in the Armenian army recently really exceeded all conceivable indicators, which is confirmed by yesterday's meeting at Pashinyan. See also "Vestnik Kavkaza" "Hazing: the Armenian army is dangerous for Armenia itself." The stable situation in the army, in theory, should inspire public confidence in the inviolability of the Armenian position in the unsettled Karabakh conflict, and when young children die at the hands of their brothers in arms or lay hands on themselves, what stability is there ?! In such a situation, isn’t it easier to write off non-combat losses to snipers deployed on the other side of the border?