Armenia: Heroism in the Face of Terrorism 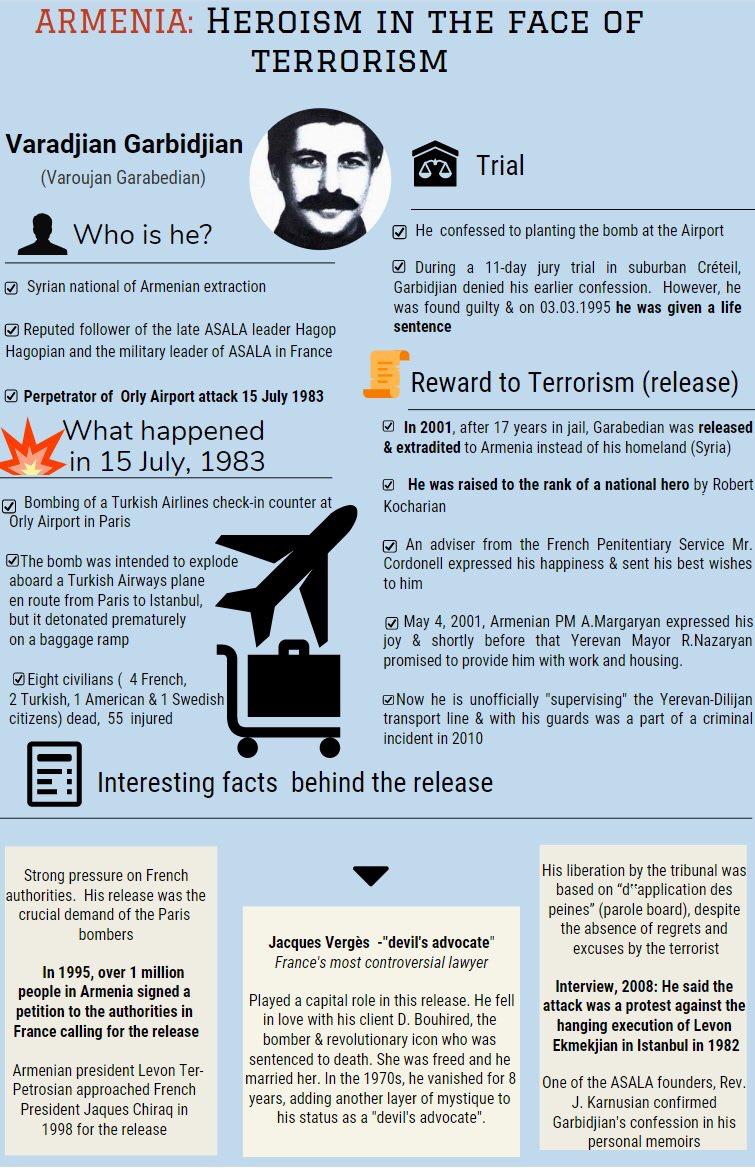 Varadjian Garbidjian (also known as Varoujan Garabedian), a Syrian national of Armenian extraction, was a reputed follower of the late ASALA leader Hagop Hagopian and the military leader of ASALA in France.

He was known for perpetrated the 1983 fatal bombing at Orly Airport in Paris. On 15 July 1983, Garbidjian planted a bomb aboard a Turkish Airlines plane en route from Paris to Istanbul. The bomb was intended to explode aboard the plane, but it detonated prematurely on a baggage ramp, claiming the lives of 8 civilians (4 French, 2 Turkish, 1 American and 1 Swedish citizens) and leaving 55 people injured. Garbidjian confessed to planting the bomb at the airport. He was found guilty and sentenced to life on March 3, 1995.

In 2001, after 17 years in jail, Garbidjian was released and extradited to Armenia instead of his homeland (Syria).

On 4 May 2001, Armenian Prime Minister A. Margaryan expressed his joy and shortly before that Yerevan Mayor R. Nazaryan promised to provide the terrorist with work and housing.

Interesting facts behind the release

- In 1995, over a million people in Armenia signed a petition to the French authorities, calling for the release of Garbidjian.

- Jacques Vergès, known as ‘devil’s advocate,’ played a crucial role in this release. He fell in love with his client D. Bouhired, the bomber and revolutionary icon who was sentenced to death. She was freed and he married her. In the 1970s, he vanished for 8 years, adding another layer of mystique to his status as a ‘devil’s advocate.’

- His liberation by the tribunal was based on d'application des peines (parole board) despite the absence of regrets and excuses by the terrorist.

- Interview, 2008: He said the attack was a protest against the hanging execution of Levon Ekmekjian in Istanbul in 1982.

- One of the ASALA founders, Rev. J. Kamusian confirmed Garbidjian’s confession in his personal memories.