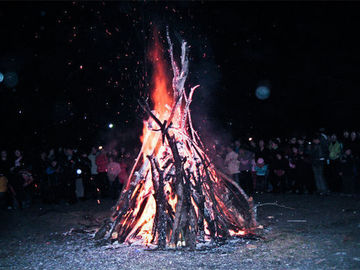 The Last Tuesday of Novruz, is celebrated by making a bonfire and everyone regardless of his/her age and sex should jump over the blessed fire at least seven times. Seven times jumping over the same bonfire or one time over seven bonfires.

This Tuesday evening is considered as the most festive with candles on the table, dishes cooked and sweets prepared. The decoration of the festive table is khoncha, a big tray with "samani" -- freshly sprouted wheat and a symbol of hope for an abundant harvest in the coming year.