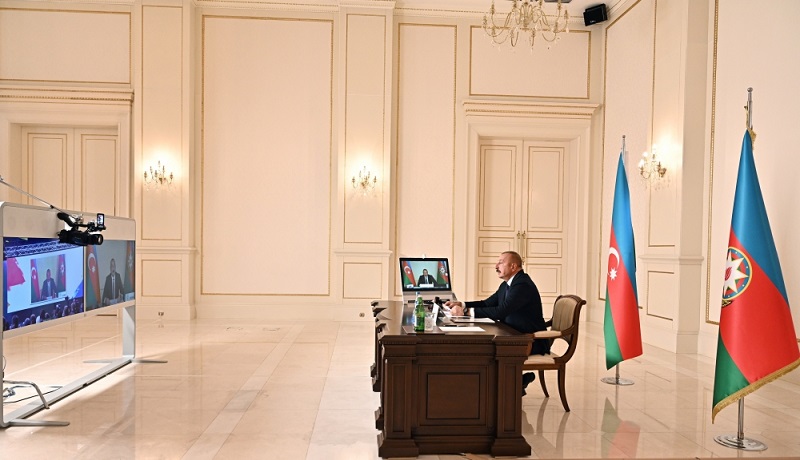 Azerbaijan conducts fully independent domestic and foreign policy, and effectively neutralizes all attempts of foreign interference into its internal affairs, President Ilham Aliyev said as he addressed the High-Level Commemorative Meeting of the Non-Aligned Movement in a video format, News.Az reports.

The High-Level Commemorative Meeting to mark the 60th Anniversary of the NAM has today kicked off in Belgrade, the capital city of Serbia.

The head of state reminded that as the world was hit by the COVID-19 pandemic in early 2020, Azerbaijan took its role as the chair of the Movement responsibly and undertook serious efforts to ensure the Movement’s adequate and timely response to the challenges caused by the pandemic.

He pointed out that Azerbaijan put forward a number of initiatives to consolidate global efforts against the pandemic.

“We initiated and held the NAM Online Summit at the level of Heads of State and Government in May 2020. As a practical outcome of the Summit, a database encompassing the basic humanitarian and medical needs of NAM Member States was created, and the World Health Organization uses the database as a reference point for identifying the existing needs of NAM Member States in addressing the pandemic,” the president said.

“Further to my suggestion at the recent Summit, which was later supported by more than 150 UN Member States, the Special Session of the UN General Assembly in response to coronavirus at the level of the Heads of State and Government was held in December 2020,” President Aliyev added.

The head of state emphasized that Azerbaijan also made voluntary financial contributions to the World Health Organization in the amount of $10 million, half of which was direct assistance to the NAM Member States.

“Furthermore, we provided direct financial and humanitarian assistance to more than 30 countries, including NAM members, to support their fight against the coronavirus. More than 150 000 doses of the COVID-19 vaccine have been donated by Azerbaijan to 4 countries free of charge,” he concluded.