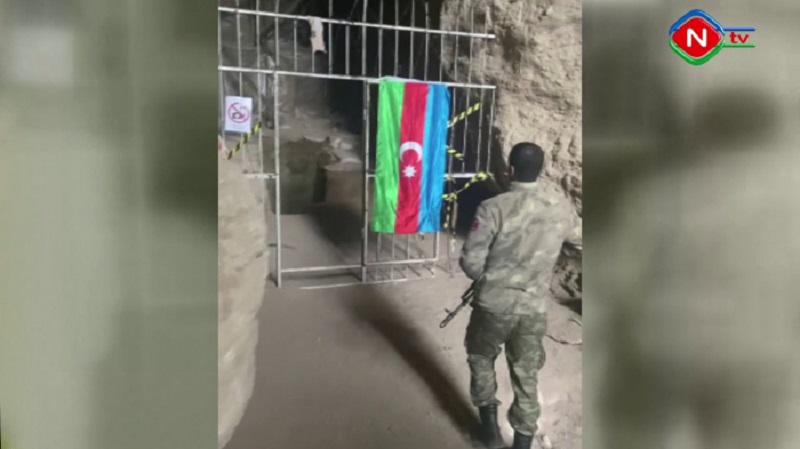 Azerbaijani servicemen shared another video from the territories liberated from the Armenian occupation.

This time, the servicemen distributed video footage from the Azykh Cave. Commenting on the video, the servicemen say that the Armenians were carrying out "repair work" in the cave.

The cave, which is one of the world's oldest sites, is located 14 km north-west of the city of Fuzuli, near the village of Azykh, on the left bank of the Guruchay River, at an altitude of 900 meters from sea level. The area of the Azykh Cave is 800 sq. km.

Azerbaijani scientists began the study of the Azykh Cave back in 1960. In 1968, during archaeological excavations, the Azerbaijani archaeologist Mammadali Huseynov discovered a caveman's site here. The find consisted in the discovery of a part of the jaw bone of a caveman who lived in the Acheulean period. In the course of the research, it turned out that the azykhantropus lived here 350,000-400,000 years ago. During the excavations, a cultural layer 10-14 meters thick was discovered. More than 3,000 stone tools and more than 30,000 fossilized animal bones were found there.

Azykh Cave is the only multi-layered monument dating back to the anthropogenous era. The Azykh discoveries once again prove that people began to live on the territory of Azerbaijan 1.5 million years ago.

Since 1993, the territory on which the Azykh Cave is located was under Armenian occupation.