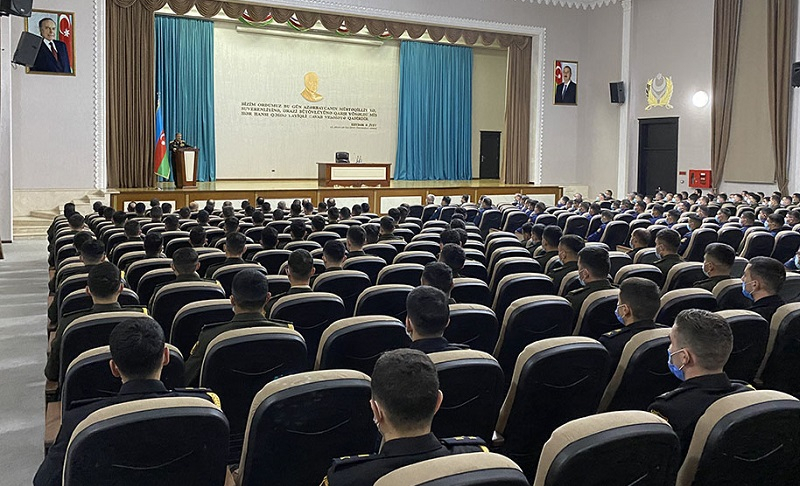 First, flowers were laid at the monument to national leader Heydar Aliyev in the school area and the memory of the Great Leader was honored.

Then a meeting with the officers and cadets of the school, as well as professors and teachers was held at the Academy’s club.

At the beginning of the event, the memory of national leader Heydar Aliyev, as well as Shehids (Martyrs), who sacrificed their lives for the independence and territorial integrity of Motherland, was honored with observing a minute of silence. The National Anthem of the Republic of Azerbaijan was performed.

Minister Hasanov brought to the attention of the personnel the historical significance of the Victory gained in the Patriotic War under the command of President of Azerbaijan, Supreme Commander-in-Chief of the Armed Forces Ilham Aliyev. It was emphasized that the moral and political support of fraternal Turkey played an important role during the war.

Congratulating the military personnel on the beginning of the new training year, the minister stressed that he highly appreciates the heroism and courage shown by the Military Academy's graduates during the Patriotic War.

He noted that the personnel reforms carried out in the Azerbaijan Army using new technologies play a significant role in strengthening the army.

It was noted that bringing the military specialists training program at the Military Academy in line with the programs applied at the military schools of the National Defense University of the Turkish Republic is one of the significant steps aimed at training professional officers in the Azerbaijan Army.

Hasanov enquired about the cadets' concerns and wished them success in their studies and further service.

In the end, the defense minister gave relevant instructions on the organization of the military education system at a higher level.