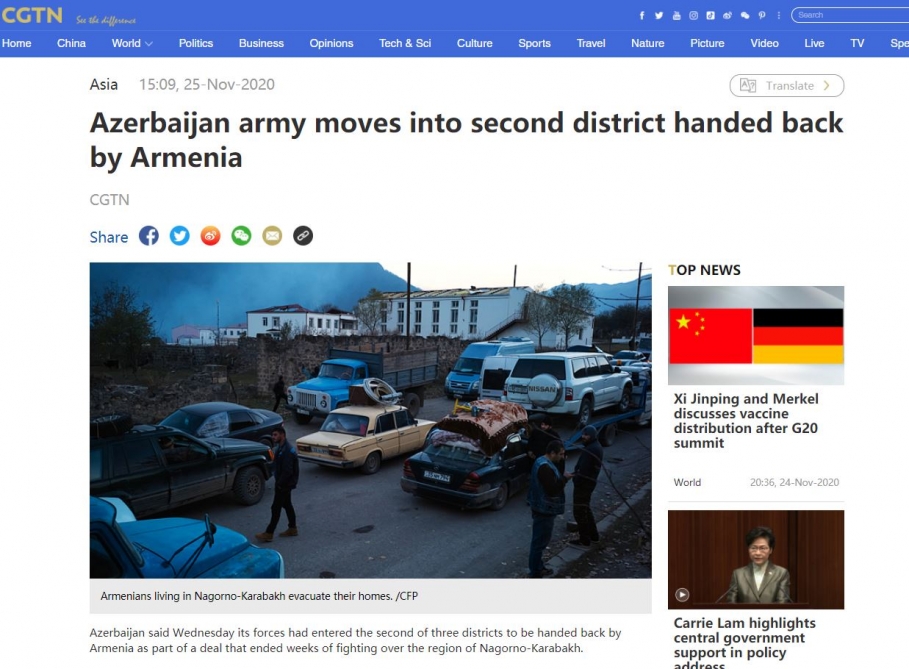 The website of the English language China Global Television Network (CGTN), operated by the China Central Television (CCTV), has published an article highlighting the liberation of Azerbaijan’s Kalbajar district.

The article says: “Azerbaijan said Wednesday its forces had entered the second of three districts to be handed back by Armenia as part of a deal that ended weeks of fighting over the region of Nagorno-Karabakh.

The defense ministry in Baku said in a statement that "units of the Azerbaijani army entered the Kalbajar region on November 25" under the deal signed earlier this month by Armenia, Azerbaijan and Russia.

Kalbajar was initially scheduled for handover on November 15 but the deadline was postponed by Azerbaijan for humanitarian reasons.

"Engineering work has been completed to ensure the movement of our units in this direction, the difficult mountain roads along the route of the troops' movement are being cleared of mines and prepared for use," the ministry statement said.

Armenia agreed to hand over three districts around Karabakh - Aghdam, Kalbajar and Lachin - as part of the deal that stopped an Azerbaijani offensive that had reclaimed swathes of territory lost to Armenian separatists during a war in 1990s.

Aghdam was ceded on November 20 and Lachin is to be handed over by December 1.”