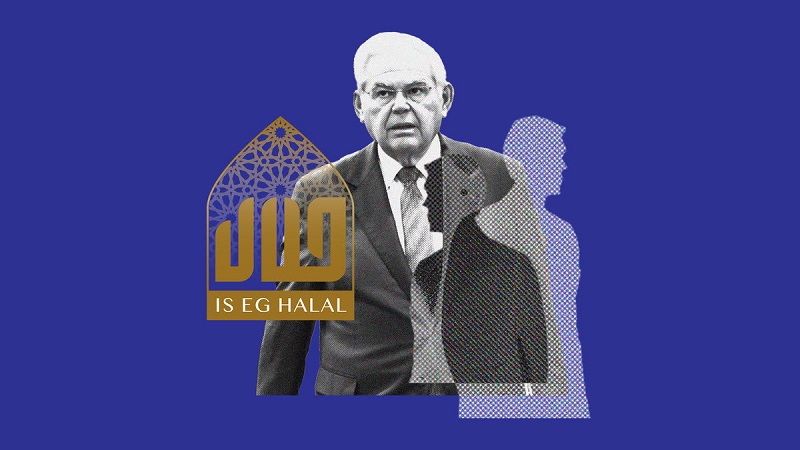 The Daily Beast, an American news website, has published an article entitled “Company in Probe of Dem Senator Bob Menendez Tied to His Crooked Donors”.

News.Az republishes the article by researcher Will Bredderman.

The shadowy globe-spanning company at the heart of the latest federal investigation into Sen. Bob Menendez has ties to two of the Democrat’s financial backers, both power players on the state’s cash-washed northern waterfront—and both recently busted by the feds in separate schemes involving bank fraud and organized crime.

Multiple outlets have reported that the latest Department of Justice probe into Menendez, who chairs the powerful Committee on Foreign Relations, revolves around a mysterious company called IS EG Halal, based in the senator’s home state of New Jersey.

In 2019, the Egyptian government awarded the U.S. firm exclusive rights to handle halal certification for its meat imports—giving the previously unknown enterprise a hammerlock on the supply chain of a country of more than 100 million people.

The Wall Street Journal reported last month that the feds have taken a particular interest in IS EG Halal co-founder Antranig Aslanian, an attorney the paper reported may have ties to Menendez’s wife. Aslanian declined to comment for this story, and IS EG did not respond to repeated outreach by The Daily Beast.

But a review by The Daily Beast of public records and of local and international news reporting revealed that IS EG’s relationships stretch much farther, and touch far shadier characters and locales, than previously understood. These materials link the company not just to the Egyptian government but to a pair of New Jersey businessmen entwined with Menendez and the senator’s allies in the state’s notoriously powerful local political machines: Fred Daibes and Gazmend “Gus” Lita, who have made careers catering to the affluent professionals who have flooded a part of the Garden State once known mostly for its rotting piers and Superfund sites.

As it happens, both entrepreneurs copped to federal crimes earlier this year.

The documents The Daily Beast reviewed do not implicate Menendez, long the beneficiary of political contributions from both men, from their families, and from their associates. The senator’s team declined to comment on the new scrutiny from the Justice Department, and his campaign—using a U.S. Senate email account—said he does not presently intend to refund gifts from either confessed criminal.

Binding all of the threads together is a glass office complex hunkered along the Hudson at 125 River Road, in the Borough of Edgewater—a part of the state called “Gold Coast” for its view of and access to Manhattan. Visiting in-person, The Daily Beast found a maroon awning over the doorway to IS EG’s office that listed not only its name but that of Medi Trade EG, a long-established but enigmatic Egyptian food importer.

A 2019 article in the independent Egyptian outlet Mada Masr uncovered extensive business ties between IS EG and Medi Trade, and provided some insights into how and even why the then-two-year-old New Jersey firm secured a monopoly on halal certification for the Middle Eastern giant. Among other points, Mada Masr revealed that Medi Trade’s New Jersey branch was incorporated by Aslanian’s law partner, and that statements by the company’s executives indicate Medi Trade is likely state-owned or state-controlled. The Daily Beast’s own translations of these statements uphold this assessment.

Medi Trade did not respond to repeated requests for comment, but Mada Masr and The Daily Beast are not alone in reaching this conclusion: in a 2013 article, Reuters referred to Medi Trade as a “state commodity enterprise.” Further, Bloomberg has reported that Medi Trade purchases foodstuffs on behalf of the Egyptian government.

Corporate records show that the office building housing the new import firms belongs to Daibes Enterprises—and numerous Daibes entities use the exact same suite that IS EG lists on its website and in materials filed with the U.S. Department of Agriculture: suite 301.

The Daibes clan have donated more than $400,000 to assorted state-level candidates, according to New Jersey campaign finance records. Meanwhile Federal Election Commission filings reveal they have contributed upwards of $200,000 to federal officials—including tens of thousands to Menendez and his committees.

Additionally, a review of FEC records indicates that numerous individuals with business or family ties to the Daibes organization, including IS EG co-founder Aslanian, have kicked in similar amounts to Menendez’s committees on the exact same day, suggesting a coordinated effort.

The patriarch of the development dynasty, Fred Daibes, is famous for his power over Edgewater, as well as for his collection of flashy cars—and for confessing earlier this year to submitting false materials to a bank he co-founded in order to obtain a $1.8 million loan. A lawyer for the builder denied his client has ever bundled contributions for Menendez, and maintained he has refrained from further criminal adventures.

“Fred Daibes denies any wrongdoing whatsoever other than the single charge to which he pleaded guilty,” attorney Lawrence Lustberg wrote in a statement to The Daily Beast.

Lustberg added that Daibes “has absolutely nothing to do with the day-to-day affairs of” IS EG, but did not elaborate on his relationship with the company, except to indicate IS EG has used space at other properties the developer controls.

Lustberg also stated that Daibes has retained another attorney to represent him in the federal probe into Menendez and IS EG, and referred further questions about the developer’s ties to the parties involved and his interactions with investigators to the new counsel. That lawyer, however, declined to comment for this piece.

Incorporation records, and the site visit, show that IS EG uses a specific sub-suite at 125 River Road: 301a, which has its own mailbox and entrance. It is unclear whether this space is fully separate or connected with the Daibes offices on the third floor. 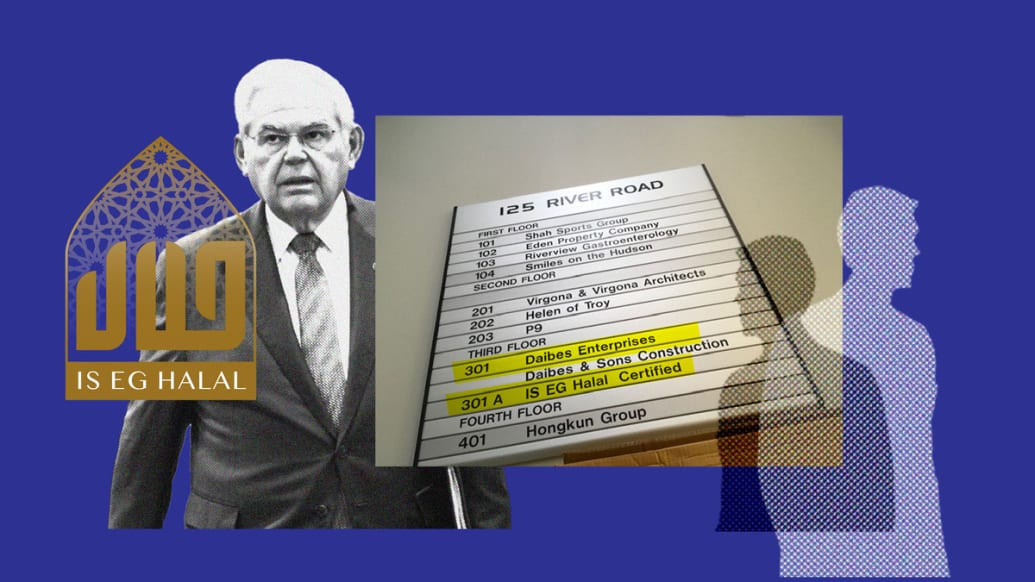 Nonetheless, the links between IS EG and the Daibes companies run even deeper.

The latest incorporation documents for IS EG, which place it in sub-suite 301a, were filed by an attorney named Denise Travers. Travers was long married to Daibes Enterprises general counsel Robert Travers—and a 2017 federal civil suit suggested she, in her position as attorney for Edgewater’s zoning board, was part of a concerted effort by local officials to prevent developers other than Daibes from building in the area. Edgewater denied these allegations, but ultimately settled the matter out of court. Neither Denise nor Robert Travers responded to requests for comment. Edgewater hired Robert Travers as its attorney earlier this year, public records show.

Lustberg noted that Daibes was not a party to this lawsuit, and asserted that Robert and Denise Travers have since divorced.

But there are other connections still. One of the other entities incorporated at sub-suite 301a of 125 River Road is 214 High Mountain Road LLC. The name of this entity matches an address of a Daibes-owned property in North Haledon, New Jersey.

The names on the documents are those of Gazmend Lita and his wife.

Lita, a construction company owner and restaurateur, is another Menendez donor and frequent business partner to Daibes Enterprises in both the hospitality and building sectors.

He is also, by his own admission in a February plea deal with the Department of Justice, the founder of an Albanian-American “social club” that functioned as an illegal gambling den operated by a racketeering and shakedown outfit the feds call “the Diamond Enterprise.” Although not a formal member of the “Enterprise,” Lita confessed to establishing the club at its request and to taking a cut of its illicit profits.

What’s more, Lita is directly tied to IS EG Halal. The database OpenCorporates identifies Lita as a director of IS EG’s India branch, as do multiple other services tracking business records in the Southeast Asian nation. Lita remains registered in the Indian Ministry of Corporate Affairs’ database of company directors, though he is no longer associated with any firm.

Meanwhile, a sentencing memo Lita’s lawyer filed after his guilty plea noted that his client had “no choice but to resign from his most recent position as a halal food inspector” during the trial, due to the extensive international travel the role required—though the attorney added that Lita hoped to resume the job soon.

Both Lita and his counsel refused to speak to The Daily Beast when contacted. But U.S. public records show India is not the only foreign government with which he has interacted.

Lita is also the agent of 4 Jersey Street Associates LLC, yet another entity based out of sub-suite 301a at 125 River Road. Public records show that in early 2021, while under federal indictment for the gambling charge, Lita not only incorporated this company but used it to purchase the titular address in the Borough of East Rutherford from the Egyptian Defense Ministry. 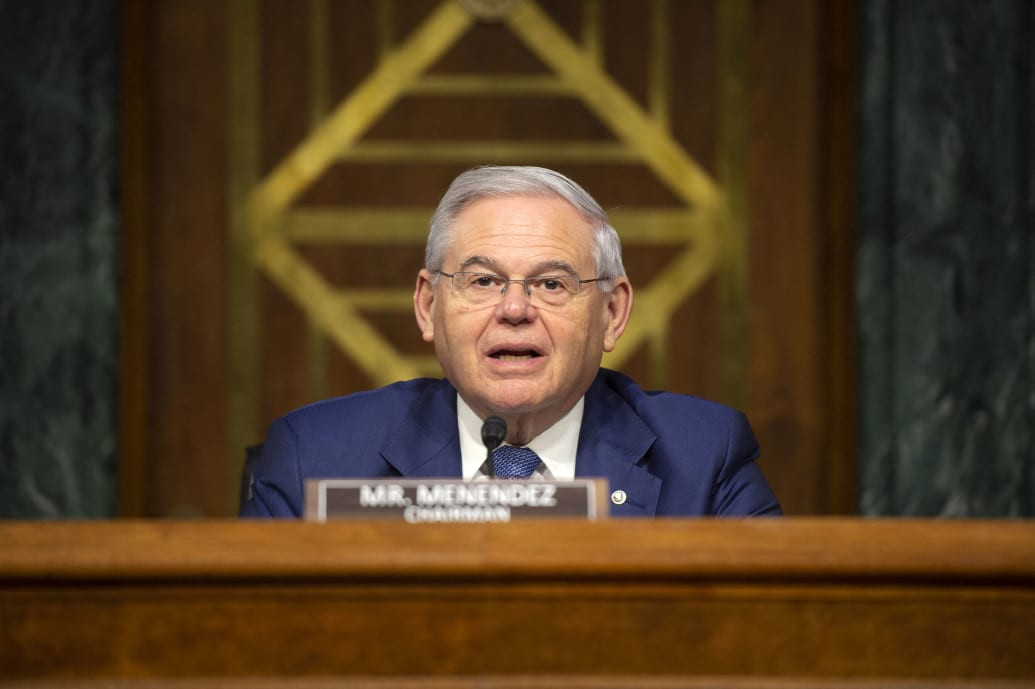 Two attorneys’ names appear on the deed of sale: one is Antranig Aslanian, the IS EG co-founder; the other is Daibes general counsel Robert Travers.

Local news reports, along with materials The Daily Beast obtained from East Rutherford, document that Aslanian represented the Egyptian government in its failed bid to get local approval to convert the property into a United Nations annex and housing for military personnel.

East Rutherford tax records show that the borough continues to send tax bills for the site to 125 River Road, 301a: that is, to the IS EG and Medi Trade offices. Further, paperwork Lita signed and filed with the East Rutherford Buildings Department showed he used this exact address, down to the sub-suite, in handwritten materials seeking a certificate of occupancy for the property. Lita also listed the 301a address on development plans for the secured property he used for his bail in the federal criminal trial—leaving no room for doubt as to his use of the IS EG office space.

Less clear is what stake, if any, Daibes and Travers had in the East Rutherford transaction with the Egyptian armed forces. A source familiar with the sale described Travers as somebody who “represents Daibes and represents people who know Daibes,” and was familiar with Lita primarily as a partner in Daibes projects.

This is not even the first time Lita has dabbled in global politics.

In 2019 Open Secrets reported that his family construction company had helped finance a lobbying campaign on behalf of an Albanian official banned from entering the United States for his involvement in public corruption. The same article revealed that Lita had incorporated an import/export business in Albania with Korab Lita, who Albanian outlets identified as a member of the Balkan nation’s parliament.

Gazmend Lita’s relationship to this official is unclear, although the name of the Albanian enterprise is the same as that of his U.S. building firm: Lita Brothers.

A mistrial spared Menendez conviction on bribery charges related to a different political donor in 2017.