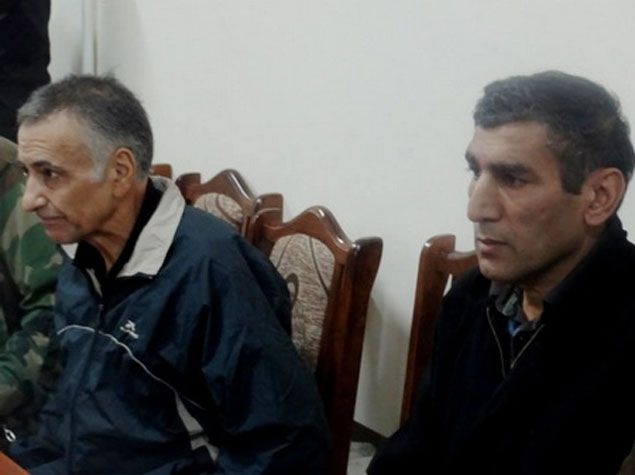 The European Court of Human Rights has initiated a communication upon a lawsuit filed by Firuza Askarova and Albina Veselova, the spouses of Dilgam Asgarov and Shahbaz Guliyev who were taken hostage by Armenian forces in the Armenian-occupied Kalbajar district in 2014, attorney Fariz Namazli told APA.

The ECHR has addressed questions to the Armenian government with regard to the violation of articles 3 (No one shall be subjected to torture or to inhuman or degrading treatment or punishment.), 5.2 (Everyone who is arrested shall be informed promptly, in a language which he understands, of the reasons for his arrest and of any charge against him.), 5.3 (Everyone arrested or detained in accordance with the provisions of paragraph 1 (c) of this Article shall be brought promptly before a judge or other officer authorized by law to exercise judicial power and shall be entitled to trial within a reasonable time or to release pending trial. Release may be conditioned by guarantees to appear for trial.), 5.4 (Everyone who is deprived of his liberty by arrest or detention shall be entitled to take proceedings by which the lawfulness of his detention shall be decided speedily by a court and his release ordered if the detention is not lawful.), 6.1 (In the determination of his civil rights and obligations or of any criminal charge against him, everyone is entitled to a fair and public hearing within a reasonable time by an independent and impartial tribunal established by law. Judgment shall be pronounced publicly but the press and public may be excluded from all or part of the trial in the interests of morals, public order or national security in a democratic society, where the interests of juveniles or the protection of the private life of the parties so require, or to the extent strictly necessary in the opinion of the court in special circumstances where publicity would prejudice the interests of justice.), 6.2 (Everyone charged with a criminal offence shall be presumed innocent until proved guilty according to law.), 6.3 item a (Everyone charged with a criminal offence has the following minimum rights: to be informed promptly, in a language which he understands and in detail, of the nature and cause of the accusation against him;), 6.3 item b (to have adequate time and facilities for the preparation of his defense;), 6.3 item e (to have the free assistance of an interpreter if he cannot understand or speak the language used in court.), 8 (Everyone has the right to respect for his private and family life, his home and his correspondence.), 2nd article of the protocol No.4 (Everyone lawfully within the territory of a State shall, within that territory, have the right to liberty of movement and freedom to choose his residence.), if this liberty of movement is considered as a criminal action according to the 7th article, 14 article (The enjoyment of the rights and freedoms set forth in this Convention shall be secured without discrimination on any ground such as sex, race, color, language, religion, political or other opinion, national or social origin, association with a national minority, property, birth or other status.).

The women’s rights are being defended by Anar Baghirov.

The court has also demanded the government present documents on the health conditions of Dilgam Asgarov and Shahbaz Guliyev.