Erdoğan invites US authorities to inspect evidence on 1915 events 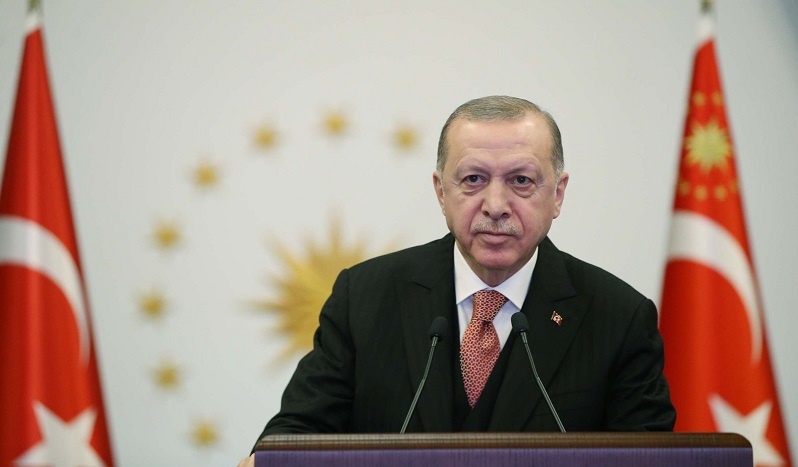 "I hereby call upon US authorities to come to Turkey and inspect our evidence with regards to 1915," President Recep Tayyip Erdoğan said in a press conference late Monday after a cabinet meeting, in sharp criticism of U.S. President Joe Biden's recent recognition of 1915 events as "genocide."

"I am speaking based on evidence, unlike Biden. We have over 1 million documents related to the 1915 events in our archives. I am wondering how many documents the United States has," he said.

"Armenian gangs, who were at least 150,000 to 300,000 people, carried out massacres in Turkish territory. Furthermore, they partnered with Russian forces to fight against us. Ottoman authorities took precautions," he said, underlining the crimes perpetrated by the Armenian gangs at the time.

"Turkey's stance hasn't changed. 1915 events can only be enlightened by historians, not politicians. We have yet to receive a response from our counterparts on our offer to set up a joint history committee, even though we have guaranteed to keep our archives open," he said.

"US President Biden's biased statement on 1915 events is destructive for Turkish-American bilateral relations. We believe that Mr. Biden's statement was due to pressure from radical Armenian figures," he added.

"The relocation of Armenians was within the Ottoman Empire, not deportation to another country. A week's time was given to prepare and those with an excuse were exempted from the relocation," Erdoğan said.

The President also underlined the U.S.' past crimes, including the Vietnam War, the nuclear bombs dropped on Japan, and others, emphasizing that there were many incidents in U.S. history that could be labeled as "genocide."

"We have nothing to learn from anybody on our own past. Political opportunism is the greatest betrayal of peace and justice. We entirely reject this statement based solely on populism," Çavuşoğlu said in a Twitter post.

With the acknowledgment, Biden followed through on a campaign promise he made a year ago. Mainly hailing from Ottoman Armenians, Armenians in the U.S. constitute significant communities in East Coast and California.

Turkey's position on the 1915 events is that the death of Armenians in eastern Anatolia took place when some sided with invading Russians and revolted against Ottoman forces. A subsequent relocation of Armenians resulted in numerous casualties, added by massacres from militaries and militia groups of both sides. The mass arrests of prominent Ottoman Armenian politicians, intellectuals and other community members suspected of links with separatist groups, harboring nationalist sentiments and being hostile to the Ottoman rule were rounded up in then-capital Istanbul on April 24, 1915, commemorated as the beginning of later atrocities.

Turkey objects to the presentation of the incidents as "genocide" but describes the 1915 events as a tragedy in which both sides suffered casualties.

Ankara has repeatedly proposed the creation of a joint commission of historians from Turkey and Armenia plus international experts to tackle the issue.