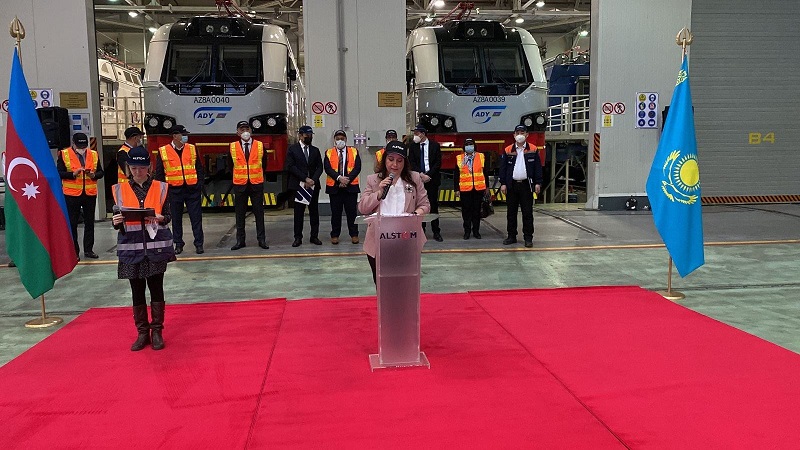 The last two (39th and 40th) locomotives of France's Alstom company successfully passed all required tests and will be delivered to Baku in the coming days, Azerbaijan Railways CJSC (ADY) Spokesperson Natavan Bayramova said on Wednesday.

She made the remarks at the solemn ceremony of delivery of Prima T8 AZ8A freight locomotives under a contract with Azerbaijan Railways, in Nur-Sultan (Kazakhstan), News.Az reports.

According to the spokesperson, the 38th locomotive is currently being transported to Baku.

“The Kazakh side is showing great interest in expanding cargo transportation along the Baku-Tbilisi-Kars railway corridor, the trans-Caspian international transport route, as well as the East-West corridor,” she said.

“Besides, our trade turnover and cargo transportation are only growing every year and we see the need to expand cooperation within the framework of international transport corridors,” Bayramova added.

In 2014, ADY signed a contract with Alstom for delivery of 50 electric locomotives, including 40 Prima T8 AZ8A heavy freight locomotives produced in Nur-Sultan by EKZ, Alstom’s joint venture, and 10 Prima M4 AZ4A passenger locomotives which are produced in French Belfort city and have already been delivered to Azerbaijan.

Alstom’s Prima T8 is one of the most powerful electric locomotives in the world. This model is a two-section freight locomotive with load of 25 tons per axle, capable of towing up to 9,000 tons and running at 120 km/h, with installed continuous power of 8.8 Megawatts. The Prima T8 AZ8A is designed to operate in temperatures ranging from -25°C to 50°C. It requires minimum maintenance and provides high reliability levels and low lifecycle costs thanks to its modular design.

Alstom’s Prima range is covering all market segments of locomotives from heavy-haul, freight and passenger operation and shunting or track-work operation. Over the past 20 years, more than 3,200 Prima locomotives (more than 4,600 sections) have been sold worldwide.