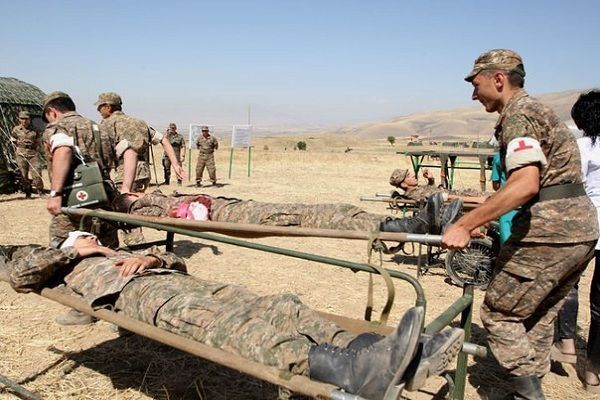 News.Az reprints an article from Trend.

It is a well known fact that the Armenian Army and Armenian military units located in the occupied lands of Azerbaijan are in a deplorable situation and hazing and lack of discipline reign there for many years. The Armenian army officers often abuse their soldiers, as well as steal and sell their clothes and food. There are also many deaths of Armenian soldiers in ‘mysterious’ circumstances.

The Armenian newspaper Hraparak has recently published an interview with a serviceman of one of Armenian military units deployed in the occupied territories of Azerbaijan. The soldier spoke about poor-quality hygiene products given in the army and, consequently, constant requests to parents to send socks, soap, toothpaste and so on. The serviceman also said that to receive the parcels sent by the families, soldiers are required to give 1,000 drams ($2.5).

This interview caused serious anxiety in the military circles of Armenia and the separatist regime. The publication immediately received a call from Karabakh and was required to tell the respondent’s name. The employee of the so-called “prosecutor’s office” from Khankendi added that journalists are obliged to disclose the source, otherwise they “will be criminally liable for a false denunciation.”

Moreover, the military unit was checked. “They even summoned a regiment in Martakert (Aghdara), talked with servicemen, demanding to name the person who gave the interview,” says the newspaper. Obviously, in this way, the Armenian military leadership wants to block sources of leakage and root out the desire of servicemen to give interviews.

This is not the first time that Armenian media have received threats from the government structures. In 2014, the Special Investigation Service of Armenia demanded from Hraparak and ilur.am to inform where they got information about the fact that the head of the Shirak police department Vardan Nadaryan had beaten a wrestler, three-time European champion Artur Aleksanyan. The media refused to name the source and appealed to the Constitutional Court, noting that it is enough for a journalist to disclose the source once, and he will lose confidence of the sources, and the society will lose the right to information.

However, the pressure on Armenian media that disclose criminal facts about the army and the government continues to this day. This once again proves the mendacity of the Armenian authorities who are ranting that they have complete freedom of speech in the country.

Meanwhile, thousands of Armenian soldiers in the country's military units and units located in the occupied Karabakh are counting the days until the term of their military service ends. The lack of discipline is the number-one problem that has not been eliminated there for many years, and it, consequently, causes physical and mental issues of servicemen and even their deaths.

For instance, this June, a sergeant of Armenian army killed his fellow soldiers as revenge for bullying. In July, Junior Sergeant Vardan Melkonyan was found hanged in a military unit. Later, his fellow soldier was arrested on suspicion of committing violent acts against the late sergeant.

In late August, three soldiers serving in the Armenia-occupied Aghdara, the same region where the soldier who gave interview is serving, were brutally beaten by senior ranks and insulted in front of the whole military personnel. The officers beat the hungry and thirsty soldiers because they refused to dig the ground under the sun.

These are a very few of dangerous incidents taking place in the Armenian army almost every day. All this is accompanied by terrible conditions of military service. Due to the wide-spread corruption in the military units, many Armenian soldiers cannot receive even the minimum of the necessary daily provision. The servicemen are fed with poor-quality food, while unsanitary conditions prevail in military units. Contagious diseases, especially the infectious ones are wide-spread there.

All of the above, reasonably, makes Armenian parents try to find any opportunity to keep their sons far from the horror of Armenian army. However, mainly sons of Armenian officials are granted such a privilege. Young men from ordinary Armenian families have to waste two years of their lives in suffering. Their parents, in turn, have to live all this time in a constant limbo, as they cannot be sure their sons will come back home safe and sound, not being killed or crippled by some fellow soldier or officer.