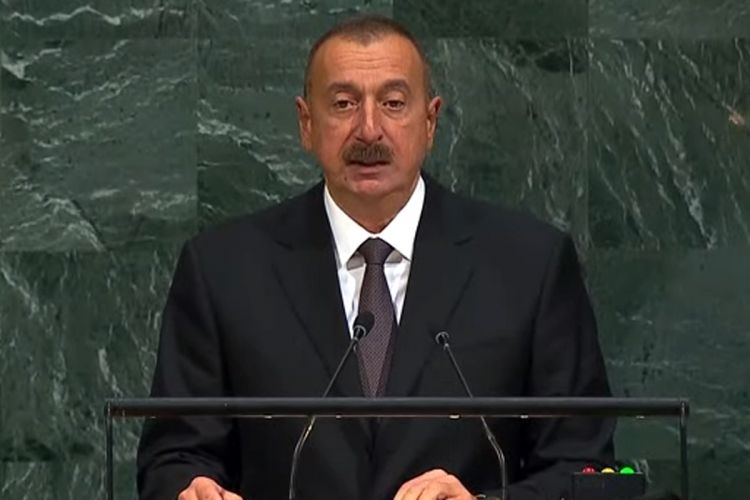 Armenia has been occupying twenty percent of Azerbaijan's territory for more than 25 years, President of Azerbaijan Ilham Aliyev said at the General Debate of the 72nd Session of the UN General Assembly held in New York.

"As a result of Armenian aggression, more than one million of Azerbaijanis became refugees and internally displaced persons,” he said.

The president then reminded about the Khodjaly genocide, committed by Armenia.

"Armenia committed genocide against Azerbaijanis in Khodjaly. The Khodjaly genocide is already officially recognized by more than 20 countries. On February 26, 1992, Armenia committed a war crime, killing 613 peaceful residents, including 106 women and 63 children,” he said.

He noted that one of those war criminals who committed that terrible crime against humanity is current Armenian president. The president recalled that leading international organizations adopted resolutions demanding withdrawal of Armenian troops from the territories of Azerbaijan.

"In 1993, the UN Security Council adopted four resolutions, demanding immediate and unconditional withdrawal of Armenian troops from the territory of Azerbaijan. Other organizations, such as Organization of Islamic Cooperation (OIC), the Non Alignment Movement, the OSCE, Parliamentary Assembly of the Council of Europe and the European Parliament adopted similar decisions and resolutions. Armenia doesn't implement them,” he said.

Armenia has, for 24 years, been ignoring the UN Security Council resolutions and unfortunately, is not punished for that, the Azerbaijani leader stressed.

“In some case, the UN Security Council resolutions are implemented within days. In our case, it is 24 years that the resolutions are not implemented. This is a double-standard approach, and this approach is unacceptable,” said President Aliyev calling for the imposition of international sanctions on Armenia.

“One of the important reforms of the UN must be the creation of mechanism of implementation of the resolutions of the Security Council. Armenia does everything to keep the status-quo unchanged, block substantive negotiations. The co-chairs of the OSCE Minsk Group - France, Russia, the US, on several occasions, stated that the status-quo is unacceptable," he said.

"This policy must be stopped. Such a policy towards the aggressor is not only demonstration of injustice, it also creates the illusion that the Armenian dictatorship can continue its policy of terror," he said.
The Azerbaijani president also reminded the war crime committed by Armenia in April last year.

“Last April, Armenia committed another war crime on the line of contact, attacking our citizen villages. As a result of this attack, six Azerbaijani civilians were killed,” he said. “As a result of successful counter-attack Azerbaijan liberated some occupied territories and installed its national flag on the liberated territories.”

“The Armenian leadership should not forget this lesson. Otherwise, the result of the next Armenian provocation will be more painful for them,” President Aliyev warned.

President Aliyev said that losing on the battlefield, Armenia uses its mean policy of attacking Azerbaijani cities and villages.

“On July 4, 2017, a targeted attack on Alkhanli village in Fuzuli district by Armenia with 82 and 120 millimeter mortars, and grenade launchers, killed two civilians, two-year old Zahra Guliyeva and her grandmother,” he said.

“On August 7, 2017, a 13-year old boy in Tovuz region, bordering with Armenia, was wounded by Armenian soldiers,” noted the president.

He went on to add that Azerbaijan is committed to peaceful resolution of the conflict, but at the same time, will defend its citizens in line with the UN Charter, if Armenian military provocations continue.

“And if necessary, we will punish once again the aggressor, as it was done in April of 2016. Armenia-Azerbaijan Nagorno-Karabakh conflict must be resolved on the basis of international law, relevant UN Security Council resolutions, and territorial integrity of Azerbaijan must be completely restored,” said the president.