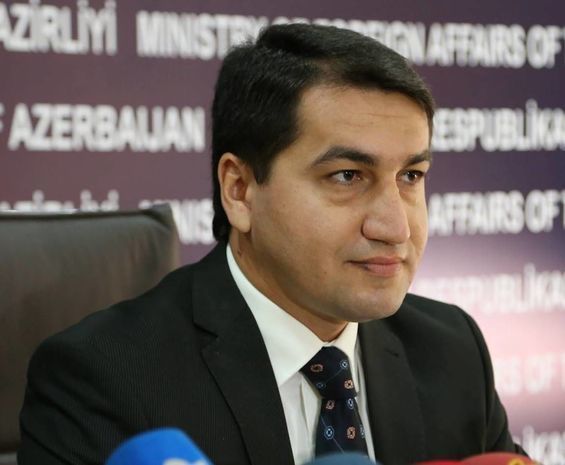 On December 16, the Armenian foreign minister made a statement in which he put unjustified accusations against Azerbaijan and Turkey. What can you say about this?

The statement of the Armenian Foreign Ministry once again shows that Armenia doesn’t want civilized relations with its neighbors and still resorts to archaic thinking. Unfortunately, instead of establishing good relations with neighbor countries after gaining independence, Armenia put forward territorial claims against them on the basis of the “Great Armenia” mythical ideology.

As a consequence of this policy, Armenia launched a war against Azerbaijan, occupied 20 percent of Azerbaijan’s territories, and committed bloody ethnic cleansing against more than one million Azerbaijanis living in Armenia and in the occupied territories. Open territorial claims against Turkey are put forward in the Armenian constitution. The controversial and mythical ideology of “Armenian Highlands” stipulates territorial claims against neighboring Iran and Georgia.

As a consequence of this feudal and fascist policy, today Armenia is a country that has isolated itself in the region. One cannot even imagine Armenia as an independent country. During Serzh Sargsyan’s presidency, Armenia’s self-isolation has worsened. The country’s external debt exceeded GDP by several times. The country is in a social, economic and demographic crisis.

In such a situation trying to show Azerbaijan and Turkey as Armenia’s enemies, the Armenian ruling regime tries to deceive the people of Armenia.

The statement of the Armenian Foreign Ministry alleges that there is no resolution for the Armenia-Azerbaijan Nagorno-Karabakh conflict.

This does not lend itself to any explanation. In accordance with Article 4 of the UN Charter, all states should refrain from harassing and using force in any way incompatible with UN’s purposes against the territorial integrity and political independence of another state. Despite its commitment to the Charter of the United Nations, Armenia used military aggression against Azerbaijan.

Resolutions 822 (1993), 853 (1993), 874 (1993) and 884 (1993) of the UN Security Council on the Armenia-Azerbaijan Nagorno-Karabakh conflict draw the legal framework for political process in the conflict settlement based on international law, including the relevant principles of international humanitarian law.

Under a document on the mandate of the OSCE Minsk Group, dated March 23, 1995, the co-chairs should base their activity on relevant resolutions of the UN Security Council, the decisions of the Budapest summit of the OSCE, and the Helsinki Final Act.

The statement of the Armenian Foreign Ministry also touches upon the “Armenian genocide”.

This once again shows that Armenia is a prisoner of a fake past and doesn’t look to the future. The so-called Armenian genocide is a vivid example of historical fraud and the use of this fraud for political purposes. It is interesting that the Armenian side refuses to open the historical archives and doesn’t allow historians from Turkey and Armenia to objectively investigate this issue.

Armenian diasporas and lobbyists in Western countries, instead of contributing to the development of Armenia's relations with neighbor states, push Armenia to strife and hostility with its neighbors.

Speaking about the so-called Armenian genocide, the Armenian side is trying to keep silence about the atrocities committed by Armenians in Anatolia during the First World War as well as the massacres that were committed in Baku in March 1918, known as the March Massacres. Also, Armenians, who falsified the history of 100 years ago, are trying to escape responsibility for the Khojaly tragedy committed in 1992 with the direct involvement of Armenia’s political and military leadership.

ASALA terrorists, who committed terror acts against Turkish diplomats in the 1970s and who began terror acts against Azerbaijan in the 1980s, today are national heroes of Armenia. One of them is Monte Melkonian. Another war terrorist, Varoujan Garabedian, who committed a terror act against Turkish Airlines in Orly Airport in Paris in 1983, was freed under uncertain circumstances in France in 2000 and is now living freely in Armenia and is promoted to a national hero.

It is a pity that ethnic hatred against neighboring nations is a state policy in Armenia.

The Armenian side also points to the closed border between Turkey and Armenia.

Verily Armenia is responsible for the closure of the Armenian-Turkish borders. Based on norms and principles of international law and the UN Charter, Turkey closed its borders to Armenia due to Armenia’s vivid aggression against Azerbaijan and the occupation of Azerbaijani territories. In particular, this happened immediately after the Armenian military attack to occupy the Kalbajar district of Azerbaijan. The UN Security Council adopted resolution 822 condemning the occupation of Azerbaijan’s Kalbajar and other territories by Armenia. This fair position of fraternal Turkey is highly appreciated by the Azerbaijani people.

In addition, Armenia puts forward territorial claims and accusations of the so-called genocide against Turkey. The Armenian side is wrong to believe that everyone will turn a blind eye to its aggression, occupation, bloody ethnic cleansing, and unfounded accusations against neighbors. Pakistan, Saudi Arabia, Djibouti and other states have not established diplomatic relations with Armenia in connection with its aggression against Azerbaijan.

What should be done to ensure lasting peace and security in the region?

Armenia must end occupation and withdraw its troops from the occupied territories of Azerbaijan in accordance with the UN Security Council resolutions, and put an end to unreasonable demands against neighbor states, including Turkey. Armenia should finally establish civilized relations with neighbor states.