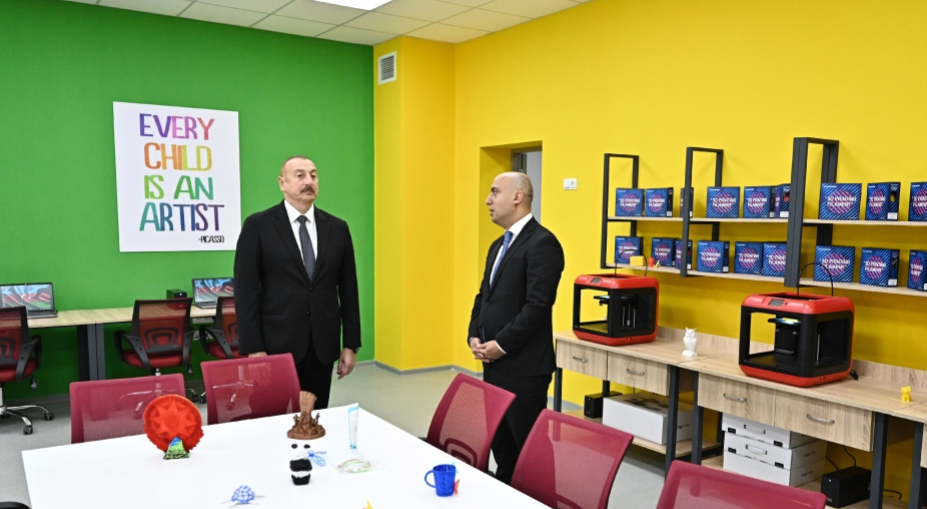 President of the Republic of Azerbaijan Ilham Aliyev has viewed conditions created at the newly-built secondary school No2 in Saray settlement, Absheron district, News.az reports.

Minister of Science and Education Emin Amrullayev informed the head of state of the conditions created at school.

The school, built in 1963, used to operate with a capacity of 550 students. The reconstruction of the school was carried out according to the “Distribution of funds intended for state investment (capital investment) in the 2020 state budget of the Republic of Azerbaijan” approved by a Decree of President Ilham Aliyev dated 30 December 2019. On the basis of this program, the construction of a new school building with a capacity of 2,000 students was started in Saray settlement in January 2021. The area of the school, built in line with the most advanced international standards, is 21,000 square meters. The reconstructed school has 70 classrooms, six laboratories, five computer classes, a pre-conscript military training room, music, fine arts and technology rooms, as well as a library, an assembly hall, two gymnasiums, and a canteen. The building, fitted with the most sophisticated equipment, has all the conditions for the provision of high-quality education. Two preschool offices will also operate in the educational center. A STEAM center has also been established in the general education institution.

The head of state viewed the school.

The STEAM center is equipped with an electronic board, a computer, a 3D printer, teaching aids, electronic components, and stationery. It also has an engineering workshop, a drone flight room, training and robotics rooms.

The construction of the new building of secondary school No2 in Saray settlement, which meets the most modern standards, is further evidence that educational reforms are continuing thanks to the attention and care of President Ilham Aliyev. The measures associated with major repairs and reconstruction of schools are carried out according to plan laid out in the State Program on the socioeconomic development of Baku city and its suburban settlements. First of all, this ushers ample opportunities for students to get a high level of education and master the secrets of science.