Ronald Reagan would say to Putin: There you go again! (OPINION) 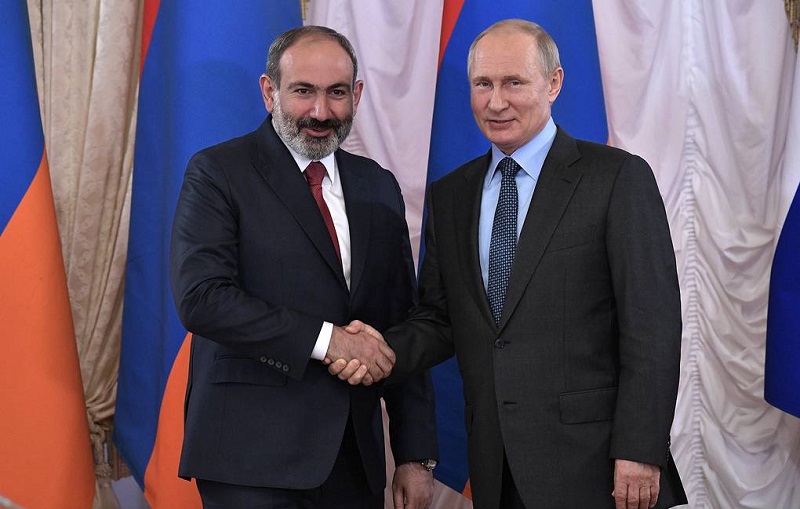 U.S. portal has published an article titled “Ronald Reagan would say to Putin: There you go again!”

"Almost every day since July 17 bird watchers around Armenia’s main airport in capital Yerevan, watch as giant IL-76 Russian military transport planes land with crates of weapons and ammunition — for Armenia’s army. The planes do not fly directly from Russia to Armenia, that would necessitate permission from the Republic of Georgia. It refuses to grant transit permission to Russia. Instead, they make a long roundabout via Iran to get to Armenia.

In simple terms, the Tovuz region is 300 kilometers away from the Karabakh region of Azerbaijan, which has been the main theater of Armenia-Azerbaijan armed conflict for nearly 30 years. In the early 1990s, Armenia, assisted by Russia, invaded and ethnically cleansed Azerbaijan’s Nagorno-Karabakh region and seven surrounding districts, totaling 20 percent of Azerbaijan’s sovereign territory.

Despite regular shellings by Armenian forces, until July 12 armed hostilities had not occured in areas outside the 1994 ceasefire-created line of contact between the armies of two countries.

So why did the Armenian shelling occur where and when it did? According to well-informed observers, the deadly Armenian barrage that killed 15 Azerbaijani soldiers and a 76-year-old civilian was intended to be a notice that this vital area of Azerbaijan that has multi-million dollar oil and natural gas pipelines to the West is vulnerable.

Through these pipelines flow Azerbaijani oil and natural gas to Turkey, Israel, the Balkans and soon to Italy and Western Europe. By this October, the newest natural gas pipeline will start delivering to Europe and its longstanding Russian natural gas monopoly will be dented causing Russian political influence and foreign exchange revenue to contract.

The alarm and concern about Russia flooding Armenia with weapons and ammunition was brought up in a phone conversation Azerbaijan’s President Ilham Aliyev had with his Russian counterpart Vladimir Putin.

Putin immediately dispatched his Defense Minister Sergey Shoygu to Azerbaijan to inform President Aliyev that there was nothing to worry about. Shoygu said the planes were delivering “construction materials” to be used for “construction projects” at the huge Russian Army base in Armenia at Gyumri, which is one of the largest Russian military bases in the world with over 5,000 troops.

While in Baku, Shoygu was asked why these flights are routed through Kazakhstan, Turkmenistan and Iran, a distance four or five times the direct flight mileage from Russia to Armenia.

Why the lies? If the shipments were really of “construction materials” wouldn’t the Republic of Georgia have encouraged the shipments by rail across it so it could collect transit fees? Of course it would have.

But the best information is that Russia never asked for transit permission because the request would have exposed weaponry and ammunition not “construction materials.”

Baku said the Russian explanation was not satisfactory.

Why weapons and ammunition and how is Armenia paying for them?

Armenia’s government has no money. A third of its GDP is in the form of remittances from Armenians in Russia, France and the United States (Los Angeles, in particular). By way of comparison, Mexico is famous for its remittances from the United States that total several billions of dollars but are just 2% (two percent) of its GDP (before Covid-19).

Russia pays rent for its army base and an air force base in Armenia and grants “credits” to Armenia to buy missiles, artillery and ammunition from Russia. The “credits” are never paid. Russian border guards man Armenia’s borders with Georgia, Azerbaijan, Turkey, and Iran. Russia handles Armenia’s air defenses, hence a Russian air base in Armenia. A Russian Army general is in charge of Armenia’s Army. Even Armenia’s Consul General in Los Angeles from 2013 to 2018 was a Russian citizen, in fact, a famous Russian “oligarch.”

Unlike Azerbaijan, Armenia is a member of the Russian-led military block Collective Security Treaty Organization that positions itself against NATO.

The question “why” answers itself. With these weapons and ammunition shipments Russia is preparing Armenia for a second war against Azerbaijan.

Armenia and its US lobby are blaming Azerbaijan for the July 12 combat Armenia itself initiated. That lobby includes U.S. Congresspeople, such as Adam Schiff, Brad Sherman, Frank Pallone, Judy Chu and others amply nurtured by Armenian campaign funds for the coming election. Notwithstanding the election, the 500 tons of weapons and ammunition being delivered as “construction materials” by Russia are significant; they are to help extend Russian presence in the region that will, by this time next year, be significantly shrinking Russia’s long standing monopoly in oil and natural gas deliveries to Europe.

That will shrink the riches of the world’s richest man, Vladimir Putin. Washington should take a note and act accordingly.