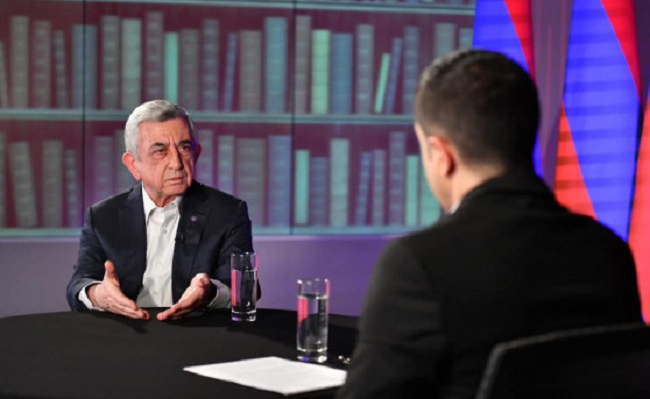 Armenia’s former president Serzh Sargsyan spoke about the country’s use of Iskander operational-tactical missile systems during the 44-day war in Nagorno-Karabakh.

In his interview with Armnews, Sargsyan said he does not agree with the statements that Iskander had not been used by Armenia during the war.

“I do not quite agree that Iskander was not used. I have reliable information that Iskander was used. It was used in the last period of the war, and more specifically in the direction of Shusha,” the former president noted.

Sargsyan acknowledged that missiles were fired at Shusha after the liberation of the city by the Azerbaijani Army.

Sargsyan linked Armenia’s failure to strike the territory of Azerbaijan from Iskander with the possibility of retaliatory actions.

“In case of strikes, perhaps the opposite side would retaliate. I suppose it [Iskander] was not used for fear of retaliation. It should have been used on the fourth or fifth day of the war, when Azerbaijan had accumulated a huge amount of manpower, military equipment in Horadiz and in other directions,” he added.

Furthermore, Sargsyan did not agree with the views that the Armenian armed forces did not launch attacks on the territory of Azerbaijan using other weapons. He admitted that the missile and artillery strikes on Azerbaijan’s Ganja city and other residential areas located far from the zone of hostilities were deliberately launched, and the civilian population was targeted.

“You remember that a boastful person said that he had ordered the destruction of Kirovabad [Azerbaijan’s Ganja city] airdrome. However, the fire was opened on a residential area of the city, not on a military facility,” Sargsyan added.

Sargsyan called it ‘the biggest stupidity’, stressing that Khankendi and Khojaly were fired upon after the attack on Ganja.

“I’m not saying that Stepanakert [Khankendi] had not been fired before, but that fire was aimed at two targets – military headquarters and power plants,” he said.

Reemphasizing that Iskander had to be used, the former president noted that first of all, it was necessary to target oil and gas pipelines.

“Why we did buy Iskander? So why did we get Iskanders, if we did not want to use them at the right time? We are the only one our ally provided I do not understand whether to use such a weapon,” he concluded.